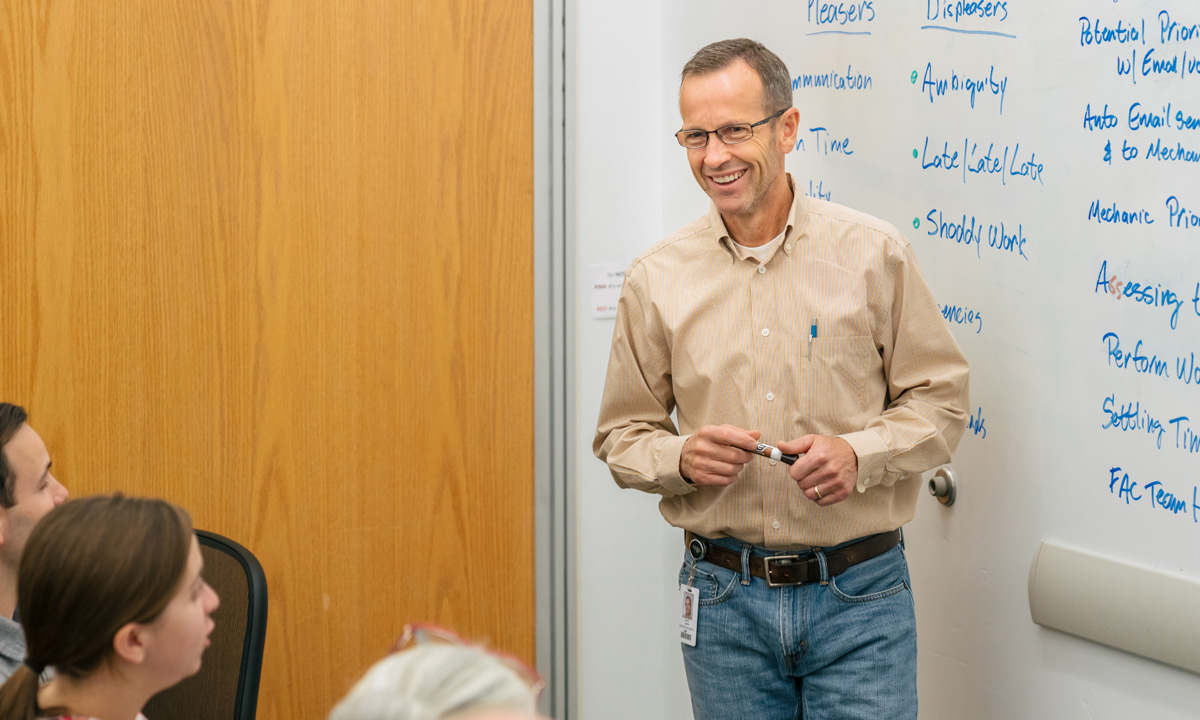 The work was overwhelming. How could it change?

Each day, the lab had an overload of specimens that seemed to need culturing before reading. Specimen cells were put into wet media and left to divide before being processed; the resulting slowdown on such a large volume of work made deadlines difficult to meet.

Lab leaders asked themselves: How can we reduce waste, make our jobs easier, and deliver better patient care via efficient results?

“If the job is easier, we’ll make fewer mistakes. If we don’t make mistakes, it’ll be faster. And if it’s faster, it’s cheaper.”


As they reviewed processes, they realized that while some specimens required culturing to be read, others in fact could be processed without it.

The change sounds simple, but even a small change can make a huge difference in a busy lab, notes David Layton, supervisor, Improvement Engineering, ARUP.

“Easier, better, faster, cheaper, in that order, is how ARUP works to achieve,” he says, repeating part of the mantra of the process improvement method Lean Six Sigma. “If the job is easier, we’ll make fewer mistakes. If we don’t make mistakes, it’ll be faster. And if it’s faster, it’s cheaper.”

The lab leaders found it was possible to reduce cultures by 90 percent—speeding up processes and saving the lab $40,000 annually. They achieved the savings and made work more pleasant, with the possible result of decreasing employee turnover. The lab was able to reduce the inefficiencies that result from having to search for and train new employees, Layton says.

Layton talked about this example from ARUP’s Cytogenetics Laboratory at the recent Lab Quality Confab, Oct. 8–10. It is part of ARUP’s Best in Class improvement initiative, made one division at a time since early 2015. Along with others in ARUP’s Quality Department, Layton has reported on the changes—with their successes and failures—since gathering the idea for change from a 2014 Confab presenter.

This year, Layton talked about the power of involving individuals. “If we get our powerful people involved and driving change, we’re far better able to become a ‘transformation organization,’” he says, describing an organization that changes from the inside out and therefore struggles less with the process.

ARUP wants to share knowledge with labs looking to make improvements, being honest about any failures, says Layton. “This year, a conference attendee commented that she likes that we’re honest; we don’t tell just the wins, but also the setbacks. It’s not always going to work just perfectly. We’ve made mistakes, as you can well imagine.”

A change rollout with one division hasn’t rolled out yet, for instance, he says. Lab leaders wanted help managing the work, without changing the way they thought, but the Quality Department didn’t notice the disparity until rollout time neared. “We learned that the visions need to mesh, from the start. The quality leaders need to make sure that they and the lab leaders are on the same path,” notes Layton, who has faith that they can do things differently next time.

Meanwhile, he and the others in the Quality Department are working to learn more about change each year, and taking that knowledge back to the annual Quality Confab—honestly and forthrightly, says Layton.

"[VIDEO] Safe Specimens, Six Sigma, A Very Safe Box: Here’s How to Use It"