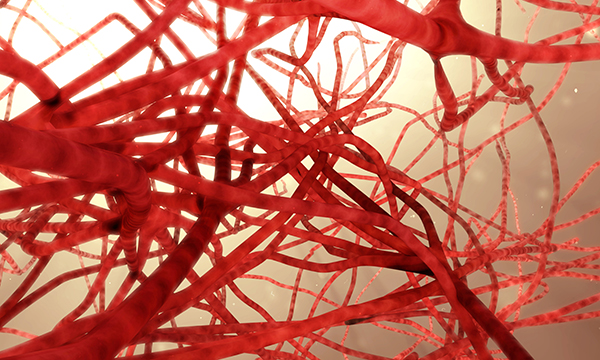 Often the first clue to a diagnosis is visible, if clinicians and patients know what to look for. This is usually the case for people who have capillary malformation-arteriovenous malformation syndrome (CM-AVM), a disorder that affects the vascular system. If undetected, this blood vessel disorder can be deadly.

Recently, three scientists at ARUP published a study in the journal Genetics in Medicine that shows how symptoms of CM-AVM can be distinguished from a similar disorder, hereditary hemorrhagic telangiectasia (HHT). Though the two disorders are similar, the signs and symptoms, and treatment for each may differ so it is important to differentiate one from the other.

In ARUP’s genetics and genomics lab, investigators determined that the cohort of patients in the study had a mutation in one of the two genes associated with CM-AVM.

Clinicians may order genetic testing on patients they suspect have CM-AVM if a family member has been diagnosed with the disorder or if the patient shows symptoms of CM-AVM. Physical symptoms include red dots (capillary malformations and telangiectases) around the mouth, torso, arms, and/or legs.

Capillary malformations typically look like pink (rather than brown) birthmarks, and telangiectases are pink to red pinpoint size dots. Some individuals just have one or two of these red dots while others may have hundreds. They typically show up during early childhood and increase in number as patients age.

“The study published this year by our group adds significantly to the understanding of these two blood vessel disorders from both a laboratory testing and clinical perspective,” says Jamie McDonald, MS, an ARUP genetic counselor and co-founder of the HHT Center for Excellence at University of Utah Health. “We want to help physicians tell the difference between these two blood vessel disorders [HHT and CM-AVM] based on how and where it appears on the skin.”

The published study was a collaboration between McDonald, ARUP medical director Pinar Bayrak-Toydemir, MD, PhD, and scientist Whitney Wooderchak-Donahue, PhD.  “Patients with CM-AVM, like HHT, may have minor skin lesions that are often overlooked, yet they can end up having an avoidable brain hemorrhage if not properly diagnosed,” says Bayrak-Todemir. “It’s like a ticking bomb, which is why it is so important for the patient and their family to know if they have the disorder.”

“With this new information, we’ve refined our next-generation sequencing panels for HHT and CM-AVM by adding the new gene (EPHB4),” says Wooderchak-Donahue, key investigator on the study. “This will provide genetic information to help physicians distinguish between the two disorders.”

Although both CM-AVM and HHT put a patient at risk for brain AVMs and associated brain hemorrhage, HHT is also associated with AVMs in additional internal organs such as the lungs and liver as well. This is why good clinical evaluation and genetic test confirmation are so important. Once the diagnosis is confirmed, physicians can run appropriate imaging tests to identify any worrisome blood vessel malformations hidden inside the body. And since these are hereditary disorders, close family members (children, siblings, parents) can then be tested and screened as well.

Nosebleeds And Why To Test for HHT
https://www.aruplab.com/news/08-14-18/HHT-As-Common-As-Cystic-Fibrosis

What Is It Like Working as A Genetic Counselor for a Large Laboratory?
https://www.aruplab.com/news/10-04-2018/ARUP-Genetic-Counselor-Wiley