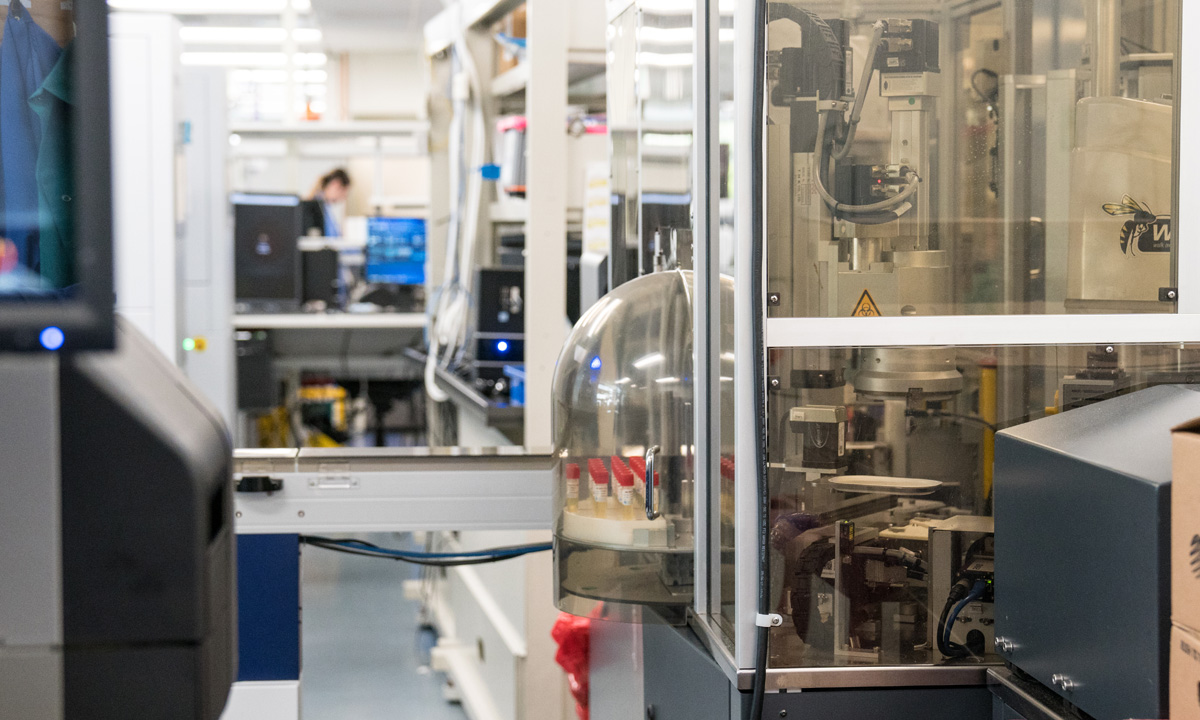 Tarzan the robotic arm reaches for the red-toned plate, flat like a hockey puck. In a split second, it determines that the specimen is the correct type for processing at the specified temperature in the WASPLab, an automated process in an ARUP Laboratories microbiology lab. The arm called Jane then streaks the specimen onto agar media and sends it to incubate for 24 hours.

For decades, microbiologists have done all this work by hand even as robotics and automation began to improve other laboratory processes. Until recently, the delicate techniques necessary to introduce mechanisms to microorganism study (microbiology) and analysis have been challenging for these divisions to automate.

“You put specimens onto the machine, then you can walk away. It gives you more time for thoughtful analysis.”


That’s changing with the ARUP Bacteriology Laboratory’s purchase and validation of a polished new system from Copan Diagnostics that receives patient specimens and sends them through the process, finally enabling technologists to view their culture growth on a digital screen. This Walk-Away Specimen Processor (WASP) will bring new efficiencies and possibly shorten turnaround time, notes Rhonda Hensley, assistant vice president and group manager, Technical Operations Infectious Diseases, ARUP. She says the WASPLab lessens the chance of slowdowns or mistakes. Normally, technologists are in and out of traditional incubators—the areas where specimens incubate for 24 hours after being streaked onto agar media using a metal loop—all day long. That can interfere with the growing colonies on each specimen in the incubator; the colonies may take longer to grow as a result.

“Culture results may take less time to go positive, shortening turnaround time,” notes Hensley. By the same token, in traditional microbiology, the culture plates can sit on a benchtop while technologists review other cultures at their desks or on their computers. The WASPLab’s incubators are enclosed, and the cultures are not exposed until the technologist recognizes from the culture’s digital onscreen image that growth has taken place.

There’s more, too: After incubation, WASPLab photographs the plates again and returns them to the incubation space. Then, software in the WASPLab groups cultures that show no growth, allowing the technologists to focus on the positive results. After technologists review culture growth via digital screen, they can request that the automated system bring the plates to the bench. The WASPLab can dispose of the no-growth cultures in the garbage.

The automation also reduces staffing pressure. At a time when hiring enough experienced laboratory technologists is a constant stress, this automation will allow the Bacteriology Laboratory to process specimens with fewer employees. “Microbiology technologists generally train for two years to be fully qualified; knowing that, it’s really helpful that the WASPLab will allow us to get the same amount of work done with fewer people,” says Hensley.

Removing the slower processes from technologists’ hands will allow them to do other things, too. “This is exciting,” says Natali Baker, technical supervisor, Special Microbiology, ARUP. “You put specimens onto the machine, then you can walk away. It gives you more time for thoughtful analysis.”