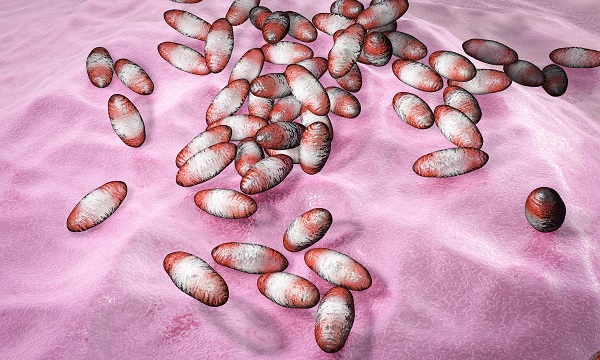 The plague's bacterial agent (pictured here) is one subject of ARUP medical director Mark Fisher's five-year National Institutes of Health grant. So is something more contemporary.

The plague—that Black Death and bacterial lurker of the Middle Ages and certain parts of the southwestern United States and Africa—provides a subject for Mark Fisher’s current National Institutes of Health (NIH) grant-funded project. That and the role of antimicrobial resistance in the disease’s transmission.

Fisher will research certain genetic mutants of the bacterial agent (Yersinia pestis, or Y. pestis) that causes the plague. These mutations are susceptible to some antimicrobial peptides (compounds consisting of two or more amino acids linked in a chain), and are also unable to maintain an infection in a flea.

“We’re nearly finished with a comprehensive mutant library to look for new mechanisms of antimicrobial resistance…the mutants identified should help us understand more about how this relationship works.”


Fisher, PhD, an ARUP medical director in the Bacteriology and Special Microbiology labs, and an associate professor of pathology at the University of Utah, will continue to lead the $1.9 million study for the next four years. Here, he tells us more about that work.