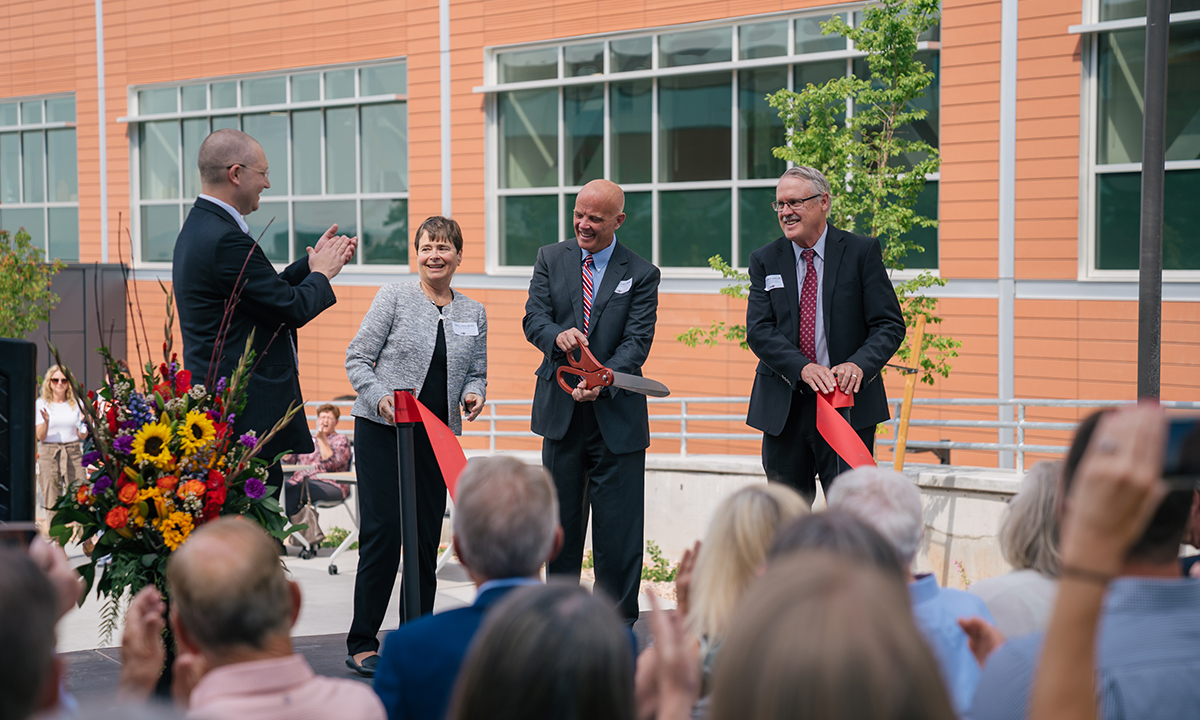 SALT LAKE CITY—ARUP Laboratories, one of the nation’s largest reference laboratories, today held a ribbon cutting ceremony to officially open its new four-story, 220,000-square-foot laboratory facility in Salt Lake City. ARUP employees, executives, and board members were on hand for the celebration, along with University of Utah leaders and Utah public officials.

The newly constructed facility, located in University of Utah Research Park, is the crown jewel of eight properties ARUP now owns and operates as Research Park’s largest resident. Designed to optimize quality laboratory testing, it features total lab automation to further increase testing capacity and accommodate future growth at ARUP, which has hospital and health system clients in all 50 states and processes an average of more than 70,000 specimens a day.

“This new building is a culmination of the extraordinary vision ARUP’s founders had when they spun ARUP off from the University of Utah Department of Pathology nearly 40 years ago, believing they could meet the testing needs of patients nationwide with the right medical oversight, leadership, and dedicated workforce,” Theurer said. “It is more than brick and mortar; it is a symbol of what can be achieved through discipline and hard work.”

“From the beginning, ARUP has been committed to delivering the best care possible to patients at University of Utah Hospital and to our clients nationwide,” said CEO Sherrie L. Perkins, MD, PhD, who will retire effective June 30, 2021, after more than 30 years at ARUP. “This new facility enables the practice of laboratory medicine at its highest level.”

The new facility also embodies ARUP’s commitment to environmental stewardship. Designed by Architectural Nexus and built by Okland Construction, it optimizes the efficient use of energy and was specially designed to reduce waste.

“Every aspect of this building’s design and construction occurred with environmental stewardship in mind,” Theurer said.

For more information about the new facility and about ARUP, visit the June 2021 edition of Magnify, ARUP’s online magazine.

Founded in 1984, ARUP Laboratories is a national reference laboratory and a nonprofit enterprise of the University of Utah and its Department of Pathology. ARUP offers more than 3,000 tests and test combinations, ranging from routine screening tests to esoteric molecular and genetic assays. ARUP serves clients across the United States, including many of the nation’s top university teaching hospitals and children’s hospitals, as well as multihospital groups, major commercial laboratories, group purchasing organizations, military and other government facilities, and major clinics. In addition, ARUP is a worldwide leader in innovative laboratory research and development, led by the efforts of the ARUP Institute for Clinical and Experimental Pathology®. ARUP is ISO 15189 CAP accredited.

Photos and video of ARUP’s new laboratory facility are available upon request.