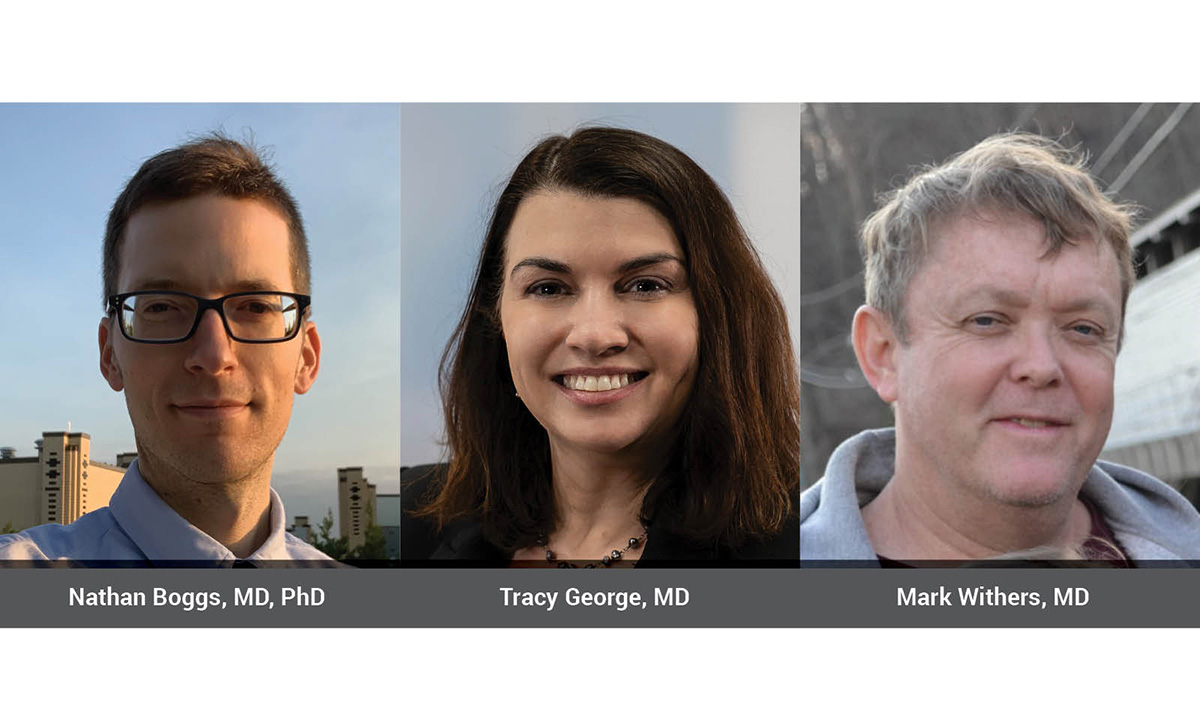 Nathan Boggs, MD, PhD, an assistant professor of medicine at the Uniformed Services University who is engaged in systemic mastocytosis (SM) translational research, helped Mark Withers, MD, obtain a definitive diagnosis of SM after 20-plus years. Tracy George, MD, ARUP Laboratories president and chief scientific officer, has led the effort to develop highly sensitive tests at ARUP that aid in the diagnosis of SM and has played a key role in clinical trials for emerging treatments.

Twenty-two years ago, Mark Withers, MD, was in Kathmandu, Nepal, researching hepatitis E vaccines, when he experienced an inexplicable onset of symptoms. These symptoms—including flushing, nausea, vomiting, headache, sweating, tingling, itching, and a fast heartbeat—were sudden and severe, but they peaked and then dissipated in an hour. After that first episode, the symptoms returned sporadically, about every two years, and always in the middle of the night.

“I would feel really awful, like I was going to die,” Withers said. “These episodes were very puzzling to me. As an internist, I thought I ought to know what they were. Until recently, I could not make heads or tails of what was happening.”

Withers, who spent 16 years researching vaccines for the U.S. Army and was familiar with tropical medicine, unsuccessfully searched for answers while managing his symptoms on his own.

More than two decades later, he finally received a definitive diagnosis: systemic mastocytosis (SM). SM is a rare disorder that occurs when mast cells—a type of white blood cell found in connective tissues—accumulate throughout the body. When these cells become activated during what is known as mast cell activation syndrome, they release tryptase, which causes the affected individual to experience a severe anaphylactoid episode. Individuals with SM can have these episodes at any time without warning, which may lead to dangerous circumstances.

Withers isn’t the only one to endure such a prolonged diagnostic odyssey. According to Tracy George, MD, ARUP Laboratories president and chief scientific officer, who has studied SM for more than 20 years and is a world-renowned expert on the disease, it’s typical for patients to wait years to receive a diagnostic answer.

“One study we collaborated on with The Mast Cell Disease Society (TMS) a number of years back found that, on average, it took patients in their society six to seven years to receive a diagnosis,” George said. “Patients often end up going to different specialists because their symptoms are so diverse, and it really takes a physician or healthcare provider with specialized knowledge to figure it all out.”

The difficulty these patients experience sheds light on the need for accurate—and early—detection of the disease. George, cofounder of the American Initiative in Mast Cell Diseases (AIM), has been integral to efforts to advance the diagnosis and treatment of these conditions.

“Now that we have therapies that are effective in eliminating symptoms and even eliminating the mast cells, it’s critical that these diseases are identified so people don’t suffer,” George said. “You can imagine the consequences of someone having a mast cell activation syndrome episode while they’re flying a plane.”

ARUP, which has one of the largest groups of hematopathologists in the country and some of the world’s leading researchers in the field, has significant resources to research and develop highly sensitive and accurate tests for SM.

Withers’ eventual diagnosis was aided by two events: He experienced an episode that forced him to seek medical treatment, and his case went to Nathan Boggs, MD, PhD, an assistant professor of medicine at the Uniformed Services University in Bethesda, Maryland, who is engaged in SM translational research.

Two years ago, Withers lost consciousness during an episode, which prompted his wife to call for an ambulance. Withers was transported to the emergency room and remained at the hospital overnight for observation.

Even then, his diagnosis remained elusive. Alternative diagnoses were considered and then discarded, including carcinoid syndrome and pheochromocytoma. Withers was surprised when one physician began to focus on a red meat allergy theory.

“I’ve loved red meat for many years. I never associated any particular food with these episodes because there wasn’t a consistent pattern,” Withers said.

When Withers challenged the red meat allergy diagnosis, his case eventually drew Boggs’ attention. Boggs is an allergist-immunologist who saw Withers in his clinic at the Walter Reed National Military Medical Center in Bethesda, Maryland. Boggs suspected that the red meat allergy diagnosis was a red herring, so Boggs ordered blood work and performed a bone marrow biopsy to further evaluate Withers’ condition.

“There are a number of high-complexity tests, specifically flow cytometry and polymerase chain reaction (PCR)-based genetic tests for mastocytosis performed on blood and bone marrow, that are only offered in a few reference labs,” Boggs said.

George, along with other experts at the University of Utah and ARUP, has led the effort to develop highly sensitive tests at ARUP that aid in the diagnosis of SM. One of these tests includes KIT (D816V) Mutation by ddPCR, Quantitative, a digital droplet polymerase chain reaction (ddPCR) test that is an effective screening tool to detect the KIT D816V mutation, the primary genetic factor that may predispose some individuals to develop SM. This test is the first of its kind that can be performed on peripheral blood, which enables effective, noninvasive screening to determine whether more invasive tests are necessary. ARUP first launched the test in 2020.

“ARUP developed the first clinically available digital droplet quantitative PCR test for KIT D816V. It was the first largely available high-sensitivity KIT assay offered by a reference laboratory in the United States,” George said. “We use ultrasensitive methods, and our sensitivity is 0.03% in blood, which is 100-fold more sensitive than next generation sequencing (NGS) methods.”

Boggs initially relied on a qualitative test from another laboratory in his efforts to diagnose patients with SM, but he found greater success with the quantitative KIT D816V test that ARUP offers.

“For this high-complexity mutational test, the standard really should be quantitative PCR. How much of the variant is present is important because multiple studies have shown that the higher the variant frequency in the blood and bone marrow, the higher the likelihood that person will have a more aggressive disease,” Boggs said.

Another method to detect the presence of neoplastic mast cells and any other abnormality is to use flow cytometry, a testing method that interrogates cells individually by passing them through a flow cytometer in a single-file line to investigate the cell’s characteristics.

“Regular flow cytometry that we perform on blood and bone marrow will detect different cell populations. But when you’re looking for rare events, such as mast cells, you need to use specialized gating strategies and collect well over a million events,” George said.

David P. Ng, MD, an ARUP medical director of Hematopathology and an expert in flow cytometry, played a key role in the development of a mast-cell tube for flow cytometry detection.

“Mast cells are relatively rare in bone marrow, and they are not easily detected by flow cytometry because they don’t extract well out of bone marrow. It behooves you to collect a lot of events, an order of magnitude more than what most would, to see where there are mast cells and whether there are abnormal mast cells,” Ng said. “We collect more events than other laboratories—well over a million events, typically about 1.7 million events.”

The sensitivity of ARUP’s panel, according to Ng, is “0.01%. If the phenotype is very discreet, we can do a half log better than that, which is 0.007%.” In addition, ARUP’s test includes CD30, a new aberrancy marker that was recommended last year in addition to CD2 and CD25.

Another key indicator of SM is an elevated basal serum tryptase because tryptase is only made by mast cells, and tryptase concentration correlates with mast cell abundance in the body.

“The combination of a tryptase test and a quantitative KIT D816V test is beneficial for patients. It can provide an idea of how much of the neoplasm is present in a much more sophisticated way,” Boggs said.

Advancing the Diagnosis and Treatment of SM

For patients who have been diagnosed, the severity of their symptoms and their treatment vary based on their subtype of SM, ranging from indolent to advanced and including mast cell leukemia.

“The vast majority of people with SM have indolent disease. For those individuals, there is no U.S. Food and Drug Administration (FDA)-approved treatment. Right now, we rely on symptom-driven care,” Boggs said. “Because many of these are allergic symptoms from the neoplastic mast cells, treatments include antihistamines and other mast cell mediator-directed therapy.”

For those with advanced SM, recent clinical trials for new drugs have promising results and may offer hope to patients. ARUP played a critical role in securing FDA approval for a new precision therapy, avapritinib (AYVAKITTM), which is effective in treating advanced disease subtypes.

George has also been involved in a clinical trial for bezuclastinib, a tyrosine kinase inhibitor (TKI) that has been shown to reduce serum tryptase, mast cell burden, and KIT D816V variant allele fraction.

“We are uniquely positioned at ARUP because, not only do we have the diagnostic tests, but we also have the experts in the diseases as well as a center of excellence in mastocytosis at the University of Utah,” George said.

With more treatment options, it’s also essential for providers to recognize and diagnose the disease.

In his own practice, Boggs recognized that the disease was underdiagnosed. He has led an effort to create a national Military Health System registry for patients with SM.

“We are the first to show how to identify these patients in a methodical way using basal serum tryptase as a starting point,” Boggs said.

A report of the study, “Elevated Basal Serum Tryptase: Disease Distribution and Variability in a Regional Health System,” was published in The Journal of Allergy and Clinical Immunology: In Practice in September 2022.

In addition to the tests already offered, ARUP is working to develop a test for hereditary alpha-tryptasemia, a genetic trait caused by extra tandem alpha-alleles of the TPSAB1 gene that is associated with increased basal serum tryptase levels and mast cell-associated disorders.

For Withers, who is now retired and carries an EpiPen whenever traveling, having an indolent SM diagnosis has given him peace of mind.

“A known is better than an unknown, even if it’s bad news sometimes,” he said. “I’m reassured to know that this is the ‘favorable’ type of mastocytosis. I like the word indolent.”