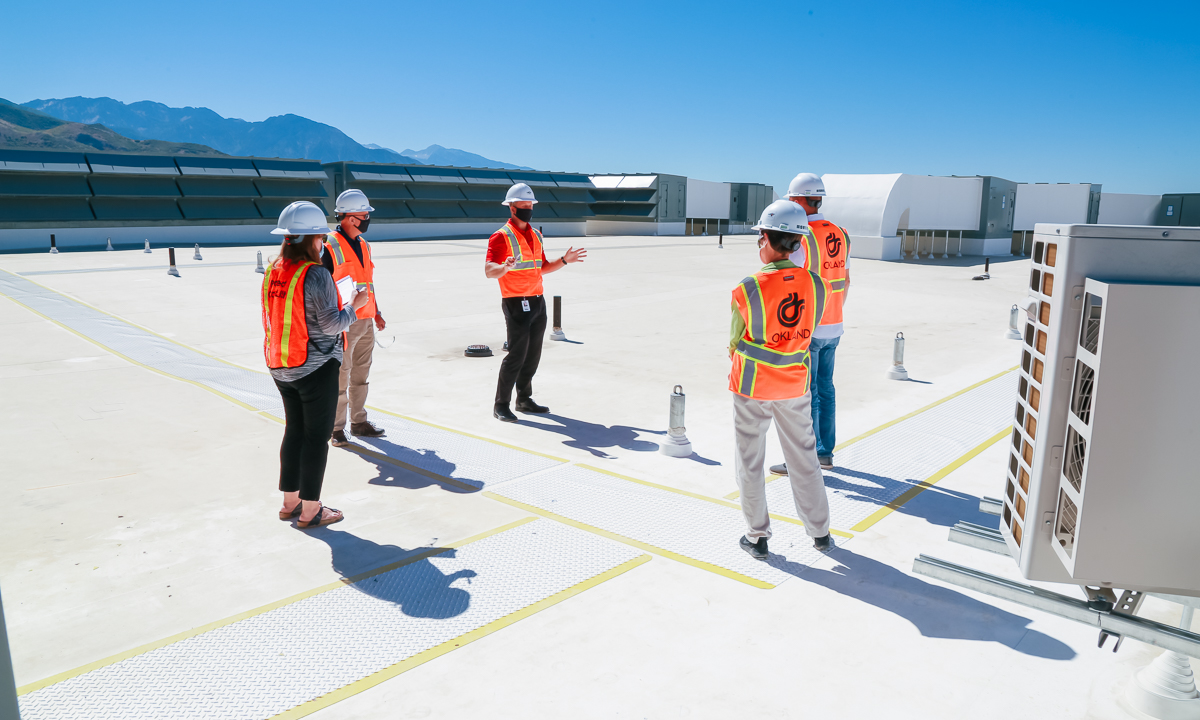 Shafts on the roof of ARUP’s new 220,000-square-foot building are part of a sophisticated energy recovery system that will save money by pulling hot and cool air out as outside air cycles in to keep the building well-ventilated. The hot and cool air can then be reused.

SALT LAKE CITY – Even amid the COVID-19 pandemic, a towering new structure is slowly rising to distinguish the core of University of Utah Research Park. By mid-2021, the four-story, earth-toned building emerging just north of ARUP Laboratories’ existing main facility will be the fully functioning, state-of-the-art epicenter of ARUP’s growing operations.

When COVID-19 hit, ARUP decided to complete the 220,000-square-foot structure all at once rather than in phases to save money, but the company held firm to its commitment to spare no expense to construct the best-planned, most efficient building possible. “We had the opportunity to design the optimal home for large-scale laboratory operations, then make it a reality. That is what this new building is,” ARUP President Andy Theurer said.

The mammoth structure being built by Salt Lake City’s Okland Construction is also the most visible embodiment yet of ARUP’s commitment to environmental stewardship, he said. “We have been very intentional in all aspects of this building’s planning and construction to ensure we are achieving the highest energy efficiency and reducing waste.”

That is no small task, considering the requirements of a structure designed to optimize all aspects of laboratory operations for one of the nation’s largest reference laboratories.

To ensure that laboratories can operate 24 hours a day, seven days a week without disruption, the electrical and heating, ventilation, and air conditioning (HVAC) systems must be redundant to guarantee backups if a system goes down, said Curtis Hansen, ARUP director of facilities. The building has to have higher ceilings to accommodate automation tracks and structural safety features. It also has to be constructed with increased rigidity compared with other buildings to minimize vibrations that can interrupt or harm sensitive instruments.

“Each of these features adds to construction costs, but will save ARUP money in the long run,” he said.

Chad Turner, ARUP design and construction manager, used the HVAC system as an example. He, Hansen, and their team explored all options, including solar, before choosing a sophisticated recovery system that added $2 million to the building’s cost, but will save ARUP an estimated $300,000 per year in heating and cooling costs.

In providing proper ventilation for the new building, which is critical to maintaining specimen quality and employee safety, the system will pull hot and cool air out as it is cycling outside air into the building and then reuse the hot or cool air to achieve the savings Turner and his team cite. The structure will achieve further energy savings through the installation of the highest-efficiency windows and insulation. “The building will be absolutely airtight,” Turner said.

Beyond the building itself and its infrastructure, planners included other features to reduce waste. They expanded the dock area to provide more room for the extensive materials recycling ARUP already does.

In the new cafeteria, no paper or plastic will be used to serve food; an industrial dishwasher already has been installed that is capable of washing and sterilizing dishes for 2,000 meals per day.

Transportation also has been addressed. Employees who bicycle to work will be able to store bikes in a new secure storage area. There will be showers adjacent to a large locker room on the building’s ground floor where all laboratory employees will begin their shifts.

He added that the same water-efficient xeriscaping ARUP has outside the existing main facility will be added around the new building.

“Overall, our new building enhances the efforts ARUP already makes as it strives to be a green company,” he said.

The new building’s construction is on schedule, with completion planned for late January or early February. Once it is completed, move-in will take place in phases. The building will be fully operational by mid-2021.

This article is part of a series introducing ARUP’s new building, which will open in early 2020.