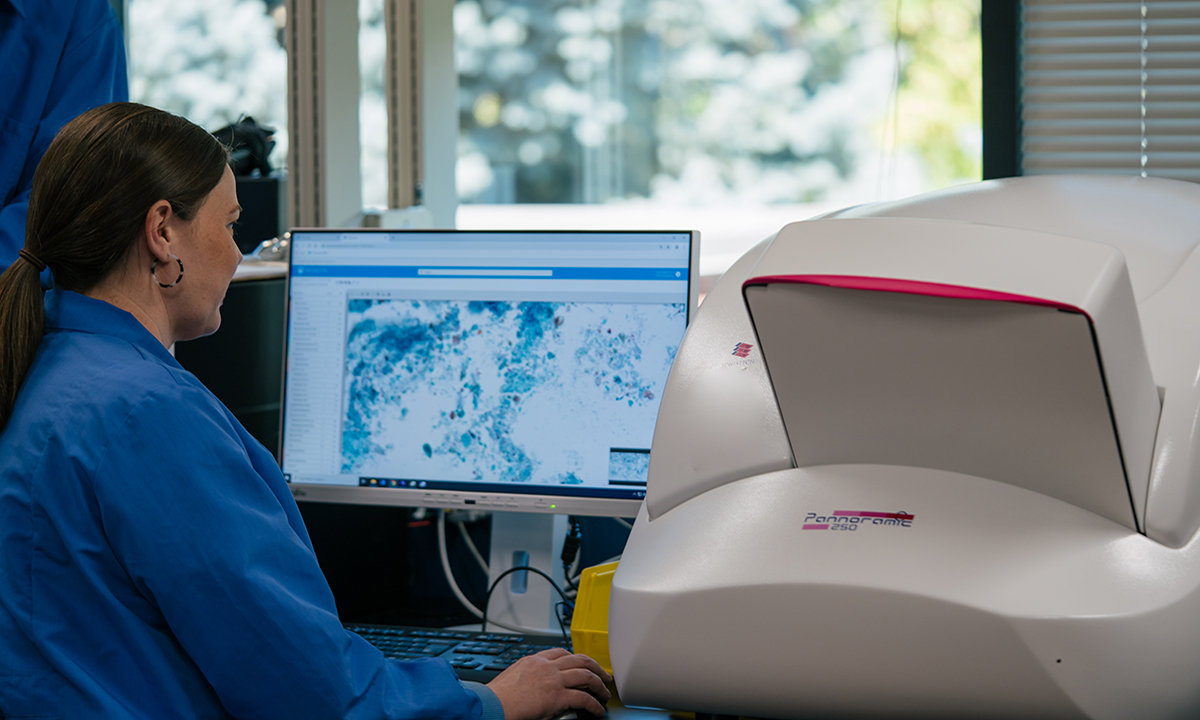 ARUP Laboratories and technology company Techcyte published a study in the Journal of Clinical Microbiology on their AI-augmented ova-and-parasite detection tool.

“This publication is really the first in the world to show the application of AI [artificial intelligence] to the trichrome stain,” explains ARUP medical director Marc Couturier, PhD, who oversees parasitology testing at ARUP. “It brings technology and excitement back into parasitology, which hasn’t seen as much investment in automation and new technologies compared to other labs.”

The AI-augmented tool uses a convolutional neural network to identify ova and parasites in scanned images of stool samples. Training the network to recognize parasites from an image requires inputting massive amounts of data, a process that began over three years ago.

“It is extremely satisfying to see the technology make a difference in the life of medical technologists and the patients they are helping,” said Techcyte’s John Walker, who managed the project. Techcyte is a leading developer of artificial intelligence-based image analysis solutions for the diagnostics industry.

Since implementing the tool clinically in August 2019, the AI-augmentation has demonstrated increased sensitivity, which ultimately improves the quality of patient care. And by eliminating much of the manual work involved, the tool has decreased turnaround times and reduced the burden on lab personnel.

“We are really pleased with just how dynamic the results have been, and it’s only getting better with the more data we collect,” said Couturier. “With 98.88% agreement with conventional microscopy and a 5-fold increase in the limit of detection over microscopy, this study shows the potential of AI-augmented tests to revolutionize diagnostic testing.”

The increased sensitivity means more accurate results for patients. In particular, the tool excels at identifying rare positives that may be easy to overlook when analyzing by microscopy. As an example, the tool was able to detect a handful of parasites that a technologist could easily miss on a manual examination. In fact, the technologist had a difficult time finding these organisms on manual review of the slide after the tool detected them, but eventually confirmed their presence. More specific identification may help improve treatment for the patients that may have otherwise not received a diagnosis or incomplete detection of all the organisms present in the specimen.

“The improved sensitivity means improved patient care,” said Parasitology Lab supervisor Kristin Case. “To be part of this change has been monumental and exciting.”

A Much-Needed Update to Traditional Methods

Since the development of the ova-and-parasite assay, processes in this field have largely remained static, relying on decades-old methodology — a time-consuming, manual process that requires the expert eye of an experienced medical technologist.

Although parasite infections may have declined in the United States over the last few decades, testing volumes remain high. This disproportionate volume of testing compared to positive cases presents a series of challenges. With relatively few positive cases, it is difficult to train medical technologists to an adequate level of competency. Further, carefully analyzing each specimen, the majority of which are negative, takes massive amounts of time, leading to fatigue, burnout, and repetitive stress injuries.

“With only a 3 to 5% positivity rate, sorting through the large percentage of negative slides places a huge burden on medical technologists,” explains Lisa Skodack-Jones, senior product manager at ARUP.

The new AI-augmented tool significantly reduces the manual labor involved in this process by eliminating negative samples. This allows medical professionals to focus their efforts on confirming the results for positive samples. Dr. Couturier further elaborates on the role of AI in a clinical laboratory, “The idea isn’t that this would replace the human; instead, the AI makes the human faster and makes their processes easier and more accurate.”

For a high-volume lab that processes approximately 5,000–6,000 specimens every month, implementing AI for the most time-consuming and laborious aspects of the process makes a crucial difference to those who work in the lab.

“It is important to understand that AI technology does not diminish the need for parasitology expertise in the diagnostic lab. Labs will still need good parasitologists for interpreting results and directing future challenges,” explained ARUP scientist Blaine Mathison, who is recognized worldwide for his expertise in parasitology.

Although the tool was clinically implemented less than a year ago, those involved in the project have already started working towards future applications. One aspect of future progress is to improve and update the tool in its current application. As the AI is continually trained with more data, it will only get better at recognizing and classifying parasites in specimens.

But that’s only the beginning. Several more projects are underway at ARUP to explore other possibilities for both infectious and noninfectious specialties.

“This development is a major accomplishment, but it isn’t an ending point. Digital pathology and AI are powerful tools that can be applied to many lab areas to help improve processes,” said Jessica Kohan, part of ARUP’s R&D team. “We are going to continue to innovate, always pushing forward to improve patient care.”