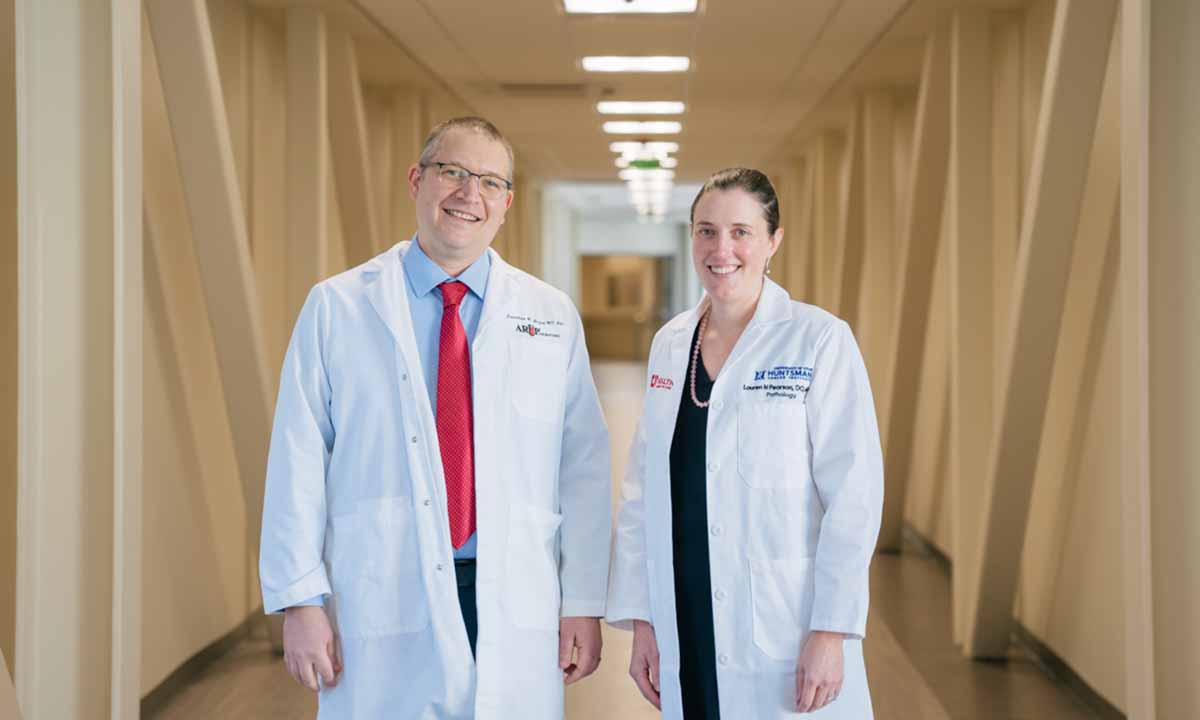 ARUP Chief Medical Officer Jonathan Genzen, MD, PhD (left), and Lauren Pearson, DO, MPH, chief medical officer of ARUP at University of Utah Health, are coauthors of a newly published JAMA Research Letter that summarizes results of a survey of clinical labs to evaluate adoption of a new equation to assess kidney function based on creatinine in patient serum. The new equation eliminates adjustment factors for race.

ARUP Laboratories is among a growing number of clinical laboratories that have adopted a new equation to assess kidney function based on creatinine in patient serum. The new equation eliminates adjustment factors for race and is being adopted as part of an industrywide effort to address a systemic bias that may have affected the diagnosis and treatment of kidney disease in individuals who identify as Black.

Working through CAP’s Chemistry and Instrumentation committees, the coauthors sent a survey to clinical labs in the United States in March 2022 to assess their awareness and adoption of the new CKD-EPI equation, which was released in September 2021.

As reported in the JAMA letter, they found that 76.9% of survey respondents were aware of the new equation. More than 30% said they had already adopted the new creatinine equation, and another 32% said they intended to adopt it by the end of 2022. University of Utah Health Clinical Laboratories and ARUP adopted the new creatinine equation in August.

“Within the first six months after publication, about one-third of U.S. labs surveyed had already adopted the creatinine equation,” Genzen said. “This is very rapid progress for adoption of new laboratory processes in healthcare, which often requires resources to support information technology, laboratory information system, and electronic health record validations. We also need to educate clinicians on correct interpretation.”

“This is just one piece of an important effort to eliminate inequality in the healthcare environment, and one in which laboratory medicine is leading the way,” Pearson said. “It sets an important precedent that, as laboratorians, we are committed to healthcare equity for our patients.”

Fewer labs—3.4%—had adopted a second revised equation for combined creatinine-cystatin C at the time of the survey. Another 8% responded that they planned to adopt it, while 32% said they did not plan to adopt the second equation. Respondents cited limited cystatin C testing options, additional cost of testing, and limited staffing resources as reasons for not adopting the creatinine-cystatin C equation.

Genzen said the CAP Chemistry and Instrumentation committees will repeat the survey in 2023. “We will continue to monitor progress and want to maintain awareness of this important initiative,” he said.