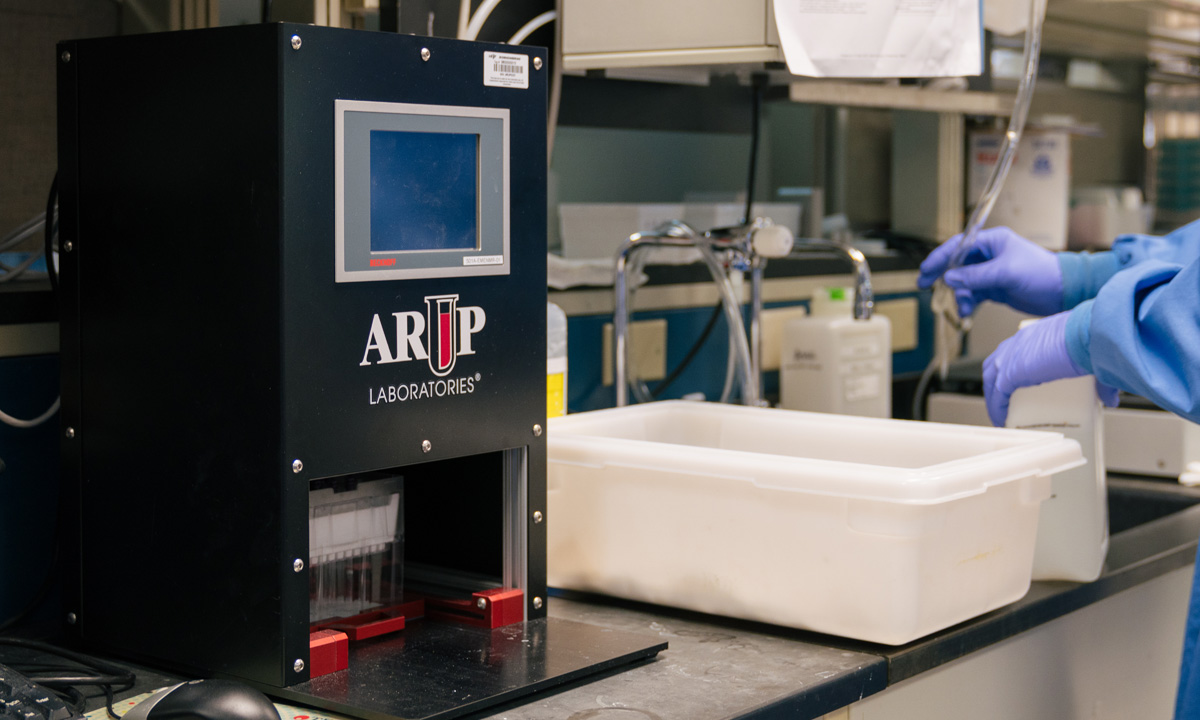 A new machine/robot called the Data Matrix Scanner is going to automate a lab’s procedures to test for cholesterol particles at high volume and without the messy turns and pitches of human error. This is no ordinary solution—ARUP Laboratories needed a unique fix to move a test in-house, photograph in one shot 96 test tubes on a tray with their accompanying tiny barcodes, and process 3,000 test tubes a month while tracking the number and ID for each. So lab supervisors and in-house engineers worked out their needs and had it built.

The machine is speeding things up. Working by hand, finishing 93–96 specimens per tray took two to three hours for Thomas Jung, lead medical technologist at ARUP. “This machine is very exciting – we decided how to bring a lab in-house and our engineers took those technical needs and designed a solution. It’s going to streamline our work,” says Jung, who worked with technical supervisor Theresa Kunzler (also in the Electro/Manual Endo Laboratory) and in-house engineers to plan Data Matrix.

ARUP Laboratories needed a unique fix to move a test in-house, photograph in one shot 96 test tubes on a tray with their accompanying tiny barcodes, and process 3,000 test tubes a month while tracking the number and ID for each.

A few obstacles lay in the way. Technicians wanted a machine to capture images of multiple 5mm-wide codes, record the data in software, and keep it for later reconciliation at the end of several steps. While engineering teams at ARUP had much experience in building automated instruments that could scan barcodes, “we recognized that it would be a challenge” to scan 96 two-dimensional (2D) codes in a rack at once, said Joseph Seegmiller, mechanical engineer of Automation Projects at ARUP, who worked with Christopher Semrow, supervising automation engineer, and Darby Nelson, controls engineer, to design and automate the project.

First things first, the engineers used a simple barcode camera to test whether a camera could recognize the 2D codes. When this worked, the team asked the camera’s manufacturer if their equipment could read 96 codes in one picture. The manufacturer had a system that would do this—as long as users set up correct camera settings and sufficient lighting for the codes, says Seegmiller.

Ultimately, the system includes a camera, LED light bars, and a miniature computer that allows the lab to scan codes and see results. All of that is enclosed in an instrument that was designed, built, and tested by the automation team at ARUP, Seegmiller says.

The Data Matrix Scanner and its accompanying instrument will debut in early summer for a cholesterol-particle test called LipoFit. And what is the point of such testing for cholesterol? Basically, low-density lipoprotein (LDL) particles, or “bad” cholesterol, can convey cholesterol onto cells in the artery wall. Sometimes smaller LDL particles more ably slip through openings between cells lining the arteries. This can trigger a heart attack or stroke. Particle testing is an advanced form of cholesterol testing. It is sometimes recommended (such as by the National Lipid Association) for people who have family history of heart disease at early ages or other risk factors.

Now such tests will speed along at ARUP. “We’re happy about this solution,” says Kunzler. “It will make our work so much easier.”