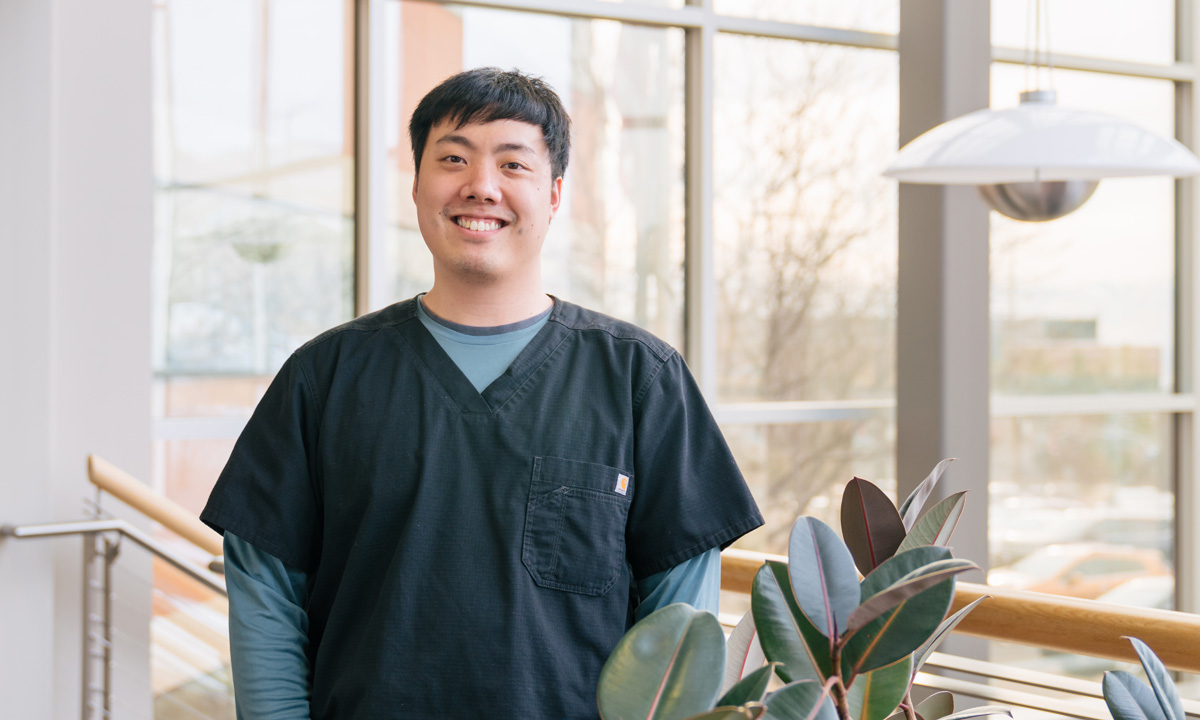 Learning his way around performing assays, ARUP technologist Charlie Thai thought, “I want to do this my whole life."

“It’s kind of sad that when I was in college studying biology, which was conceptual and broad and difficult to find my way into, I didn’t realize that MLS (medical laboratory science) was this much fun,” says Charlie Thai, a technologist in Transfusion Services at ARUP Laboratories.

Had anyone told him, he says he would have pursued it further.

Thai realized he wanted to know more almost immediately after starting work at ARUP in 2013 as a genetics technologist-in-training. Learning his way around performing assays, he thought, “I want to do this my whole life,” he says. Once he heard from a colleague about her credentials as a medical technologist, he realized there could be a thrilling and specific world of training ahead—and he checked in with the company's Institute for Learning (IFL) to learn about programs.

Thai is one of scores of ARUP employees each year who seek further training—often citing interest in higher pay, more interesting work, or both, says ARUP’s student education coordinator, Karen McRae. Those employees are not alone seeking to liven things up in the workplace. A 2016 study by online training portal, Udemy, found that 46 percent of employees note limited opportunities to learn new skills as the top reason they are bored in their current roles and looking for change.

“I thought the MLS program was the greatest thing ever; I was thrilled that I could actually apply my learning in life.”


At ARUP, employees with plans to switch roles usually talk first with a division representative from IFL, or McRae. Many pursue MLS programs, which tend to last 3–5 years. Employees who sign a work agreement with ARUP can be reimbursed 100 percent for MLS training and some other forms of training. ARUP departments also often help arrange work schedules to allow for training, and IFL helps MLS trainees set up the course-required laboratory-training rotations to take place at ARUP. “Receiving that extra boost was really helpful,” says Tiffany Bradshaw, ARUP clinical product manager for Chemistry and Toxicology. “Most people in my university study program at the time had to go out and find hospitals and clinics that would allow them to do rotations. ARUP set it all up for me.”

Working with trainees also benefits ARUP, helping to beef up the inflow of trained laboratory technologists—“the bread and butter of our company,” McRae notes.

Training also helps address a well-known problem in the lab industry: the constant need for additional trained technologists. Nationwide, the number of laboratory training programs fell from 720 to 608 since 1990, a decrease of greater than 15 percent, according to 2015 figures from the American Association of Clinical Chemistry (AACC). In 2015, AACC also noted that some states, including Nevada, Vermont, and Wyoming, have only one laboratory educational program accredited by the National Accrediting Agency for Clinical Laboratory Science (NAACLS), so they have to recruit from out of state. Working to solve that problem closer to home, McRae says that at any given time, she helps support around 40 Weber State University MLS students and usually 40 or so University of Utah MLS students doing laboratory work-experience rotations at ARUP.

Bradshaw had a bachelor’s in biology, too, and a categorical certification in chemistry. Like Thai, she wanted deeper knowledge in medical laboratory science, so she went to the IFL and asked for information. In the end, she chose the Weber State program because its online flexibility allowed her to continue managing a lab during the day.

After finishing her MLS certification, Bradshaw moved to supervise an immunology lab at ARUP. While her existing categorical in chemistry would have allowed her to supervise in certain labs, her new MLS certification was required to supervise in other areas at ARUP, such as Infectious Diseases—ultimately broadening her possibilities in the laboratory industry. Training also opens an outside world of positions, such as those in hospital laboratories, Bradshaw points out. Since 2016, she has been an ARUP clinical product manager, helping to communicate to outsiders the types of tests developed and offered in the laboratory. “I think my knowledge of the company’s inner workings helps me a lot—that comes from my time supervising in the labs,” she says. “My MLS certification helped me to have that experience.”

Thai remains in his first job at ARUP, but notes that he knows so much more now: “After a year in the MLS program, the world opened up.” He learned complicated analyses, such as how to interpret blood smears, differentiate white blood cells, and perform refined tests. “I thought the MLS program was the greatest thing ever, and I was thrilled that I could actually apply my learning in life.”

McRae is glad to be around all this learning. An education coordinator since 2008, she likes helping employees get beyond work as day-to-day existence, she says. “Many employees come through with families, looking for ways to make ends meet. I’m trying to make that easier. As a medical laboratory scientist, maybe you won’t become super-wealthy, but you’ll be able to comfortably support yourself and a family. I feel that we make a difference in our employees’ lives every day.”

"Lab Jobs: A Talk about Cytogenetics"