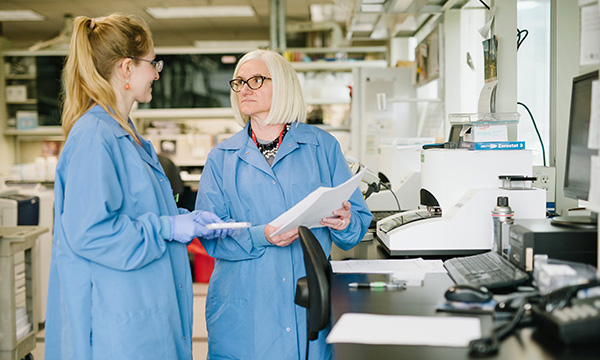 The first baby of 2017 in Utah was a twin. Around the country, other infants entered the world at midnight or soon after—eyes squeezed shut, damp, and full of life. In every state, those new babies received a heel prick to test their blood and metabolism for abnormalities. In Utah, the new twin was screened (like all babies in the state) after 24 hours of life, and again two weeks later for the well-baby exam.

That routine is all about early detection: Find out if there are abnormalities, then treat early. After all, the age at which a condition is treated can make all the difference for a healthy life.

Why wait 24 hours to screen? It’s helpful to hold off until after the child has processed food for the first time and experienced metabolism. “The first hour and day of life are primarily about breastfeeding and bonding, so we don’t test right away—but we also don’t want to get false positives by testing too early. There are some conditions that won’t show up until the baby is adequately fed,” explains Julie Shakib, DO, assistant professor of pediatrics and director of Newborn Nursery, University of Utah.

“I think that everyone is thinking, ‘how can we improve the quality of life for these children with testing?' To me, anything that you can screen for and for which there is an effective treatment, should be added [to newborn screening].”


The Utah Department of Health (UDOH) conducts screens for 39 primary conditions (44 conditions in total). Thirty-four of them are part of the national Recommended Uniform Screening Panel (RUSP) set by the secretary of the U.S. Department of Health and Human Services and the Secretary’s Advisory Committee on Heritable Disorders in Newborns and Children (SACHDNC). Because ARUP is based in Salt Lake City, it partners with the UDOH conducting tests for 30 of Utah’s 39 screened conditions.

This means that a baby born in Utah is screened for conditions that some other states do not include in their screenings, such as SCID (severe combined immune deficiency; the condition that David, the Boy in the Bubble, had) and GAMT-deficiency (guanidinoacetate methyltransferase deficiency, which affects the brain and muscles if not treated early). “That’s an advantage here—in particular, it’s fairly special that Utah screens for GAMT-deficiency,” notes Andy Rohrwasser, PhD, deputy director, Newborn Screening Lab, UDOH.

The Utah twin also had the benefit of those two screenings—at 24 hours and two weeks later—whereas some states offer only one screen. “There are some disorders that we catch on the first screen, which might not be as visible in a two-week-old baby. On the other hand, in other cases some signs are less elevated near birthbut rise above our cut-off mark at the time of the second screen,” explains Kim Hart, UDOH’s newborn screening program manager.

“We live in a world of diversity—so, if there is already such diversity from a genetic standpoint, testing for diversity should be a driving force in adding screens for many conditions,” says Rohrwasser. 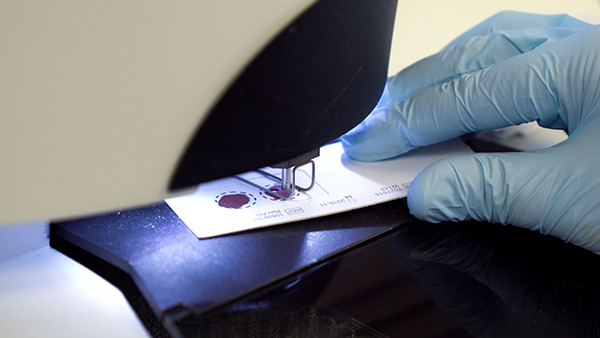 Each baby receives a heel prick at birth to test their blood and metabolism for abnormalities.

There’s general agreement that medical practitioners would like to intercept any conditions early. “I think that everyone is thinking, ‘How can we improve the quality of life of these children with testing?'” says Marzia Pasquali, PhD, Medical Director, Biochemical Genetics and Newborn Screening section chief, Biochemical Genetics, ARUP. “To me, anything that you can screen for and for which there is an effective treatment, should be added.” This sentiment is especially relevant to her current efforts in trying to get GAMT-deficiency included in the RUSP.

Dr. Pasquali’s work is integral. “She is an amazing clinical scientist and coworker, very rigorous—and at the same time, very passionate,” says Rohrwasser. “ARUP is really at the forefront of clinical research.”

Utah’s newborn babies have the advantage of a quick path for further treatment, if needed. If a baby’s screen shows abnormalities, UDOH and ARUP’s close connections with clinicians at University of Utah are helpful. Some states are more distant from their subspecialists, slowing down the care these babies need.

“The driving force of a newborn screening program is to get these babies into clinic as soon as possible and treated, “ says Rohrwasser. “Many areas think that identifying the problem in the newborn is the finished action, but doing that is only the beginning of the picture.”

For this twin and many others, it’s the beginning of a brand new life. To read more about newborn screens at ARUP, go here.

"One Has It and One Doesn't: Changing the Trajectory of a Rare Disease"

"Detecting Fentanyl Exposure in a Newborn Via the Umbilical Cord"