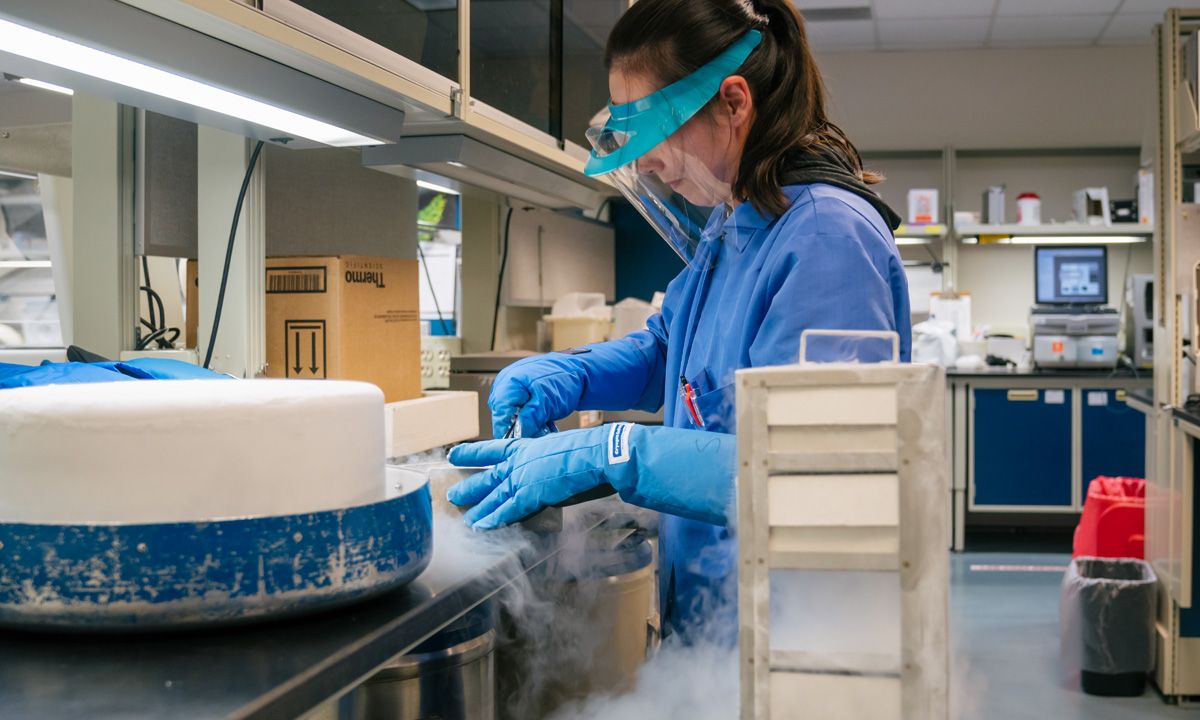 Lisa Meek, a medical technologist in ARUP’s Immunohematology Reference Laboratory, retrieves a frozen red blood cell (it looks like a ruby bead) from one of the lab’s five tanks that contain over 3,000 blood cells identified as rare. Meek and her fellow laboratorians will use these to test patient blood specimens sent to their lab to determine blood type and what kind of donor matches are needed.

At first glance, everyone’s blood looks the same. But a closer, deeper analysis reveals that each person’s blood can differ dramatically.

We all share the four main components of blood—red and white blood cells, platelets and plasma. Substances called antigens coat our red blood cells. Differences in these antigens are what makes one person’s blood different from someone else’s. So far, scientists have identified more than 600 of these miniscule markers (including A and B antigens), which can be unique to specific racial and ethnic groups. Antibodies, or proteins in the plasma produced in response to specific antigens, play a key role in blood compatibility as well.

“There are different levels of rare. Some folks are so rare that we encourage them to donate in case they’ll need the blood in the future because we won’t likely be able to get matches right away,” says Lance Bandley, community relations supervisor, ARUP Blood Services. “They may be donating just to save their own life.” Rare blood donations are stored in a customized freezer where they can stay for up to 10 years. Typically, donated blood must be used within 35 days.

“Red blood cells have hundreds of antigens. We focus on about 20 that are the most impactful antigens. Most people who have rare blood don’t know it.”


While requests for rare blood are infrequent, when it is needed, there may be no alternatives. When ARUP Blood Services receives a request, it can plug the antigen codes into a software program that searches a database for matches. A recent request for a rare blood type resulted in only two possible donors out of 220,000. Both donors were unavailable.

More often, the blood bank is trying to match the blood needs of cancer patients. This is considered a rare blood need. Many are patients who have received so many platelet transfusions that their bodies no longer respond to a variety of platelets. They need an exact Human Leukocyte Antigen (HLA) match, and there are myriad combinations of HLA molecules. It is important for the donor and the recipient to share a common HLA type so the antibodies in the recipient’s blood will not attack the new cells as being foreign.

Recently, a patient at Huntsman Cancer Institute had only four possible donor matches. One had moved out of state. The other needed special testing before donating. The third could no longer donate. “That left us with one person for this patient,” says Bandley. In such situations, the blood bank will also contact blood centers out of state to look for matches.

People from different ethnic groups have different rare blood needs. African Americans and people from French Polynesia, Southeast Asia, and the Middle East are more likely to have rare blood that is difficult to find in the United States. This is why finding a match has been so difficult for Zainab Mughal, a toddler diagnosed with the cancer neuroblastoma. She is missing the Indian-B antigen, a molecule found on the surface of most people’s red blood cells, and she also has an antibody to it. So far, only four donors worldwide have been identified.

Only people of Indian, Iranian or Pakistani descent are likely to be missing that particular antigen. In other words, to be a potential match for Zainab, a donor’s birth parents must be of one of those ethnicities. Making things more complicated, fewer than four percent of people in those ethnic groups are missing the antigen, according to OneBlood, the organization that helped Zainab’s family share their story.

Figuring out someone’s blood requirements can sometimes be akin to unraveling a mystery. The laboratorians in the ARUP Immunohematology Reference Laboratory (IRL) understand the difficulty. These blood detectives spend their days determining the more complex blood types of patients. “Our role is to find the answer and identify red blood cell antibodies. We know the antibodies are there, we just need to identify them,” says Rebecca Whitney, MLS(ASCP)SBB, technical supervisor.

When you are exposed to blood that is different than your own, usually through transfusion or pregnancy, your immune system can make antibodies that attack the antigens that are foreign or not expressed on your cells. When these antibodies attack the red blood cells from a donor, the donor red blood cells may be destroyed.

Not unlike an experimental process, teasing out the answers requires a series of steps, each one based on the reaction before it. Using tools, reagents, patient data, knowledge and experience, this team investigates the recipient and the donor’s blood type to ensure a match.

“It’s a process and it’s never the same,” says Whitney, pointing out that even their most experienced team members can get stumped. “There’s a lot of collaboration in our lab to figure out what the next step should be,” says Whitney, who compares her work to solving puzzles. IRL laboratorians are certified Medical Laboratory Scientists who specialize in blood bank testing.

A person can have the most common blood type of O+ and still require rare blood because of the other antigens that are present or absent on their cells and the antibodies their immune system has made. “I might have a patient who made seven different antibodies, all very common ones,” explains Whitney. “Finding a donor with that particular combination can get tricky—that’s what makes it rare.”

Why Are So Many People Banned from Donating Blood as Demand Climbs?

Another Way to Show Love This Valentine’s Day