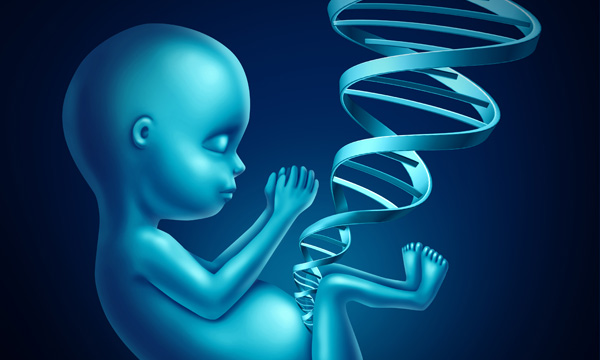 During the second trimester of pregnancy, most parents look forward to an ultrasound to get an early peek at their baby and find out whether they’ll be having a son or daughter. Although the parents are expecting positive feedback on how their pregnancy is progressing, sometimes the sonographer notices that the fetal long bones and ribs are significantly shorter than expected or the fetal head is larger; other concerns may arise as well.

What is Lethal Skeletal Dysplasia? We'll Talk About That

The identification of skeletal dysplasia symptoms creates a great worry for expectant parents, especially when they learn that some skeletal dysplasias are not compatible with long-term survival, says Chris Miller, a genetic counselor at ARUP Laboratories. More than 50 different skeletal dysplasias may present in the prenatal period. Prenatally, the only way to make a conclusive diagnosis is to identify the causative gene variant. Determining a diagnosis is necessary for accurate counseling regarding pregnancy prognosis and recurrence risk in future offspring.  Prenatal diagnosis commonly involves obtaining a small amount of amniotic fluid to analyze DNA in the fetal skin cells that have been sloughed off.  ARUP developed a 39 gene skeletal dysplasia panel targeted toward skeletal conditions that often manifest in the prenatal period to aid in the diagnosis and prognosis of such affected pregnancies.

“While healthcare providers may venture educated guesses of the specific diagnosis based on the ultrasound findings, the genetic test developed by ARUP Laboratories often provides parents with some definitive answers,” says Miller. Parents want to know if their baby has a lethal condition or not. Should they continue with the pregnancy, even if the baby will not survive? What are the chances of it recurring in a future pregnancy? A diagnosis helps parents manage post-birth plans.

The majority of babies born with a skeletal dysplasia have no family history of the disorder, even though it is caused by mutations in particular genes. Some skeletal dysplasias are commonly caused by a new mutation, not present in the parents, which occurred in the fetus in early pregnancy, while others are caused by the baby  inheriting two copies of the same defective gene, one from each parent. In those cases, the parents are silent carriers, and it is only when the baby inherits a double dose of the same mutated gene that the baby is affected with the condition.

“We actually found that the cause was the result of a mutated gene that both parents carried. There is a one in four chance that it could happen in each of this couple’s subsequent pregnancies.”


This was the case recently involving a couple who gave birth to a stillborn baby and wanted to know why. “We actually found that the cause was the result of a mutated gene that both parents carried,” says Miller. “There is a one in four chance that it could happen in each of this couple’s subsequent pregnancies.” The couple should see a genetic counselor to understand their risks and understand all their options. Since they know the specific causative mutations, they could undergo preimplantation genetic diagnosis prior to future pregnancies, receive a prenatal diagnosis, or choose to adopt.

Increasing demand for providing an accurate diagnosis for pregnancies affected with a skeletal dysplasia prompted ARUP’s genetic experts to develop the skeletal dysplasia panel last year. “We focused on this group of abnormalities and the genes involved for skeletal dysplasias that can be identified by ultrasound in a fetus,” says Elaine Lyon, PhD, medical director of Molecular Genetics/Genomics. “The less serious types don’t show up on a prenatal ultrasound because symptoms present later in childhood.”

What’s Unique About This Test?

Prior to this panel, ARUP tested for one skeletal dysplasia disorder after another using individual tests, which is expensive and time consuming. Traditionally, this was how laboratories offered testing. “Because prenatally you often miss clues that would lead you to test for a specific skeletal dysplasia, the old approach was frustrating,” explains Miller. Testing for the most common conditions could still leave physicians and parents without a diagnosis. This meant anxious parents had to wait until delivery to get a diagnosis from X-rays,  physical exam, autopsy (if the baby died), and a medical genetics consult.

“We have a pretty high rate of picking up causative mutations,” says Lyon, who is also a professor of pathology at the University of Utah School of Medicine. She explains that different mutations in the same gene can cause different types of skeletal dysplasias; for example, one gene mutation can cause six different abnormalities depending on where the mutation is located on that gene. In some cases, the same gene can carry a mutation that causes lethal dysplasia and a mutation that allows for a survivable form of skeletal dysplasia. “It’s the same gene, just with different variants resulting in a spectrum of severities,” says Lyon.

Some other labs performing skeletal dysplasia panels examine only common mutations previously reported in a gene. Lyon and her team are actually sequencing the entire coding region of 39 genes, which is the number of genes currently known to be associated with skeletal dysplasias presenting early in life.

Miller, who helps healthcare providers understand results, explains that sequencing is like reading every letter in an entire book. It will detect common “misspellings” and other “typographical errors” that have never been reported before. The panel also involves deletion/duplication testing to detect entire missing “chapters” in a gene. “Missing chapters cannot be detected by sequencing, so deletion/ duplication testing is also important to make sure you have not missed a specific mutation,” says Miller.

Lyon adds, “This panel is offering so much more breadth and depth than other, individual gene tests.”

“Focusing on the Needle or the Haystack: General versus Specific Genetic Testing Strategies”