An estimated 30 million Americans have been diagnosed with one of 7,000 known rare diseases, according to the National Institutes of Health (NIH). So while each disease may be rare, the total number of people living with a rare disease is large. Half are children.

Before a diagnosis, patients and their families face frustration as they search for answers from specialists, scientists, and the internet. Diagnosis can be elusive and the exact causes of many rare diseases are still unknown. “It’s difficult feeling so alone, so unGoogleable,” Cristina Might said. Doctors eventually diagnosed her son with a disorder stemming from a mutation in the NGLY1 gene.

While advances in genetic testing have allowed for more diagnoses of rare conditions, only about 5 percent of these conditions have treatments according to the website, From Hope to Cures, spearheaded by the Pharmaceutical Research and Manufacturers of America (PhRMA).

Evolution in the Laboratory

ARUP Laboratories is at the forefront of testing for rare and difficult-to-identify diseases. “It’s our expertise and what we are known for, especially for syndromes that are one in a million,” says Hunter Best, PhD, medical director of Molecular Genetics and Genomics and an associate professor of pathology at the University of Utah (U of U) Health.

The development of new testing and related technologies, bolstered by ARUP’s academic medical affiliation and its Institute for Clinical and Experimental Pathology, is allowing ARUP to expand its menu of tests for rare or difficult-to-diagnose diseases. Currently, ARUP offers more than 3,000 laboratory tests, hundreds of which help diagnose rare genetic disorders—for example, retinitis pigmentosa or Charcot-Marie-Tooth disease.

Whole genome and whole exome testing were watershed breakthroughs for genetic testing; whole genome testing refers to massively parallel sequencing of the entire three-billion-plus base pairs of the human genome, while whole exome testing specifically looks at the approximately three million base pairs located in protein-coding regions. Both of these methods, using next generation sequencing technology, are actively being used in the clinical laboratory to identify disease-causing variants or changes.

“Theoretically, we could test for any genetic disorder that has ever been described,” says Best. “For rare diseases, the challenge from a lab perspective is finding enough patients who have already tested positive for the syndrome to validate testing.”

“It’s extraordinary what we can test for now,” says Elaine Lyon, PhD, medical director, Molecular Genetics and Genomics, who has been involved in ARUP’s rapid growth in genetic testing over the past 20 years. “We went from having only two molecular tests for inherited diseases when I started in 1997, to having exome testing and gene panels, with leading-edge technologies needed to keep up with what’s possible.

“So many of our rare disease tests are not high volume, but they are very important tests,” adds Lyon, who is also a professor of pathology at U of U Health. “Those patients still need an accurate diagnosis, and that diagnosis is extremely meaningful for that family, because in genetic testing, the results affect the whole family, not just the individual.” For family members, knowing they are carriers of a genetic disease can influence family-planning decisions.

Rare for Some, Not for Others 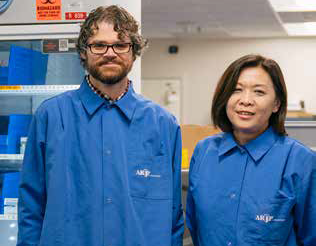 Most rare diseases are caused by genetic variants, although other factors can cause disease, too, says Rong Mao, MD, section chief of ARUP’s Molecular Genetics and Genomics. “Many times we don’t know what triggers it, which is the case with some rare autoimmune diseases. Sometimes doctors are left guessing.”

“In medicine, these ‘rare diseases’ are the hardest disorders to diagnose, usually sending patients on a diagnostic odyssey, sometimes for years. With our testing, we can help in the patient-care process by confirming the diagnosis and putting an end to that odyssey.”
Hunter Best, PhD, Medical Director, Molecular Genetics and Genomics

Rare pathogens can cause infections that affect just one or two people. It’s not until the infection spreads, as it did with the Zika virus, that it becomes easier to determine what is causing it.

Some genetic diseases are rare except among certain ethnicities—for example, sickle cell disease is more prevalent in African populations, and Tay-Sachs disease has a higher incidence in the Ashkenazi Jewish population.

“Ashkenazi Jewish people tend to marry within their own population, so the mutations tend to accumulate, increasing the likelihood of the disease being passed on to the next generation,” explains Mao, who is also a professor of pathology and co-director of the Clinical Molecular Genetics Program at U of U Health. ARUP’s Ashkenazi Jewish carrier-screening test screens for 16 conditions.

In 1983, the Orphan Drug Act defined a rare disease as a condition that affects fewer than 200,000 people. Its passage was an attempt to create financial incentives to motivate pharmaceutical companies to develop drugs for rare diseases, also known as “orphan diseases.” Previously, companies had not been interested in investing and developing treatments for conditions that affected so few people. Since the act was passed, the FDA has approved more than 500 orphan drugs.

The National Institutes of Health estimates that 50 percent of people affected by rare diseases are children—a third of whom will not live to celebrate their fifth birthday. An estimated one in three of the nearly 3,000 drugs with orphan designation are for children.