You can see the mother with breast cancer. The brother who got colon cancer. The neighbor whose heart suddenly stopped due to a heart arrhythmia.

What you cannot see is the gene variant, or mutation, associated with each of these diagnoses. For more than 50 years, University of Utah (U of U) Health geneticists have been at the forefront of discoveries about our genetic makeup and what happens when things go awry. They have identified genes and risk factors linked to more than 30 conditions.

Catalyzing these discoveries is the university’s Utah Genome Project, a large-scale genome sequencing and analysis initiative, in combination with the Utah Population Database (UPDB)—a treasure trove of genealogical data. The UPDB includes health and medical information from more than 10 million people in thousands of large pedigrees. It’s a holy grail for research, attracting faculty from around the world to the U of U.

The project supports genetic research on more than 50 diseases and involves investigators from nearly every department in the School of Medicine. It is also closely affiliated with the Penelope program, a collaboration between the U of U’s Department of Pediatrics and Primary Children’s Hospital dedicated to finding diagnoses for the undiagnosed. If a child is born with a suspected genetic condition, each family member’s genome is sequenced to fi gure out if the condition stems from a gene variant. “This allows for a diagnosis, and, in some cases, a treatment option,” says Lynn Jorde, PhD, executive director of the Utah Genome Project.

In 2009, geneticists at the U of U sequenced the genomes of an entire Utah family. It was the first time ever that an entire human family had this done, and it paved the way for the Utah Genome Project. The data contributed to the discovery of the genetic variants involved in Miller syndrome and primary ciliary dyskinesia. (See accompanying article. A Singular DNA Destiny)

In addition, by studying this family’s genes, scientists were able to estimate the human mutation rate, or how often mistakes occur across the entire genome. “We wanted to get an idea of how long it would take for genetic differences to arise,” explains Jorde. Since 2009, the genomes of many more families (involving more than 7,000 people) have been sequenced. 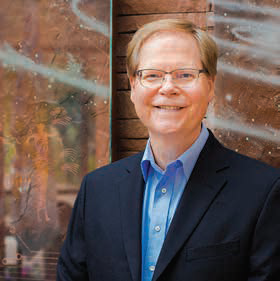 “As stewards of patient care, we must consider how to integrate more genetic testing, especially to screen populations at risk for specific diseases, and ask how we can economically accommodate it within a healthcare system,”
Karl Voelkerding, MD, Medical Director of Genomics and Bioinformatics (right)

“There are 3 billion base pairs in one person’s genome, so even sequencing one family gives you quite a bit of information,” says Jorde.

One of Jorde’s postdoctoral fellows, Chad Huff, PhD (now a faculty member at MD Anderson Cancer Center in Houston), came up with the algorithm that calculates the mutation rate. The calculation’s accuracy has stood the test of time.

The Utah Genome Project draws expertise from across the U of U, including from ARUP Laboratories, which collaborates with the project by helping to translate new genetic findings into diagnostic tests.