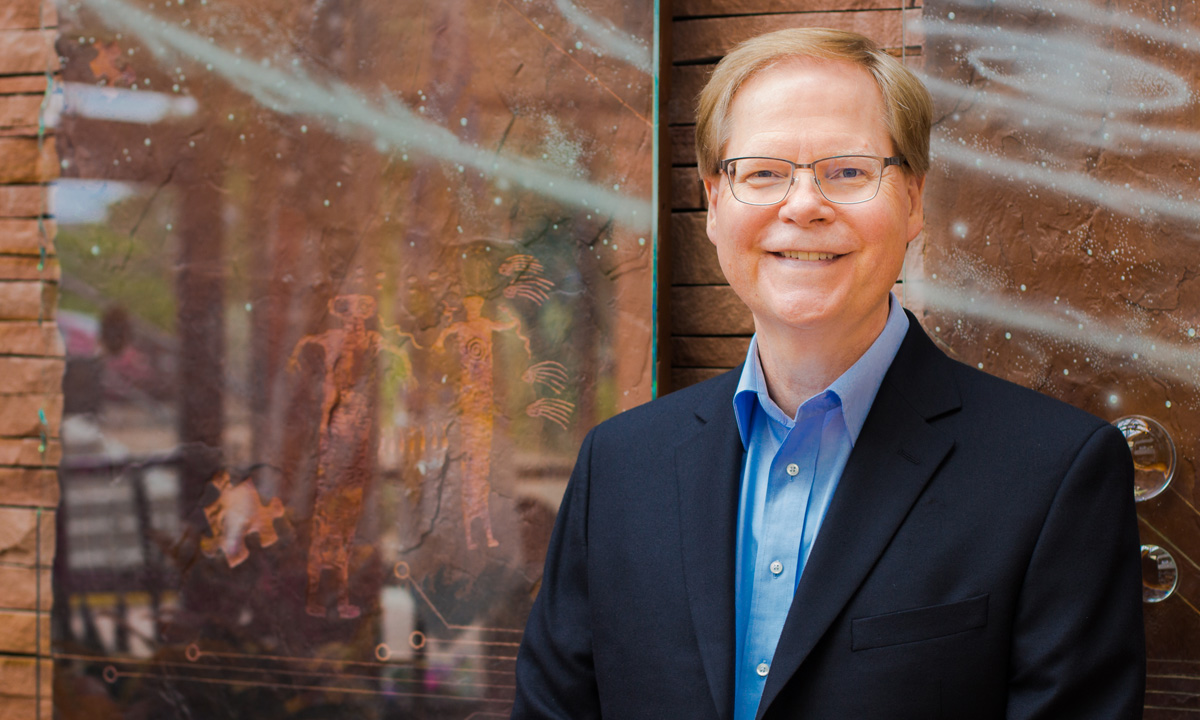 Karl Voelkerding, MD, FCAP, retired from his position as medical director of genomics and bioinformatics at ARUP on July 1, 2020.

Karl Voelkerding, MD, FCAP, once imagined practicing medicine as a primary care physician in a rural setting, just as his own doctor — one of many individuals who influenced his decision to pursue medicine — did. Instead, Voelkerding would become one the world’s leading experts in next generation sequencing (NGS), a technique used in genetic testing.

By the time he retired from ARUP on July 1, 2020, Voelkerding’s expertise had helped to define applications of NGS in laboratories globally. His contributions have helped molecular pathology to develop into the robust field it is now.

But Voelkerding’s path to becoming an NGS expert wasn’t very direct. When he talks about his childhood in a small town in Ohio, what comes across are the agricultural associations — baling hay, working with horses, planting crops — rather than early career ambitions. Voelkerding initially didn’t even plan to attend college, instead accepting a job in a lumberyard following high school. Eventually, on the advice of some friends and his father, Voelkerding enrolled at Ohio State University.

“It was a transformative experience, going from a rural school district to one of the largest campuses in the United States,” Voelkerding said. Ohio State has a student body of more than 50,000 students — a population that dwarfed his hometown of 1,500. “The world opened up for me.”

Later, in his second year of medical school at the University of Cincinnati College of Medicine, Voelkerding began working in a laboratory and learned that research was his passion.

“When I began to think seriously about what I wanted to do, there were two driving factors. I wanted to help others and I wanted a fair amount of independence as an individual to solve problems. Research answered both of those,” he said.

Voelkerding’s research has led to more than 90 publications throughout his career.

One of his most pivotal research breakthroughs identified two genetic disorders that manifest as a condition known as common variable immunodeficiency. Voelkerding, along with ARUP colleagues Harry Hill, MD, and Attila Kumanovics, MD, studied families whose members experienced similar symptoms: compromised immune systems that failed to produce sufficient antibodies to fight off infection, leading to recurring bouts of pneumonia and other infections. As the research unfolded, Voelkerding and his colleagues discovered that these individuals had a genetic defect in a gene that coded for IKAROS, a transcription factor that is instrumental in regulating immune B-cell development.

“It was extremely rewarding for me to take my molecular research and diagnostic training, then apply it to find the genetic basis for their disease. This research provides insight for individuals to better understand their condition,” Voelkerding said.

With the identification of these genetic disorders, laboratories can now test for the underlying cause of the condition, which creates the possibility for earlier intervention and treatment.

This research breakthrough was the culmination of decades of effort on the part of Voelkerding to become deeply knowledgeable about NGS, a technology that he first implemented at ARUP.

He joined ARUP in 2002 as one of two medical directors for the Advanced Technology Group, which was responsible for internal technology development and evaluation of external technologies that showed promise for their application in molecular pathology.

It was in this role that Voelkerding first began to evaluate NGS, which uses a massively parallel sequencing method that is currently capable of mapping an entire human genome in a single day — years faster than the previous Sanger method could. Recognizing the enormous potential of this technology to revolutionize genetic diagnostic testing, Voelkerding began the process for implementing NGS at ARUP.

“Karl’s leadership in helping NGS evolve into something that is a vital and reliable part of diagnostic medicine is really unparalleled,” said ARUP CEO Sherrie Perkins, MD, PhD, of the impact of Voelkerding’s efforts.

Voelkerding’s NGS expertise was such that by 2011, he had received a call from the College of American Pathologists (CAP) asking him to help the organization with its NGS efforts. As part of CAP, which inspects and accredits laboratories around the globe, Voelkerding has worked to enable laboratories worldwide to implement NGS testing for genetic conditions. Voelkerding convened and presided over a group of experts to develop guidelines for NGS implementation. The group also established accreditation regulations that are now used globally.

Voelkerding said he feels privileged to have joined the field of molecular pathology and genetic testing at a time when it was just beginning and to have witnessed its transformation into a robust field. His earliest experience of establishing a molecular diagnostic laboratory demonstrated just how rudimentary molecular pathology was.

Following his postdoctoral research fellowship, Voelkerding accepted an assistant professor position at the University of Wisconsin-Madison in 1990. While there, he began building a molecular diagnostic laboratory, essentially from scratch, while also fulfilling his clinical responsibilities in transfusion medicine.

“Molecular pathology was truly in its infancy at the time,” Voelkerding said. “Without the automated, sophisticated instruments of today, testing was largely performed manually. There was no curriculum, no hands-on practical training as part of educational degrees.”

This meant that Voelkerding personally had to train each medical technologist in the known molecular genetics techniques. Fortunately, his extensive experience in research had given him the necessary skills to train staff and build a functional lab. With Voelkerding’s proficiency in the various techniques, the lab was able to develop and validate diagnostic tests that it then performed for the University of Wisconsin’s hospital.

Despite the challenges of building a laboratory, Voelkerding remembers his time in Madison affectionately — not only as a time of great professional development, but also as the place where he met his wife.

The story of how they met perfectly characterizes Voelkerding’s capacity to create his own solutions. Instead of dating someone from his own social circle, most of whom were colleagues, Voelkerding took a more proactive approach. He placed an ad in the personals section of a local Madison newspaper. One of several respondents was his future wife, Mia.

“We went to a local café one winter night for tea and cookies, and that was how it started. Now, we have been together for over 25 years,” Voelkerding recalled.

Among his many fond memories of his time in Madison, Voelkerding particularly remembers the times he took his young children to play in local parks. Nowadays, he plays guitar with his grown son who lives in Salt Lake City, Voelkerding on acoustic and his son on an electric guitar. Although he enjoys all types of music, Voelkerding prefers the down-to-earth simplicity of folk and country music.

“There’s an element of folk and country music that is reflective and describes one’s experience of life,” Voelkerding said, adding that the same element comes out in his own songwriting, a hobby he plans to devote more of his time to during retirement.

The songs he writes often hark back to the experiences of his childhood and growing up in a small farming community, to which he hopes to return.

When reflecting on his time at ARUP, Voelkerding expressed deep respect for his colleagues.

“I was honored to work with such dedicated colleagues. To have confidence, day in and day out, that each person had performed their work well and that we provided accurate results for patients was a privilege,” he said.

Peter Jensen, MD, chairman of the University of Utah Department of Pathology and chairman of ARUP’s Board of Directors, said of Voelkerding’s legacy at ARUP, “He is an extraordinary leader at the national level and a recognized expert in NGS. He has given ARUP great visibility nationally.”