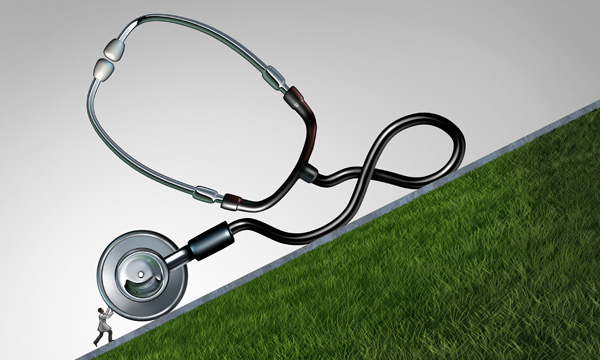 “I was a young woman in academics with a sick mind. I had been brought to my knees by madness and despair,” recalled Kay Redfield Jamison, PhD, professor of psychiatry, Johns Hopkins University School of Medicine, and co-director of the Mood Disorders Center.

“I looked inward and then around me, and I saw the reticence, the silence, around me on this topic; I saw how it made life more difficult than it needed to be,” Jamison told a healthcare audience at this year’s Association of American Medical Colleges (AAMC) Conference in Seattle. “It set people up for unnecessary suffering and death.”

A psychologist, Jamison addressed the issues of mental illness and well-being among medical students and doctors as suicide rates climb and burnout and depression interrupt careers in medicine.

“We’re training our students and residents on how to give care rather than need care.”


A 2009 study published in Academic Medicine found that 13.6 percent of medical students exhibited probable major depression and 6.6 percent reported suicidal ideation. The suicide rate among physicians is higher than among the general population.

The climate and culture is not one that encourages people to speak up about mental health concerns or seek out help. For these high achievers, there is pressure to appear “perfect,” to not appear weak or vulnerable, and to avoid being stigmatized by colleagues and risk their career opportunities.

Jamison speaks from experience; since her first psychotic break at 17, she has struggled and coped with manic depressive disorder. At one point, she had attempted suicide. In her best-selling memoir, Unquiet Mind, she educates and shifts the way readers think about moods and madness.

“Coming out” was a difficult decision. “I was afraid of being labeled as a mentally ill psychologist by colleagues instead of a psychologist with a manic depressive disorder,” said Jamison. She knew the objectivity of her work might be questioned or be perceived as “unfit.” With a laugh, she added, “It would provide live ammunition to anyone I had irritated over the years.”

She sought out advice from her department chair; should she share her “oddly intersecting worlds” as a researcher, clinician, and patient? His support was emphatic, stating that Johns Hopkins needed to be at the forefront in lessening this stigma.

Like in most medical institutions, it was well known that medical students and doctors go to great lengths to obscure any paper trail or history leading back to possible mental health issues. Doctors write their own prescriptions for anti-depressants. One recent study showed that physicians who had committed suicide were self-medicating incorrectly.

“The pain of mental illness—like the pain of cancer—does not discriminate.”


Ultimately, the need to continue improving the culture of medicine to keep people healthy, and a whole lot of courage, propelled Jamison forward. A Macarthur Fellow (2001), Jamison’s books and numerous journal articles have had a far-reaching impact on mental health treatment and public awareness of psychiatric disorders.

“The responses from colleagues were very human,” says Jamison, after writing openly about her mental illness in a series of Washington Post articles. Some were awkward, some sensitive, some not. A few were cruel. Colleagues that remained silent were the hardest response. “The silence was bone chilling.” She heard from many, most just simply saying, “thank you.” “There were no specialities not represented [among the responses],” recalled Jamison.

Medical school is a perfect storm for triggering mental health issues, with the immense sleep deprivation, stress, and the age of medical students coinciding with the age that  mental illness onset is most likely to occur (e.g., bipolar disorder usually occurs between the ages of 15 and 30). When asked, Jamison tells students that “It’s hard to get well and to stay well, but it can be done. That it is a bad illness to get but a good time to get it, as so much more is known now and science is moving fast.”

What Can Be Done?

She draws the audience into these students’ lives. “You feel so desperately alone when you have it.” There is a razor sharp difference between the hopelessness they feel and the high energy they see in their peers. There may be a lack of understanding from professors or advisors, a refusal to allow return from medical leave. “When I talk to those who have attempted suicide, very few have said they have talked about it with their parents.”

She emphasized that deans and others at a high administrative level need to be more educated on the issue and the seriousness of it. “It’s not about preaching to the choir (i.e., counselors) but to reach those running the schools.

“The culture around it needs to change. People need to be rewarded rather than penalized,” said Jamison, “after all, it is very treatable.” She emphasized the need to educate the incoming students, and continually throughout their medical training on the symptoms of depression, its prevalence, and where to find help. “We need a system that makes students see it as their responsibility to seek out help and treatment.”

A medical dean in the audience pointed out that students and residents are required to get a Hepatitis B shot and a flu shot, among other vaccines. “Why not make it mandatory to offer a self-screening tool for depression? Then it takes away the stigma—everyone has to do it—and it builds self-awareness and emphasizes the need to care for yourself.”