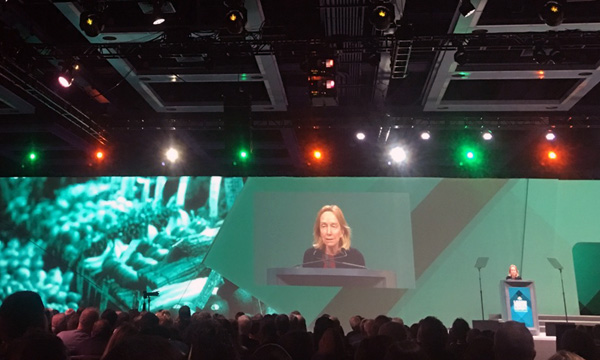 Stressing inclusivity, Doris Kearns Goodwin told a healthcare audience that we can all be leaders and learn leadership qualities from past presidents. She is a Pulitzer Prize-winning author and historian.

“Let us learn from our past leaders—how they led, how they inspired, how they dealt with adversity, how they communicated with others. This is how we evaluate leaders,” said Pulitzer Prize-winning author and historian Doris Kearns Goodwin to a healthcare audience at this year’s Association of American Medical Colleges (AAMC) Conference in Seattle.

At a time of heightened anxiety, uncertainty, and seemingly unbridgeable divides, Goodwin’s stories seemed to nourish the audience, hungry to learn more about past presidents whose leadership qualities carried the country forward at uncertain times in history.

“Leaders don’t have to be just in the White House. Take time to think about the larger picture and a belief that you are not leading just your own narrow life . . . but a life of a community. This is how we create the America we want, an inclusive America.”


As she spoke, Goodwin brought to life Abraham Lincoln, Theodore Roosevelt, Franklin Roosevelt, and Lyndon B. Johnson (for whom she served as a White House fellow), as well as Eleanor Roosevelt all of whom she has written about in biographies.

She revealed their nature, integrity, and leadership traits through stories of humor, heartache, fate, and grit—the most democratic of life’s elements that affect and shape us all. Goodwin emphasized that everyone can learn from these past leaders and practice such leadership in their own lives.

“Leaders don’t have to be just in the White House. Take time to think about the larger picture and a belief that you are not leading just your own narrow life . . . but a life of a community. This is how we create the America we want, an inclusive America,” expressed Goodwin, who was coined “America’s historian-in-chief” by the New York Times.

What are some of the leadership qualities that have made America great?

“You cannot have a democracy without this,” said Goodwin. It is the ability to empathize with others, particularly those whose lives are quite different from your own. “Never be indifferent to sickness and despair,” said Johnson, who signed the Medicare Bill in 1965.

Often this compassion is awakened through one’s own hardship, as it was for Franklin Roosevelt, whose mind and humility were strengthened, even as his athletic body was crippled by the paralysis of polio. “Having led a privileged life, this motivated Roosevelt to put himself in the shoes of the poor, the underprivileged, those whose fates were dealt an unfair hand,” said Goodwin.

“To motivate through trials of fire and trust that a worthy ambition can carry you forward” said Goodwin, pointing out the trials of poverty, loss, and heartache in Lincoln’s early life before he was forced to contend with a distraught, conflict-ridden nation, and the resiliency of Teddy Roosevelt, whose sickly body was wracked by asthma; his father told him that he had the mind but not the body to be strong. Roosevelt threw himself into a physical regimen to strengthen his body.

Goodwin speaks of how these presidents were not threatened by those who questioned them, but rather surrounded themselves with some of the strongest minds of the times to pull in different perspectives. “Move beyond the confines of an insulated world,” is how Goodwin described it, using as an example Franklin Roosevelt, whose hunger for adventure exposed him to a wider world. Lincoln placed himself among a “team of rivals.”

“Our great leaders took time off to relax, to shake off anxiety, to find time to think,” said Goodwin. Franklin Roosevelt walked in the woods; Lincoln attended the theater and also regaled his fellow Americans with stories in taverns at night on his travels through the country. “Sometimes these stories had a moral to them at the end, but sometimes they were just simply hilarious,” said Goodwin. Taking time to reflect allows us to listen to others and learn from our mistakes.

“Rigorous listening can do wonders,” said Goodwin. An audience member suggested the need to create “radical listeners.” The ability to intensely listen to each other—doctors, students, nurses, managers, lab technicians and to patients—across many divides can be termed “healing listening.”

Goodwin tells of the night Lincoln was shot. He lived until the next morning surrounded by his cabinet.  As his heart came to a stop, a cabinet member declared, “Now he belongs to the ages.”

“Lincoln would never have imagined how long his reputation would reach into the future,” said Goodwin. Halfway around the world, Leo Tolstoy, who had met Lincoln, shared with his countrymen that “Lincoln’s greatness consisted in the integrity of his character and his moral standing.”

“Lincoln said that if each person makes that individual difference than you’ve done your job,” said Goodwin. “We’ve come through worse times before in American history; we’ll come through this one.”