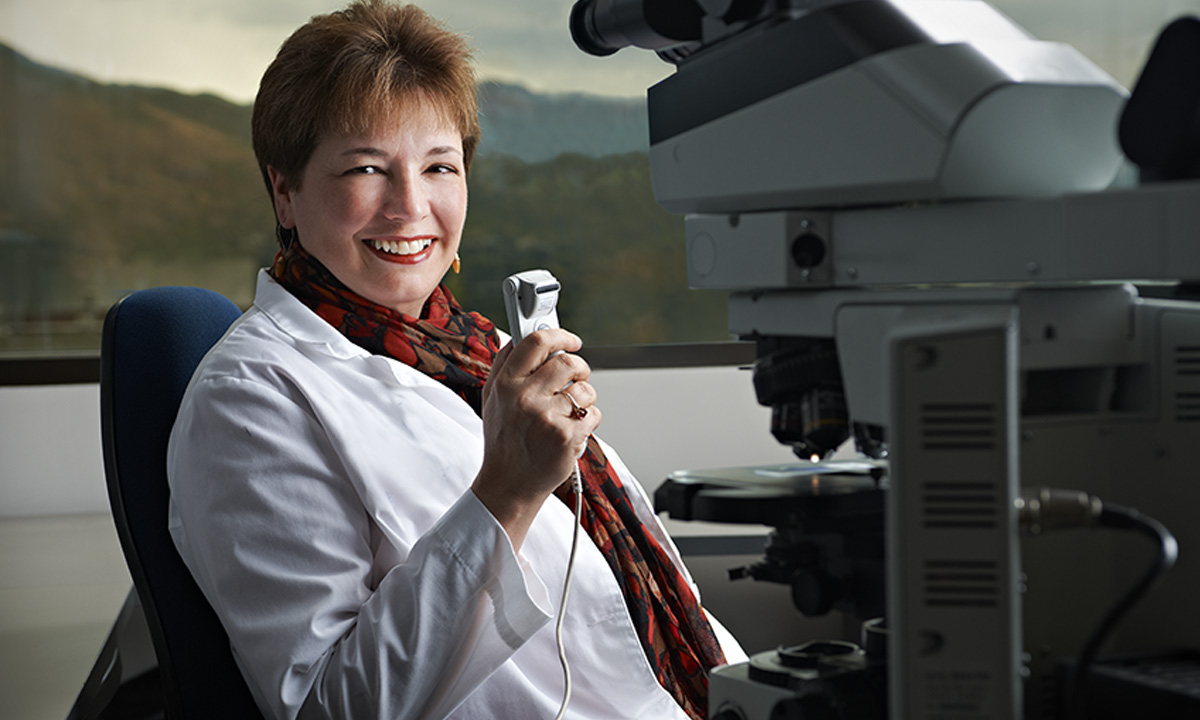 For a patient battling lung cancer, the discomforts and risks of undergoing repeated biopsies, surgeries, and radiologic scans can now be replaced by a far less invasive method. Cell-free tumor DNA (ctDNA) technology is revolutionizing the diagnosis and treatment of cancer, and has spurred the development of a new test identifying target drug therapies for patients diagnosed with non-small cell lung cancer (NSCLC), particularly those who carry a specific gene mutation (EGFR T790M) in their tumor.

In the United States, lung cancer is the deadliest cancer for both men and women and claims more lives than colon, breast, and prostate cancer combined, according to the American Cancer Society. About 85 percent of lung cancers are NSCLC.

Scientists have discovered that tumor cells which shed DNA pieces into the bloodstream are ideal biomarkers for “reading” and monitoring the cancer. Often called “liquid biopsy,” ctDNA technology involves simply taking a blood sample from the patient, as opposed to performing an invasive tumor tissue biopsy or surgical resection. ctDNA can reveal whether a drug therapy is still effective or if the patient has built up a resistance to the drug.

The T790M mutation of the EGFR gene is one such biomarker, and ARUP is the only large, national reference laboratory to offer a new clinical test known as EGFR T790M.

About 10 to 35 percent of patients with NSCLC have a primary mutation in the EGFRgene that can be targeted by specific tyrosine kinase inhibitor drugs. Two-thirds of the patients who later acquire resistance to these chemotherapy drugs will have a detectable second-site mutation at T790M in the EGFR gene.

“I think it would be fair to liken the ramifications of ctDNA in cancer care to the monumental importance that radiology has played in cancer diagnosis and monitoring. I wouldn’t stop there, but would also liken ctDNA to the great significance that antibiotics have played in the fight against infection,” expresses Mary P. Bronner, MD, the division chief of Anatomic Pathology and Oncology at ARUP, who is also a professor of pathology at the University of Utah.

“Like radiology, ctDNA allows us to diagnose cancer and cancer recurrence, but even earlier due to the increased sensitivity of the test and the far shorter testing intervals made possible by simple blood draws at decreased cost. Like antibiotics, personalized tumor-susceptibility testing by ctDNA can also target new specific chemotherapy drugs to individual patients’ tumors, akin to the power of targeted antibiotics for bacterial infections.”

ctDNA’s sensitivity not only allows for earlier detection but more accurately represents the whole tumor burden in the patient, in contrast to the tiny tumor fraction tested from a biopsy or resection. The problem with such limited samples is that tumors are highly heterogeneous, or varied, in their cellular and genetic makeup, so limited samples may easily miss important, treatable tumor changes. Since all cells, including tumor cells, are exposed to blood flow, ctDNA shed into the blood stream from the entire tumor or its simultaneous spread to other organs; this offers markedly improved tumor analysis through blood sampling.

Instead of multiple radiologic imaging scans, which provide limited information, drawing blood at shorter and regular intervals provides more continuous insight into the cancer’s progression and whether a drug therapy is still working. Building up a resistance to drug therapy is common among lung and all other cancers, so knowing if and when to try a new therapy is crucial information. For those lung cancer patients with the EGFR T790M mutation, new chemotherapy drugs have been introduced that specifically target this mutation.

“Using highly sensitive technologies, such as digital droplet PCR, this test can detect lung cancer recurrence as well as tumor resistance to targeted chemotherapy drugs, and permit personalized therapy for the T790M mutation,” adds Wade Samowitz, MD, who oversees Solid Tumor Molecular Diagnostics and Histology at ARUP Laboratories and is also a professor of pathology at the University of Utah.

ctDNA technology is being developed for all cancers and holds tremendous potential for improving patient care. The possibility of using simple blood testing to screen for early curable cancer, honing in on what might be the optimal blood sampling intervals to detect recurrence and drug resistance, among many other opportunities, are all the subject of intense research by the cancer care community.  We are only now seeing the very beginning of how ctDNA promises to revolutionize cancer care.