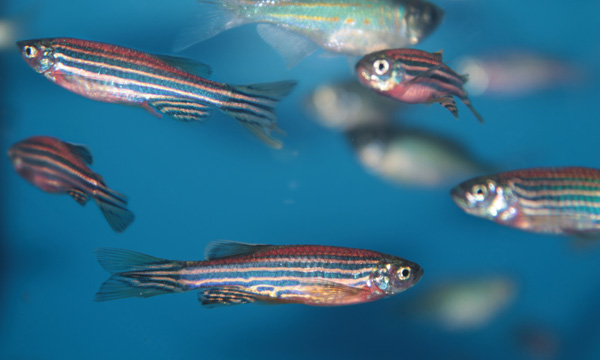 More than 4,000 children and teens are diagnosed with brain cancer each year and the disease kills more children than any other cancer. “Treatment options for this pediatric cancer are terrible right now, which is why development of an animal model for studying this cancer is an important step,” says ARUP Laboratories Medical Director Rodney R. Miles, MD, PhD.

Miles contributed to a study along with researchers from the Huntsman Cancer Institute (HCI) published last week in the journal Cell Reports. It states that they have identified an existing group of drugs that appear to reduce or eliminate a certain subgroup of childhood brain cancers while sparing normal brain tissue.

The research was conducted using a new zebrafish animal model system developed by the researchers, which closely resembles an aggressive subtype of pediatric brain tumors.

"For many pediatric brain tumors no cell or animal model exist to test targeted, or personalized, medications that could significantly improve survival and alleviate the harmful side effects of conventional therapies," stated Rodney Stewart, PhD, an assistant professor in the Department of Oncological Sciences at the University of Utah and an HCI investigator. "Indeed, children with rare brain tumors have few options for life-saving treatment. Our hope is by creating this animal model we will be a step closer to finding effective therapies."

“Animal models allow us to start testing compounds in a controlled setting and pave the way for human clinical trials –this is the process for which novel and effective therapies come about for cancer,” says Miles. “As much data as we can accumulate in a model system can help prepare us for eventually treating patients.”  He points out that the rarity of the disease means not a lot of human tissue is available for study.

The researchers studied a particularly aggressive pediatric brain tumor, known as primitive neuroectodermal tumors of the central nervous system (CNS-PNET) for which few animal or cell line models exist. Without an animal model or cell lines, Stewart explained, treatments could not be tested. Over the course of seven years, this team of researchers worked to develop a model which, at the genomic level, closely modeled the human condition they hoped to study.

“Animal models allow us to start testing compounds in a controlled setting and pave the way for human clinical trials –this is the process for which novel and effective therapies come about for cancer. As much data as we can accumulate in a model system can help prepare us for eventually treating patients.”


Dr. Stewart credits discoveries announced by two other groups studying similar cancers that opened the way for his group to move forward. "They were able to re-classify CNS-PNET tumors into distinct subgroups at the molecular level. That opened up a new avenue for our team because that stratification made it possible for us to really nail down what the zebrafish brain tumor model represents."

"We spent a lot of time comparing brain tumors arising in fish with related human brain cancers at the molecular genetic level," Stewart says. "This is important because these childhood brain cancers are rare and as a result, there are few patient samples to study for comparisons."

To construct a reliable model, human tissue was necessary. They reached out to several groups, including Primary Children's Hospital in Salt Lake City and The Hospital for Sick Children in Toronto.  Miles helped by looking at protein expression patterns in the human tumors to show that a subset of CNS-PNETs have an oligoneural phenotype that correlated with MAPK pathway activation.

Using the model, Stewart's lab was able to test already existing compounds to see if they could find a targeted therapy that would work on one of the newly identified subgroups: the oligoneural or NB_FOXR2 CNS-PNET subgroup. Through work they had done to create the tumor model, they knew that a particular drug already in human clinical trials might work.

"When we treated the fish with MEK inhibitors—drugs that inhibit an enzyme in the MAPK pathway— they exhibited a remarkable response," says Stewart. "Not only was the tumor burden reduced, it completely eliminated the tumor in about 80 percent of the fish and those tumors have not come back. This is a durable response from a transient treatment. It's what we look for in cancer therapy, an effective drug that can be taken for a certain amount of time but, after the cancer is gone, patients can stop taking the drug and go on living their lives."

Stewart is careful to emphasize that while the brain tumor type between fish and humans is similar, more studies are needed to determine if the results can be translated into the clinic. He would like to see his discovery in the hands of physicians as soon as possible. "Currently, the outcome for children with these cancers is deplorable. We don't want to wait much longer," he says.