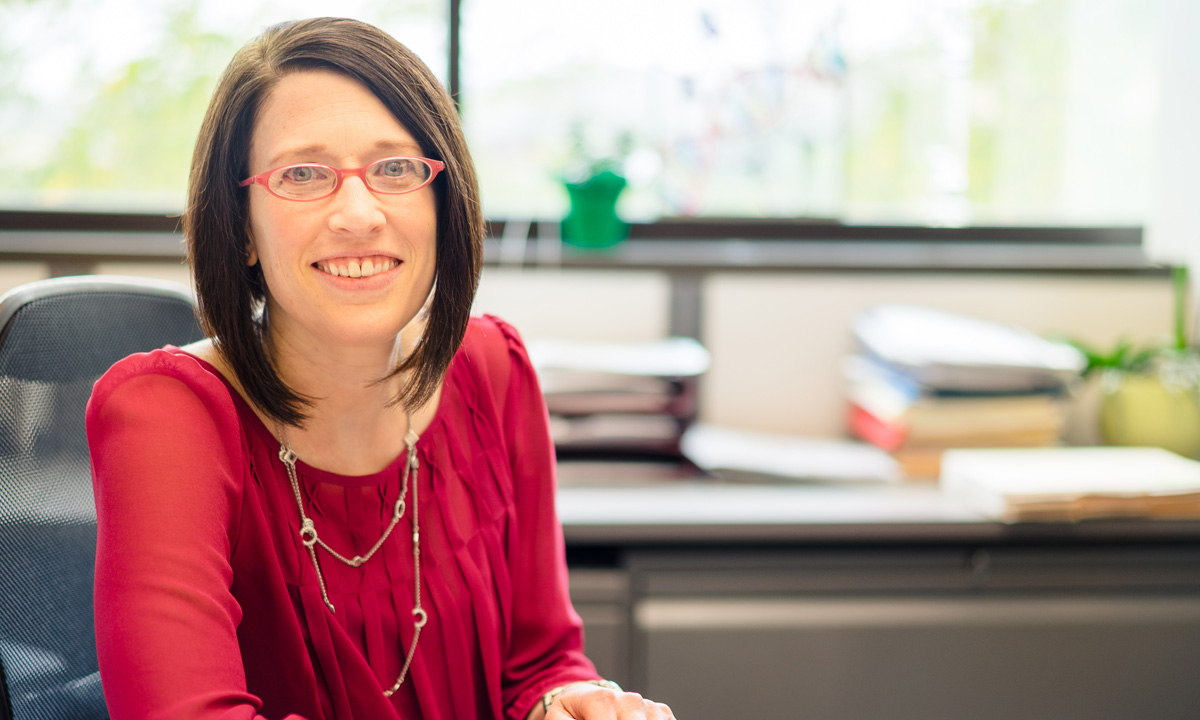 “I love that laboratory medicine provides such an important service. After all, you can’t just x-ray a hormone to see if it is working. You need clinical laboratory tests to tell the whole story,” says Joely Straseski, PhD, medical director of Endocrinology.

While slowing down a woman’s biological clock remains as futile as turning back time, reproductive medicine is finding a way to peer inside the clock to gauge just how fast it is ticking.

One such clue is a test measuring anti-Müllerian hormone (AMH) concentrations, reflecting the activity of the ovaries during a woman's lifetime and estimating her remaining egg supply.

Where a woman falls on this fertility scale may help her learn the likelihood of becoming pregnant now and how that might change in the foreseeable future.

This is knowledge in demand considering one-third of the approximately 20 percent of women who have children after 35 will experience fertility issues, according to the Centers for Disease Control and Prevention. For example, when levels of AMH fall below a certain level, the infertility treatment in vitro fertilization (IVF) becomes less successful.

“AMH testing can be helpful for women who are 35 and older and determining their fertility options,” says Erica Johnstone, MD, MHS, a University of Utah fertility and reproductive endocrinologist. “Is the window rapidly closing or is there more time?”

Sometimes described as the new “egg timer,” AMH levels may provide women with a sense of how long their fertility might last.

“There isn’t a specific level of AMH that will let you know whether you will or won’t get pregnant, but it can show you whether your ovaries are aging more quickly or more slowly than average,” says Johnstone, emphasizing it provides insight into the quantity not the quality of the eggs. Currently, age is the strongest predictor in estimating egg quality.

Women who are having trouble getting pregnant may have their AMH levels tested and then be referred to a fertility specialist. Or, women who are opting for IVF may be tested so their specialist can better tailor hormone treatment to optimize the success of the procedure. “With the cost and emotions involved in IVF treatments, you really want to be as accurate as possible in prepping a woman’s body for implantation,” stresses Straseski, whose laboratory has seen a sharp increase in AMH testing in recent years.

While an antral follicle count (AFC), via a transvaginal ultrasound, is the gold standard for determining a women’s egg count, AMH concentrations correlate with AFC better than any other currently available options. AMH testing has been around for more than five years, but the sensitivity of the test has progressively become more honed. Last year, ARUP Laboratories implemented a new ultra-sensitive test that is more than 20 times more sensitive than any other AMH test available.

Where Did This “Anti” Hormone Come From?

Both boys and girls are born with AMH in their bodies; boys have a much higher level of it than girls. In boys, the embryonic testes produce anti-Müllerian hormone, causing the Müllerian (female) ducts to regress and the Woolfian (male) ducts to survive—hence the term “anti-Müllerian” hormone. In the ovaries, AMH is important in the early stages of follicle development and is actually produced by granulosa cells in ovarian follicles.

In utero, females have a “primordial follicle pool” teeming with seven to eight million eggs. The majority die off, with a pool of approximately one million remaining at birth. Not all women are born with the same number of eggs or lose them at the same rate. Beyond age, genetics, exposure to chemotherapy and radiation, and certain medical conditions can also influence ovarian reserve.

At puberty, young women have about half of the eggs that they were born with, and with age that supply continues to decrease. “Every month you take about two dozen eggs from your “bank.” A few eggs grow bigger, and one dominant follicle is released during ovulation. As you approach menopause, your bank account continues to deplete,” explains Straseski. The natural depletion of eggs ensures viable offspring; as the quality of the eggs fades with age, the quantity goes down.

Insight into an Infant’s Gender and Motherhood After Chemo

While the bulk of AMH testing is linked to women and fertility, AMH testing may also be used to help determine the gender of a newborn born with ambiguous genitalia, since girls have lower levels of AMH at birth than boys.

Genital anomalies are estimated to occur in one in 4,500 births. Some infants may have testicles that have not yet descended; others may be born with both male and female genitalia. The ability to diagnose these conditions has greatly improved in recent years due to advances in laboratory medicine such as AMH testing.

“The study of AMH is a relatively new area, with progress being made for multiple conditions,” says Straseski, an enthusiastic researcher in the area of AMH. “In the area of infertility, we’ve never had that many tools. Now we may have found something that could provide key information.” She adds that more studies are needed to realize the true potential of AMH testing.

“I love that laboratory medicine provides such an important service,” says Straseski. “After all, you can’t just visualize or X-ray a hormone to see if it is working. You need clinical laboratory tests for that.”