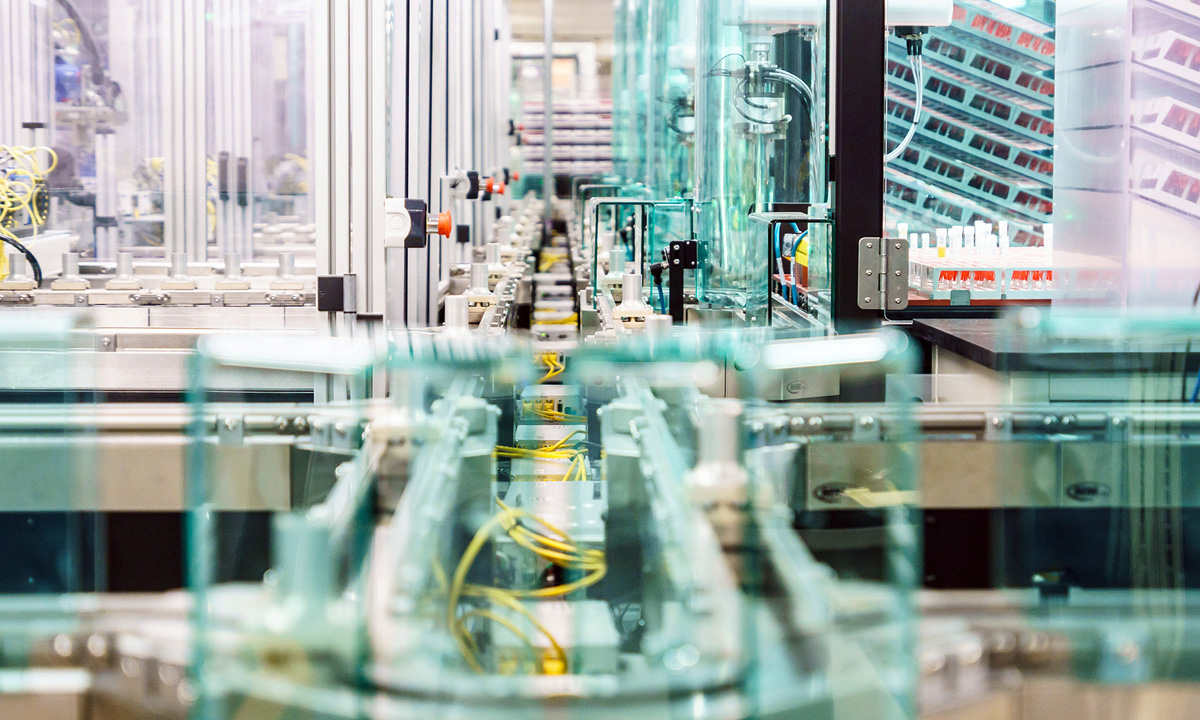 “ARUP is one of the most automated laboratories in the United States and the only one in the country to achieve Six Sigma quality for any pre-analytic metric,” asserts Dr. Charlie Hawker, PhD, MBA, who is recognized worldwide for his innovations in automation in the clinical laboratory industry and known fondly as the grandfather of ARUP’s lab automation.

Now, with the recent implementation of the MagneMover LITE automation track system—extreme next-generation technology—in combination with ARUP’s proven internal IT and engineering creativity and skill, ARUP’s quality is likely to improve even more, opening the possibility for additional metrics that could achieve Six Sigma quality.

ARUP’s new track technology completely eclipses that of the previous 16-year-old conveyor system. Now, specimen-filled pucks can potentially move at a top speed of two meters per second along the track, which has no moving parts and depends on linear, mini-motors embedded inside the track. Sixty motors are in every meter of the track, and each one is unique, magnetically attracting pucks swiftly and sequentially. ARUP’s system also includes ten high-speed sorters and seven pick-and-place binders, all built in-house.

“Now that is the right size and format for our labs,” thought Hawker, when he first saw the MIT-engineered technology introduced at a conference in 2009.

Honing lab automation ensures reliability (less downtime), expedites processes (faster turnaround time), and allows the opportunity for fewer errors to occur (i.e., lost specimens, mislabeling, mis-sorting). “Six-Sigma quality is possible because of our automation,” emphasizes Hawker. “Every manual handling step that we eliminate is a step where someone could have made a mistake.”

Staying on Track Despite Transition

In order to minimalize downtime while implementing the new track system, the original track was moved and continued to run as the new system was installed. Track action stopped for only one day. For Group Manager Clint Wilcox, whose team implemented the track, it is the adaptability of the track for future innovation that is one of its strongest features. “It gives us the ability to create and integrate expansion without being locked into third parties,” explains Wilcox, who rattles off a number of automations add-ons that are currently in the works.

This allows ARUP’s experts complete control to manipulate the mechanics and the software, tailoring it to the laboratory’s unique needs. This customization is what makes it one-of-a-kind in the industry. “For example, we took MagneMotion’s software and wrote our own software—including routing software and the loop system,” says Hawker. ARUP’s unique needs include accommodating highly complex, sensitive tests and managing more than 40,000 incoming specimens daily—each connected to a patient.

“The versatility of the track’s technology has allowed us to stay within the same footprint but significantly increase our capacity for the future,” says Project Manager Heidi Kildee. She notes that with few moving parts (i.e., motors, chains, sensors), maintenance costs are minute. “The maintenance involves just dusting it off,” quips Hawker, who expects that ARUP will financially benefit from this system.

Fewer needs for labor, parts, and maintenance contracts decrease costs as well. Increased reliability minimizes the likelihood of downtime and length of it if something is askew. Now service interruptions are more likely to last minutes versus hours, often just requiring a “rebooting” verses a new part or mechanical repair.

While it’s too early to analyze data and the new system’s impact on quality metrics, Hawker emphasizes that it is the “overall automation enterprise”—the collective effect of all the parts of ARUP’s system—that has and will produce ARUP’s impressive results. To learn and see more about these moving parts, visit: https://www.aruplab.com/testing/automation

* Six-Sigma quality is a method to identify defects in a process and figure out how to eliminate them to get as close to zero as possible. This quality is defined as 3.4 defects per million opportunities. In the clinical laboratory, non-analytic activities include client test order entry, specimen collection, specimen transport, specimen receipt in the lab, pre-analytic processing, transport, storage and retrieval, and other steps; these steps are where the majority of errors occur.