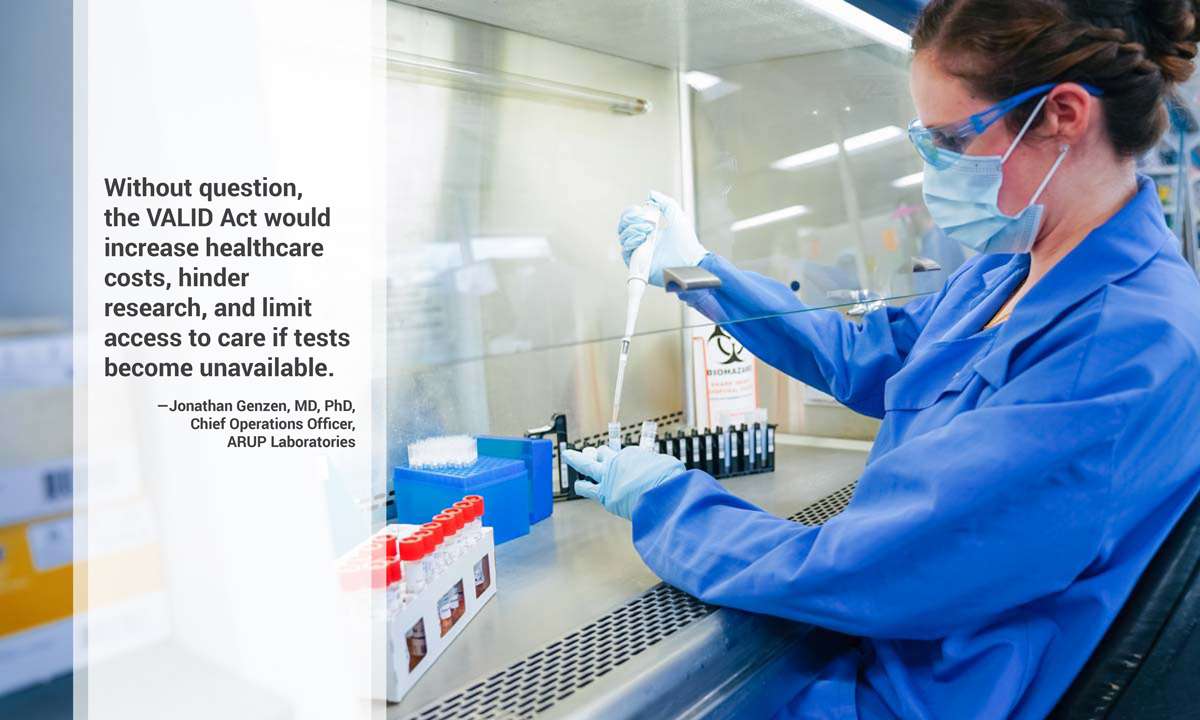 With the U.S. Senate Health, Education, Labor, and Pensions (HELP) Committee poised to advance a massive healthcare user fee law, ARUP Laboratories and other clinical laboratories are bracing for additions to the legislation that would alter the standards and regulations that govern laboratory-developed tests (LDTs) in ways that could potentially hinder laboratory innovation and patient care.

From routine blood tests to complex, customized molecular and genetic diagnostic tests, LDTs play a critical role in the existing healthcare infrastructure. They are used daily in the early detection or diagnosis of disease and to assess or monitor medical treatment, providing both clinicians and patients with timely and accurate information that influences the healthcare journeys of millions.

But under the proposed Verifying Accurate Leading-edge IVCT Development Act (VALID Act) of 2021, patients could face alarming roadblocks to LDT access. VALID would establish a new regulatory authority within the U.S. Food and Drug Administration (FDA) with oversight of LDTs and other in vitro clinical tests (IVCTs).

The new rules would impose a second layer of costly and time-consuming standards and regulation that could significantly impact, or even halt, the ability of academic, clinical, and hospital laboratories to continue to do the groundbreaking research that has led to the safe development of countless lifesaving tests.

Federal oversight of LDTs—sometimes called “home brew tests” because they are designed and used within a single lab—is already in place, Genzen explained. This oversight was established when the Clinical Laboratory Improvements Amendments (CLIA) of 1988 were enacted. Administered by the Centers for Medicare and Medicaid Services (CMS), the CLIA program sets the performance standards for test validation and certifies qualified laboratories.

As an academic reference laboratory and one of the nation’s largest testing facilities, ARUP has been CLIA certified for high-complexity testing for decades and is deeply committed to meeting the highest scientific standards in test development, Genzen said. All testing at ARUP is performed under the oversight of more than 100 medical directors, who have specialty board certifications and career expertise in advancing laboratory medicine.

The incredible work of board-certified medical directors and clinical laboratory scientists has long gone underrecognized, Genzen said. But the value of the lab and its pivotal role in healthcare came into clear focus during the COVID-19 pandemic, as laboratories moved at record speed to develop and offer testing to save an untold number of lives.

“Adding more regulation is counterintuitive to fundamental aspects of the practice of laboratory medicine, especially in the face of the accomplishments and invaluable contributions laboratories and scientists made in the early detection of SARS-CoV-2 and rapid delivery of patient services,” he said.

The VALID Act fails to acknowledge both the historical value of CLIA in supporting test safety and innovation in clinical laboratory settings and the ability of the CMS to address problems when they arise. Instead, its proposed new regulatory requirements would add administrative and financial burdens to an already safe and effective validation process, Genzen said. This would stymie innovation and test improvements, especially for tests less frequently ordered or with low reimbursement rates.

“Our concern is that the additional expense could outweigh the value an additional premarket review provides and could prohibit innovation and diagnostic offerings in hospital and academic medical center settings,” he said. “If this happens, patients will suffer because there may be fewer options, or they will have to wait longer for lifesaving tests to be developed.”

LDT innovation has also significantly advanced precision medicine through the development of targeted drug therapies for cancer that have provided a major benefit to patients, said Tracy George, MD, ARUP president and chief medical officer. As drafted, VALID could impact the success of the Cancer Moonshot and other initiatives that seek to reduce death from disease and improve patient care.

“Innovation depends on a regulatory environment that supports and encourages scientific discovery,” George said. “Creating new hurdles for academic laboratories that do this important work will ultimately hurt patients.”

VALID—an amendment to the FDA Safety and Landmark Advancements (FDASLA) Act—does propose a “grandfathering” system for existing tests, some of which have been in use for decades, but there is concern that the proposal could impact the routine modifications laboratories regularly make to sustain robust test performance, Genzen said.

Those would include modifications for different types of collection tubes or specimen types, changes to reflect specimen stability verification and storage and transportation validations, and minor supply modifications to address critical supply chain shortages that need to be tackled immediately to support patient care. Under CLIA, such modifications to LDTs are already possible in high-complexity labs, and ARUP believes that should continue without restrictions due to VALID.

“Minor modifications are already being maintained by CLIA and it’s working,” Genzen said. “It’s also clear the FDA’s own resources are limited, and if VALID is enacted, a third-party industry would be needed to take on this additional review work.”

ARUP is also concerned that the substantial new requirements for high- and moderate-risk IVCTs, and even listing requirements for low-risk IVCTs, may tax the available resources of most hospitals and healthcare systems, which are already juggling the challenges of shrinking reimbursement rates and tightening budgets. Although it is an unthinkable choice, Genzen said, some could be forced into deciding whether to limit laboratory services performed in-house.

“There is no room for additional regulatory costs in most clinical laboratory settings,” he said. “We consider it incredibly important that clinical laboratories be able to continue to provide essential diagnostic services for patients.”

ARUP strongly believes that regulatory clarity is important, especially as the clinical laboratory has operated with some uncertainty for many years, Genzen said. But in its current draft, the VALID Act leaves unanswered questions about the standards and rules it would impose and fails to strike a balance between the priorities of the laboratory industry, manufacturers, healthcare providers, and patients.

“We are all patients. The safety and efficacy of our healthcare is a fundamental issue and one consistent with ARUP’s belief in transparency,” he said. “But the far-reaching scope of VALID and its impact on the entirety of the healthcare system warrants thorough examination and analysis, particularly regarding cost and regulatory burden on clinical laboratories.”

Given those concerns, ARUP would like to see the VALID Act removed from FDASLA for separate consideration and debate. This would allow for a more open and robust assessment of the broad impact of new regulatory pathways.

“It’s too important to get wrong,” Genzen said.