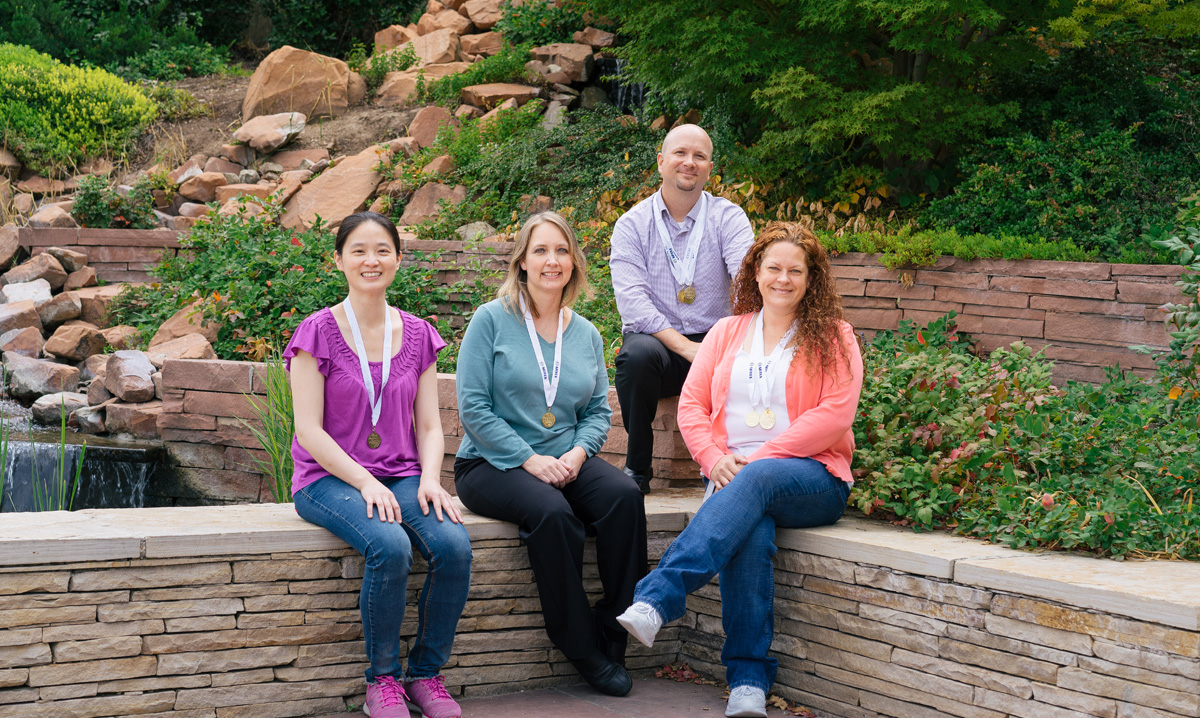 Call it the Spring Olympics of the medical laboratory world. For the second year in a row, ARUP won both the Gold and Bronze team prizes in the Artel-sponsored national Pipetting Challenge, held during Medical Laboratory Professionals Week each April. Haematologic Technologies, Inc., in Vermont took the Silver team prize.

Nationally, more than 350 individuals hailing from a variety of labs—including clinical and specialty reference labs, blood banks, research labs, and a few community technical colleges—participated in the challenge.

ARUP’s Laurie Henderson, a technologist trainee in the Reagent Lab, scored the lowest %CV of the entire competition with a precision of 0.06%. Coefficient of variation, or %CV, measures precision or reproducibility of data points. Henderson was one of almost 200 ARUP employees who participated. “Anybody at ARUP could compete, not just laboratorians,” says Barb Bonke who helped organize the competition. “In the spirit of lab week, we wanted everyone to get the experience of what goes on in a lab. It’s a fun way to bring everyone together and show off our skills.”

“It’s a lot of fun and a chance to cheer on and rib your teammates,” quips Samantha Beyer, who has won a Gold medal each of the six year she’s competed. “I’m a little competitive,” she admits. Beyer and others from her department, Referral Testing, create a team each year; both she and teammate Zachary Wilkey were in the top five pipettors.

All of ARUP’s scores were submitted to the competition. ARUP’s top ten pipettors, Team 1, averaged a CV of 0.11%, while the next ten, Team 2, averaged 0.15%. Artel awards a cash prize to these teams.

ARUP will hold an awards ceremony and celebration on June 21. Teams will be recognized, and all employees who scored a CV of less than 1% will receive an individual medal.

“Every day, life-changing medical decisions are made based upon the data generated by highly skilled laboratory workers, so it is reassuring to see clinical laboratories such as ARUP and Haematologic taking pride in ensuring their technicians practice good technique,” says Artel president, Kirby Pilcher.

Artel has been sponsoring this challenge since 2006; during that time, the lowest CV recorded was 0.04%. Although this record low was not achieved by an ARUP employee (yet), Artel’s Kerry Fairlie who helps oversee the challenge says, “ARUP has consistently submitted some of the best precision skills on record.” (Artel provides quality-assurance systems, support, training, and consultation services for laboratories using automated liquid handling instrumentation and manual pipettes. )

“The competition allows us to show off our expertise in pipetting. We’re known throughout the country as taking pride in our pipetting capabilities,” says Bonke, who worked in the immunology laboratory before moving into the education department. She trains new employees and conducts competency assessments on pipetting.

She explains that pipetting—measuring an amount of liquid (i.e., serum, reagent, plasma) and transferring it from one place to another—is one of the most important skills when doing a sample analysis. Patient test results are generated from the accurate measurements of that sample.

Top pipettor Henderson is aiming to break the ARUP record next year (CV 0.05%), which she tied in 2014. “It’s all about making sure your rhythm is exactly the same each time. It’s like doing a waltz; you have to count while you do it.”