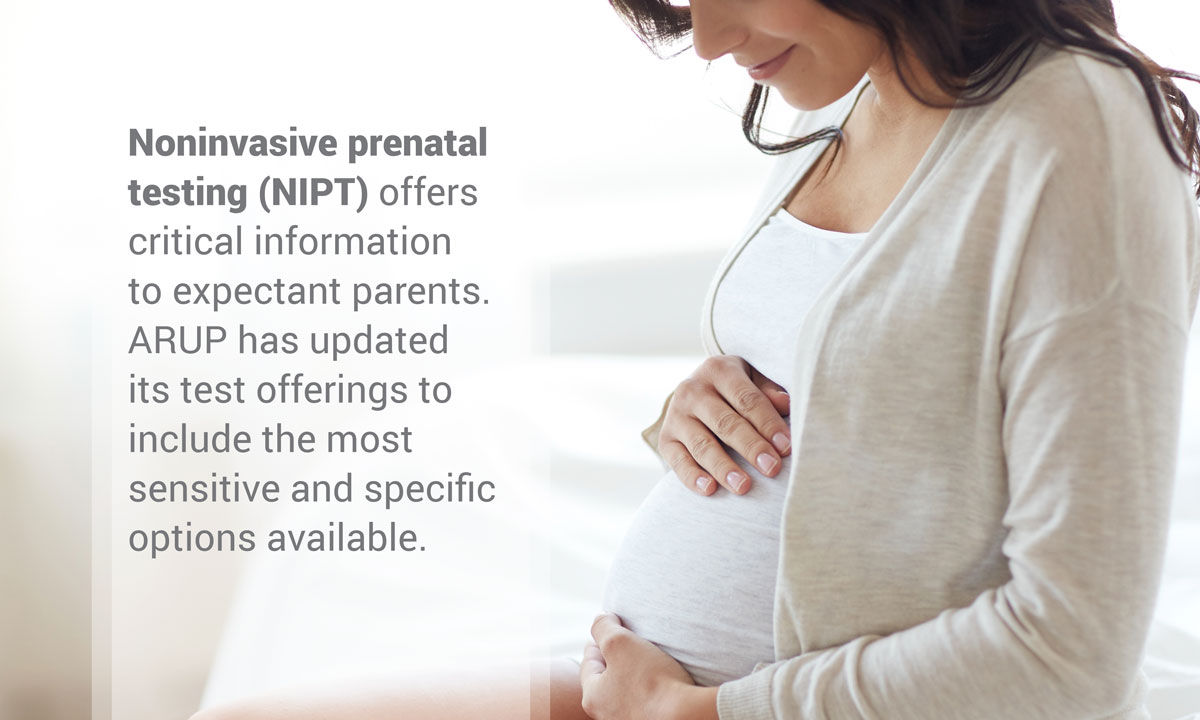 Prenatal care is essential to ensure that expectant mothers and their babies remain healthy throughout pregnancy.

Clinicians have long recommended routine laboratory screening to support maternal care and detect conditions that could impact normal fetal development. In recent years, those recommendations have been updated to include offering expectant parents the option of noninvasive prenatal testing, or NIPT, to assess whether a fetus has an increased risk for certain chromosomal abnormalities, including Down syndrome, which can affect fetal development.

“NIPT cannot diagnose or confirm a genetic abnormality. It can only screen for risk. But it can provide parents with important health information that can help them in planning for their growing family, no matter the results,” said Michelle Bosworth, MS, LCGC, a genetic counselor at ARUP Laboratories.

ARUP’s new Non-Invasive Prenatal Aneuploidy Screen by Cell-Free DNA Sequencing assay, available as of May 23, 2022, is the most sensitive and specific screening test offered to clinicians and their patients who are considering NIPT.

Performed on the Illumina VeriSeq NIPT Solution v2 platform, the test uses counting-based analysis to determine the probability that certain regions of the genome are over- or underrepresented. Data are generated through massively parallel whole genome sequencing. This process analyzes cell-free DNA (cfDNA) to generate paired-end data that are then compared with a reference genome. The comparisons help determine the likelihood of chromosomal abnormalities in the fetus. Results are reported as “high risk” or “low risk” for the test’s targeted chromosomal abnormalities, Bosworth said.

ARUP’s test is approved for screening in women carrying a single fetus and can be performed as early as 10 weeks into a pregnancy. It requires a single tube of maternal blood and carries no risk of miscarriage. The high-efficiency screening process is also fast and can deliver results to patients within five to seven days.

“That’s great for patients, who may be feeling overwhelmed and emotional because of the potential impact on their baby’s health,” Bosworth said.

She recommends that parents collaborate closely with clinicians or genetic counselors to ensure they understand all of the benefits and limitations of NIPT, including how to interpret the test’s results, before deciding whether to have the screening test. Any high-risk result would require follow-up diagnostic testing using a method such as amniocentesis or chorionic villus sampling to confirm a chromosomal abnormality. Both methods carry a higher risk of miscarriage, she said.

Historically, prenatal testing for genetic disorders was recommended primarily for women with high-risk pregnancies due to maternal age or abnormal results on other screening tests. As technology has advanced and genetic tests have become more available, the perspective has changed, according to Bosworth.

Medical societies such as the American College of Obstetricians and Gynecologists (ACOG), the American College of Medical Genetics and Genomics (ACMG), and the Society for Maternal-Fetal Medicine (SMFM) now recommend that both prenatal aneuploidy screening and diagnostic testing be offered as an elective option to all pregnant women, regardless of their individual risk factors.

Those who choose to have noninvasive prenatal screening have two test options: NIPT and maternal serum screening (MSS). Both are effective, but MSS, which may include a nuchal translucency ultrasound, only detects trisomies 21 and 18. Unlike NIPT, for which maternal blood can be drawn any time after 10 weeks of gestation, MSS is only available during the first and second trimesters of pregnancy: no earlier than 11 weeks and no later than 25 weeks of gestation.

Multiple studies have found NIPT is more accurate than MSS, Bosworth said. ACOG, ACMG, and SMFM all say it should be discussed as an initial screening option early in pregnancy.

NIPT uses rapid, next generation sequencing to screen for aneuploidies by searching for tiny fragments of DNA from the fetus that are not encapsulated in cells but are floating in the mother’s plasma. Known as cfDNA, the fragments are released from the placenta into the mother’s bloodstream when cells die and break down. They exist for only a short time and can be detected only in prenatal screening.

“Once you give birth, they persist for only a few hours and then are gone,” Bosworth said.

Because it is specific and unique to each pregnancy, cfDNA is easy to identify or “count” in the mother’s blood, she said. Its proportion relative to the amount of maternal cfDNA is referred to as the “fetal fraction” and is central to assessing the risk of aneuploidies.

When the fetal fraction shows that the quantity of fetal cfDNA is as expected, the fetus has a low risk of a chromosomal condition. Conversely, if the proportion is higher than expected, the risk for an aneuploidy condition is considered higher.

“The accuracy in this screening is that the expected quantity of DNA for a targeted chromosome is interpreted in the context of the relative amounts of fetal and maternal DNA, as well as other chromosome-specific characteristics,” Bosworth said.

Because NIPT is a screening assay, the goal for accuracy is not 100%, she added. Detection rates can vary from patient to patient due to multiple factors including maternal weight, which affects the fetal fraction. Each aneuploidy also has its own positive predictive value, or likelihood that a high-risk result truly indicates an affected fetus.

ARUP has validated its NIPT to ensure consistently high accuracy and has a team of genetic counselors available to support labs, hospitals, and healthcare providers in understanding all aspects of the screening.

In addition to the NIPT performed on the Illumina platform, ARUP continues to offer NIPT on the Natera platform. Although both can be used for the same fetal indications and will produce essentially equivalent results, the platforms vary in their respective analysis and interpretation algorithms.

The Natera platform differs from ARUP’s new test platform by using a selective sequencing analysis and targeting single nucleotide polymorphisms, or SNPs, the most common type of genetic variations, to identify differences between maternal and fetal DNA and predict likelihood of fetal aneuploidy.

In contrast to some other available NIPT assays, ARUP’s test does not look for microdeletions or genome-wide gains and losses associated with some birth defects or intellectual disabilities. The positive predictive value for that type of testing is low, and it has not been clinically validated. ACOG, ACMG, and SMFM do not recommend screening for microdeletion syndromes at this time.