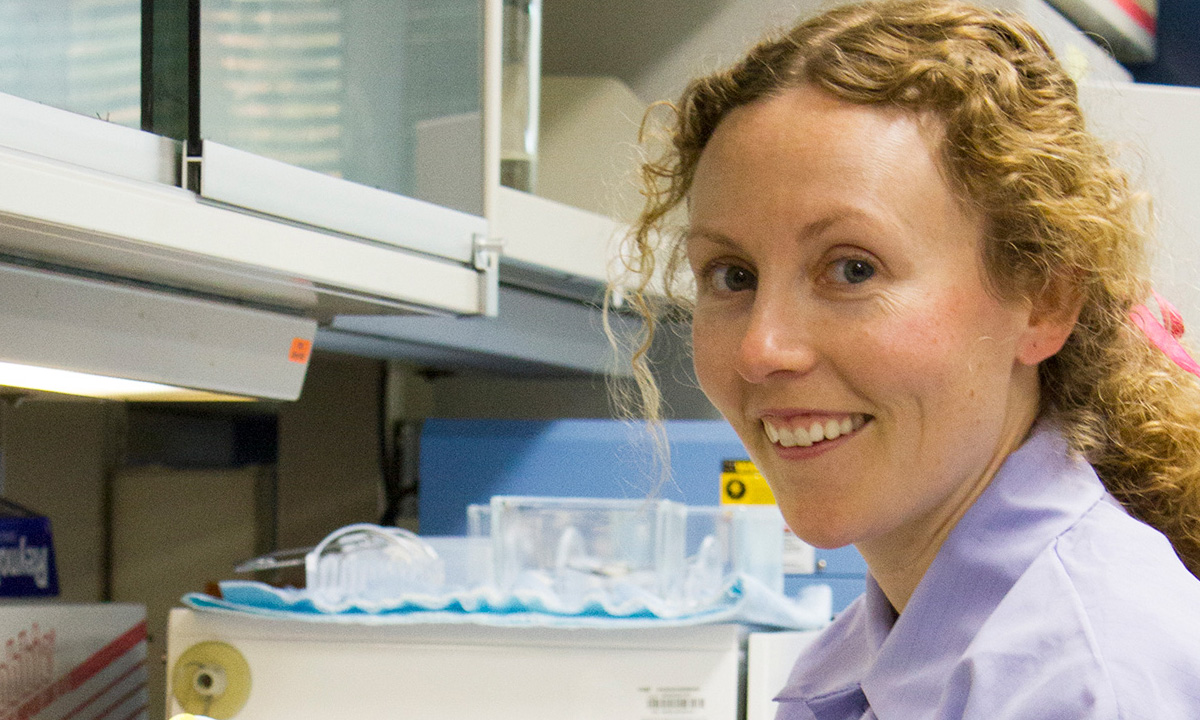 “There is no cure for HHT, yet if we can find new genetic modifiers or new genes, then we can potentially find novel therapeutics to treat these patients,” explains an enthusiastic Whitney Wooderchak-Donahue, PhD, a researcher with the University of Utah and ARUP Laboratories.

Last week, she received the 2015 Young Scholar Research Grant ($30,000) for her research proposal that involves focusing on patients’ transcripts (the RNA in the cell) via their blood samples to identify genetic modifiers in Hereditary Hemorrhagic Telangiectasia (HHT). A genetic disorder of the blood vessels, HHT affects approximately 1 in 5,000 people.

Wooderchak-Donahue was one of six recipients worldwide to receive the grant award from Cure HHT, an international organization that supports HHT patients and their families.

“Congratulations” was the first word she read in the email from Cure HHT, before she immediately began jumping up and down and high-fiving her colleagues.

“This would have never have happened without the guidance I’ve had from my mentor, Pinar,” says Wooderchak-Donahue. “She stands behind me all the way and is always promoting me and encouraging me to attend vascular malformations meetings around the world.”

She and Pinar Bayrak-Toydemir, MD, PhD, a University of Utah Associate Professor of Pathology and a molecular genetics and genomics medical director at ARUP Laboratories, discovered a new HHT gene in 2013 (published in the American Journal of Human Genetics). Bringing the number of identified HHT genes to four.

“Whitney is an outstanding researcher, a critical thinker, and very creative in finding solutions to research problems,” observes Bayrak-Toydemir. “She is now a recognized researcher in the field of vascular malformations and specifically in Hereditary Hemorrhagic Telangiectasia.”

“Patients only need one mutation in one of the genes to be diagnosed with HHT,” explains Wooderchak- Donahue. Soon after discovering the gene, she and Bayrak-Toydemir, created a Next Generation Sequencing (NGS) Panel to look for all four genes and mutations at once for each patient. (NGS technology allows researchers to interrogate multiple genes at once often providing a quicker diagnoses than a gene-by-gene approach.)

Why look for new genes in HHT? “Because we don’t know why 15 percent of the people with HHT show no mutations,” explains Wooderchak-Donahue. “To figure this out, we are focusing on finding new genes and genetic modifiers that may cause HHT,” explains Wooderchak-Donahue. “We are also looking for novel mutations in regulatory and noncoding regions in the known HHT genes that may have been previously missed in these patients using traditional HHT molecular testing.”

This blood vessel disorder gradually presents itself with frequent and sometimes severe nose bleeds and dot-like red lesions on the skin.

The most deadly aspect of the disorder is the arteriovenous malformations (AVM), which can form in the brain, lungs, liver. AVMs are direct artery-to-vein connections that can cause shunting, hemorrhage, and death.

Many people are not aware they have HHT until someone else in their family is diagnosed with it or suddenly passes away because of it.

It is a dominant disorder, which means if it runs in your family you have a 50 percent chance of having the disorder. “We’ve monitored a large family in Utah, where half of the 200 members have HHT,” says Wooderchak-Donahue. It is about as common as cystic fibrosis.

“HHT has life-threatening complications, so if we know the genetics for the patient and their families then we can monitor and treat them—early identification is key to saving their lives,” says Wooderchak-Donahue, who credits her Auburn High School chemistry teacher, Melinda Thompson, and her Western Illinois  University biochemistry professor, Lisa Wen, PhD, for turning her on to research.

"We are amazed at the passion and interest young researchers show for the Cure HHT cause," said Executive Director Marianne Clancy. "This is the first year we have been able to fund six projects, and we expect great things to come from all of them. It's this level of dedication that will lead to a cure."