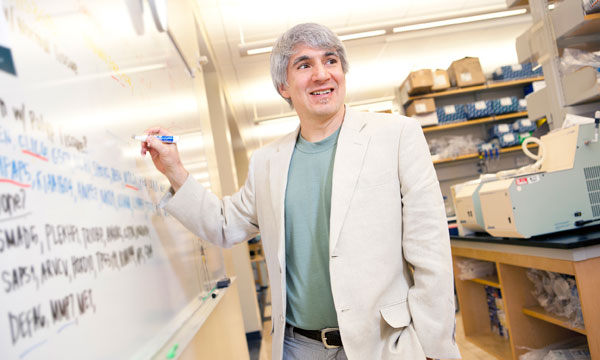 As thousands turn out this spring to run and walk in memory of loved ones lost to breast cancer, behind-the-scene researchers are running a race of a different kind to help physicians treat their cancer patients.

It is a race to acquire genetic knowledge, and success is dependent on collaborations and expertise from researchers worldwide. ARUP Laboratories, the University of Utah (U of U), and the U of U Huntsman Cancer Institute are spearheading this effort in Utah with the creation of the open-source BRCA1 and BRCA2 database—named after the two genes identified and linked to hereditary breast cancer. The database is used primarily by researchers, pathologists, geneticists, genetic counselors, and medical oncologists.

The purpose of this database is to provide information on BRCA1 and BRCA2 gene mutations and their impact on the risk of developing breast cancer, ovarian cancer, and certain other cancers.

"We started the BRCA database because we needed a list of carefully curated mutations and a tool to help interpret sequence variants that are not well classified," explains Noriko Kusukawa, PhD, director of New Technologies at ARUP. To create the database, Kusukawa reached out to Sean Tavtigian, PhD, a professor in the Department of Oncological Sciences at the University of Utah and a Huntsman Cancer Institute investigator. He led the complete cloning and sequencing of the BRCA2 breast and ovarian cancer susceptibility gene in 1995.

"Many public databases are not curated to be useful for clinical use," points out Kusukawa. "We wanted to make sure we had the expertise to do it right." Tavtigian's role involves analyzing all the contributed findings from researchers around the world to confirm credibility. Another team led by Rong Mao, MD, and Hunter Best, PhD, at ARUP Laboratories works with Tavtigian to upload new findings and verify literature reports on mutations classified as definitely pathogenic or definitely benign.

"The importance of having this available for anyone is they can go in and see what info is available on these variants, which is very important when you are doing test interpretation—is this variant benign or is this variant disease causing? Is it causing a change within a gene leading to this patient's symptoms?" explains ARUP's Tina Brunson, who is trained as a genetic counselor.

Open to All, Propelling Research and Life-Saving Treatments

The BRCA database is among ten other free, open-source databases focused on inherited diseases that ARUP provides to the public through its educational website, www.arup.utah.edu. This website is also home to a growing collection of multimedia programs that provides continuing medical education credits for free.

Open source means the databases are open to others but also open to collaboration, so medical scientists from around the world can submit findings that are then curated to confirm data credibility. Most people utilize the databases to review mutations that have not been confirmed by initial analyses to be pathogenic, benign, or somewhere in-between. These mutations are often referred to as “variants of unknown significance” (VUS).

The database contains approximately 300 BRCA1 and BRCA2 variants, originally reported as VUS, which have been clinically classified using an algorithm developed as a result of international collaborations. Within this algorithm, Tavtigian has honed a predictability tool (known as in silico sequence analysis) that allows users to look for the probability of pathogenicity for sequence changes at any given position in the two BRCA genes. In total, the database contains all of the approximately 2,500 variants that have been publicly reported in the BRCA genes.

While this Mother’s Day weekend, tens and thousands will race in the Susan G. Komen Race for the Cure because breast cancer has intruded their lives in some way, researchers, far from the finish line, will continue investigating and collaborating to identify the causes, and perhaps one day, a cure.