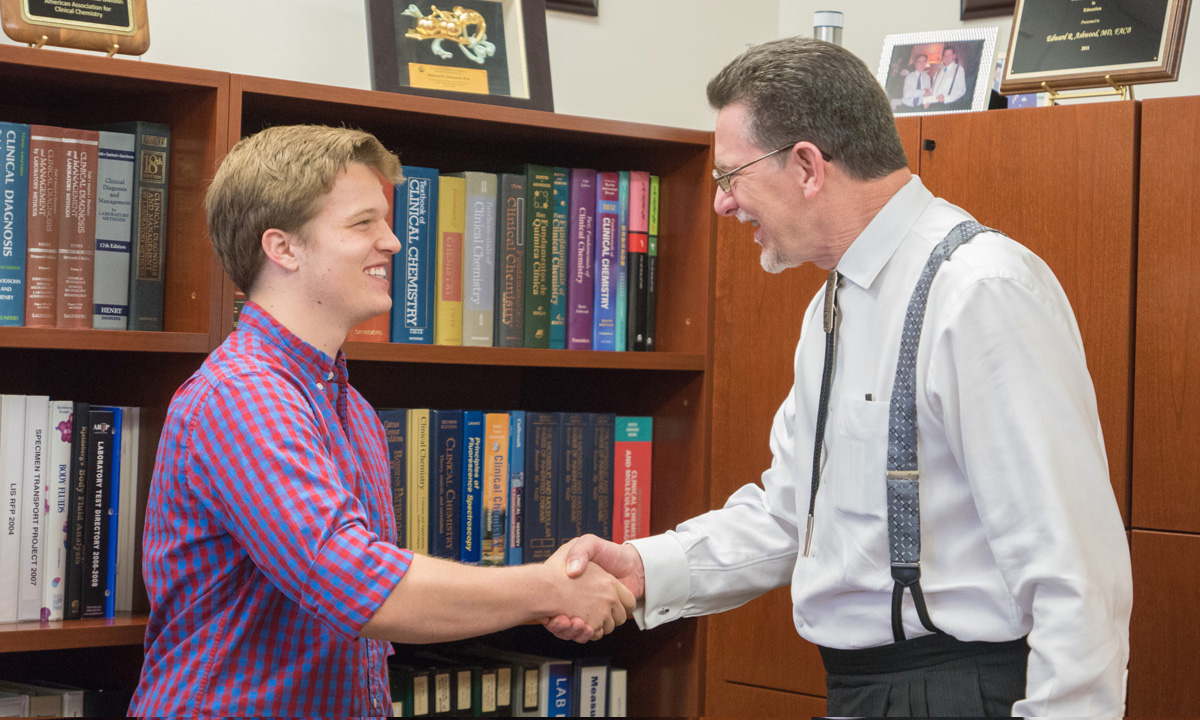 ​It was between Stanford, University of Southern California, and University of Colorado Boulder, but Austen Hastings' focus shifted when he received an ARUP Scholarship and was introduced to two outstanding programs at the University of Utah, the Honors College and the Business Scholars Program.

“The other colleges had some good programs too, but the scholarship just made it an easier choice—and the programs too, once I compared them closely with what the other schools offered,” says freshman Austen Hastings, who would otherwise be paying his own way.

“This is letting me live in dorms and get the full college experience instead of living at home and taking classes when I can afford to,” adds Hastings, who is pursuing a degree in biomedical engineering and business.

“These scholarships have allowed us to recruit the best and brightest in Utah. We’ve seen the average GPA and ACT scores of this freshman class increase and we attribute some of that to ARUP,” says Mary Parker, associate vice president, Enrollment Management referring to the $3 million scholarship money that ARUP Laboratories provided to the U.

U president David Pershing was instrumental in helping match ARUP with this opportunity to provide education help to so many students. ARUP is the laboratory arm of University of Utah Health Care.

Parker adds, “It has changed the university in terms of the way we recruit and retain students, allowing access to students who are academically qualified but can’t afford college.”

More than 700 students (mostly freshmen) earned ARUP scholarships based on outstanding academic performance. It allowed the U to court some of the brightest in the state, including more than 30 valedictorians who chose the university for their undergraduate education.

Students who have declared their major are pursuing educational career paths in a variety of areas, but mainly the sciences, engineering, and humanities.

“We’re proud that many of these students received out-of-state scholarship but chose to stay at the university,” says Dr. Edward Ashwood, president and CEO of ARUP Laboratories and a professor of pathology at the U's School of Medicine.

“We believe in the power of education—it is one of the key tenets of our company—and we want to encourage these bright people, who are pursuing all kinds of majors, to attend the University of Utah.”

The scholarships focused on three areas: access, achievement, and completion of degrees and provide financial reassurance for up to four semesters. ARUP’s Utah Promise Scholarships allowed academically qualified students from low-income families (150 percent of the poverty level) to attend the U.

“We are so deeply grateful for ARUP’s support in helping us to strengthen the university and in providing critical assistance to many, many talented students who would otherwise not be able to attend,” expresses Ruth Watkins, PhD, Senior Vice President for Academic Affairs. ” I cannot think of any better contribution to Salt Lake City’s economic wellbeing or to improving lives.”

“These undergraduates may be our future employees,” adds Dr. Ashwood. “We all benefit in making these opportunities for education here possible.”