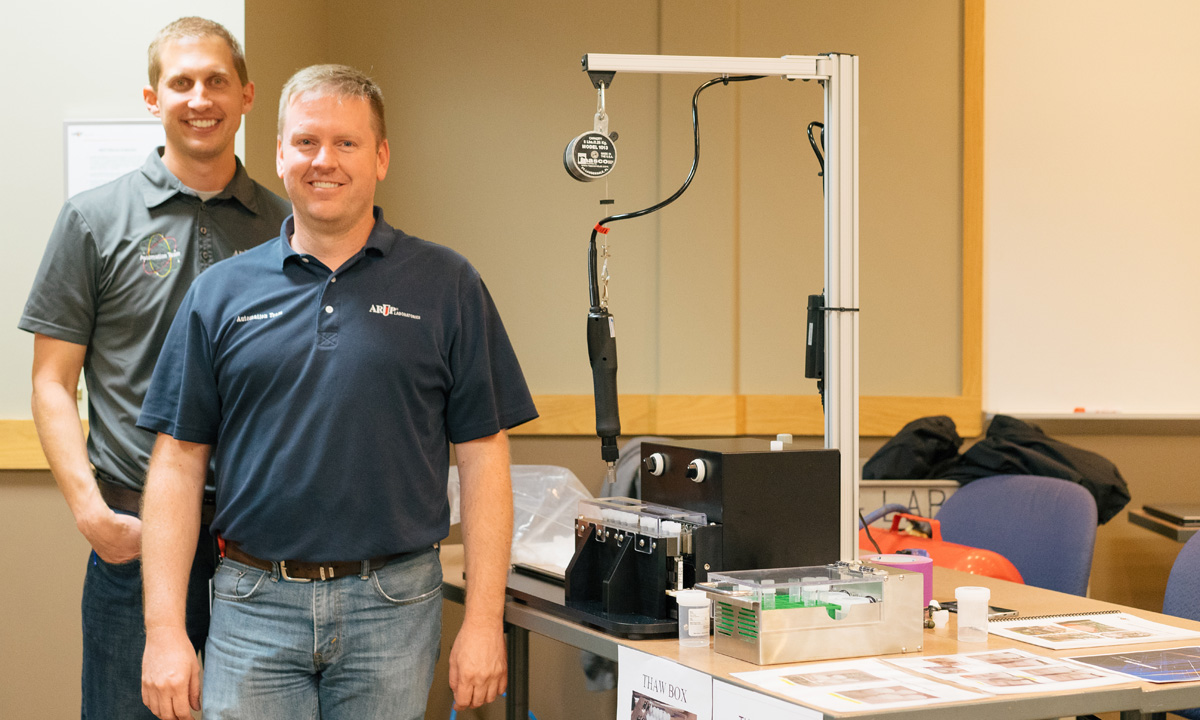 “It’s satisfying building something like this because it allows me to help someone do their job better and, usually, make their job more enjoyable,” says engineer Darby Nelson, who presented with fellow engineer Chris Semrow at ARUP’s annual Technology Fair, where ARUP-incubated innovations are shared.  The engineers are part of ARUP’s Automation Team and collaborated to create a thaw box and test-tube capper to meet the needs they observed in ARUP’s labs.

Thawing frozen specimens on the counter in the lab typically takes up to four hours, but that time is cut in half when using Semrow and Nelson’s thaw box. This device blows room temperature air around samples to speed up thawing time, and the constant flow of air prevents condensation from building up on the tubes, making them easier to handle.

When developing this device, Semrow and Nelson were careful to keep efficiency and usability in mind. “We built it not to take up much room on the counters in the labs, and can customize the size of the box to meet each lab’s needs,” says Nelson. The team was also able to ensure that the fan installed in the box would not be too loud and disruptive to the people working in the lab.

“It’s satisfying building something like this because it allows me to help someone do their job better and, usually, make their job more enjoyable.”


Unlike other products marketed for increasing specimen thaw time, this thaw box keeps the specimens enclosed so that any spillage remains inside the box. A lid on top of the box also ensures that should a spill or leak occur, there is no risk of the fan blowing specimen contaminates into the air.

In addition to the thaw box, Semrow and Nelson also developed a low-cost test tube capper and stand to alleviate the burden for techs performing this function manually. “The purpose of this instrument isn’t to increase speed; it’s to eliminate injuries for people who do this all day long,” says Nelson, citing blisters and carpel tunnel as common injuries. “The capper is designed to hold the cap on the tip of the tool so caps don’t fall and bounce around, creating possible contamination,” added Semrow.

“It is taking away a job nobody really wants to be doing anyway—screwing caps on and off—and frees up the tech’s time to be doing something more important,” adds Nelson.

A version of this device was built for ARUP’s Coagulation Lab, and, like the thaw box, it can be built to different specifications. It can also be fully or partially automated. Larger versions of this type of automation are available for purchase. However, these devices typically require a large investment,  more than most labs can afford. Nelson and Semrow’s model is extremely low-cost in comparison.