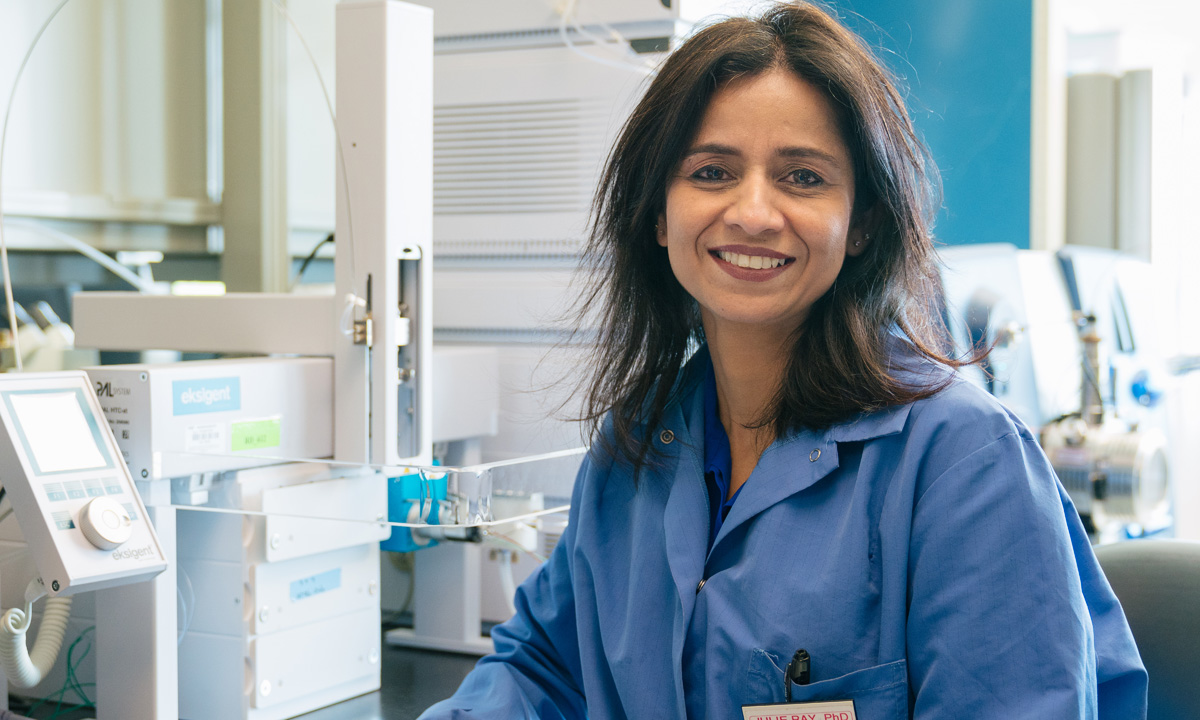 Now when a young woman sees University of Utah pain specialist Dr. Jill Sindt for chronic abdominal pain stemming from endometriosis, Sindt has another reason to steer away from prescribing certain addictive opioid pain medications, such as tramadol and fentanyl, as well as the non-opioid medication gabapentin. All three showed significant reduction in free estrogen in a recent study published in the Drug Testing and Analysis journal.

The study, in which Sindt was one of the investigators, revealed new information on how certain opioids and non-opioids influence both bioactive estrogen and testosterone in women and men’s bodies. While opioid medication has been reported to alter sexual function, it was not known whether non-opioid medications had similar effects.

Gabapentin is widely prescribed for such symptoms as restless legs, hot flashes, and nerve tingling; based on this study’s results, a clinician should think twice about prescribing this medication to women in their child-bearing years, since it has been shown to decrease free estrogen.

“We are seeing that opioid and non-opioid pain medications have different effects on different body systems; this suggests there are better and safer alternatives to opioids,” says Sindt.

Targeting the Most Powerful Part of Estrogen

“A lot of work has been done in this area, but in our study we were looking at how these pain medications impacted the free sex hormone levels,” explains ARUP Laboratories scientist Julie Ray, PhD, who contributed to the study. These free sex hormones, referred to as free testosterone and free estrogen (also known as bioactive hormones), are a very small percentage of the respective total hormones that are not bound to a protein.

“Measuring free hormones gives us a true representation of the bioactive fraction of the hormone,” explains Ray, who has developed several free hormone-related tests at ARUP. Because of the small size of these unbound molecules, they can travel more easily through capillary barriers into target sites—like breast tissue or sexual organs—and have a greater impact on a person’s health.

For women, the study found that the opioids hydrocodone, oxycodone, and morphine had no impact on free estrogen levels, while tramadol, fentanyl, and gabapentin significantly reduced levels of free estrogen. “Pregabalin showed no effect, which is surprising since it is structurally related to gabapentin,” adds Ray.

Gabapentin is widely prescribed for such symptoms as restless legs, hot flashes, and nerve tingling; based on this study’s results, a clinician should think twice about prescribing this medication to women in their child-bearing years, since it has been shown to decrease free estrogen.

For men, the study found that opioids such as hydrocodone, oxycodone, and morphine reduced free testosterone, while opioids methadone, fentanyl, and tramadol, and non-opioids gabapentin and pregabalin, had no effect.

Now when a male patient in his 40s comes in with chronic back pain, Sindt can explain that certain pain medications are not only addictive but could compromise his health by lowering testosterone levels. Testosterone doesn’t just impact sexual performance; it can also be protective for the body and help maintain muscle mass.

“It’s a more concrete example than pointing out the risk of addiction, which many patients feel will never happen to them,” says Sindt, who can discuss other options for pain relief without risk to hormone levels.

According to Sindt, for both estrogen and testosterone, the reason some opioids (methadone, tramadol, and fentanyl) had different effects than other opioids (hydrocodone, oxycodone, and morphine) may be because the former are part of the same subgroup of opioids, called synthetic opioids. These medications also affect serotonin levels in the body. “While this is an area for future research, the combination of opioid and serotonin action may have a different impact on hormone levels than opioids alone,” says Sindt.

“Overall, the study’s results suggest that pregabalin seems to be the best choice for men and women as a pain medication,” says Ray.

The study involved 120 patients drawn from a data bank of de-identified specimen samples collected by ARUP that had tested positive for opioids and non-opioids. The samples were tested for free estrogen and free testosterone levels and compared with a set of controls that tested negative for these medications.

“It lends more evidence to the case for using non-opioid pain medications, as these appear safer both from the standpoint of addiction and overdose risks but also from the perspective of adverse effects on multiple other body systems.”

Dr. Jill Sindt
U of U Pain Specialist


Some of the findings countered previous research findings, which might be due to unknown variables linked to a patient’s health history and conditions. Measuring follicle stimulating and luteinizing hormones, binding protein levels, and total testosterone and estradiol could provide better explanations.

Sindt, Ray, and their colleagues involved in the study are working on additional research that will account for these variables and look at how these medications may be affecting other free hormones, including adrenal and thyroid hormones.

The main take-away, Sindt explains,  is not so much that opioids have an effect on sex hormones—we have known that opioids affect testosterone and estrogen—but rather noting the lack of effect that some non-opioid pain medications have on hormone levels.

“It lends more evidence to the case for using non-opioid pain medications, as these appear safer both from the standpoint of addiction and overdose risks but also from the perspective of adverse effects on multiple other body systems,” says Sindt.