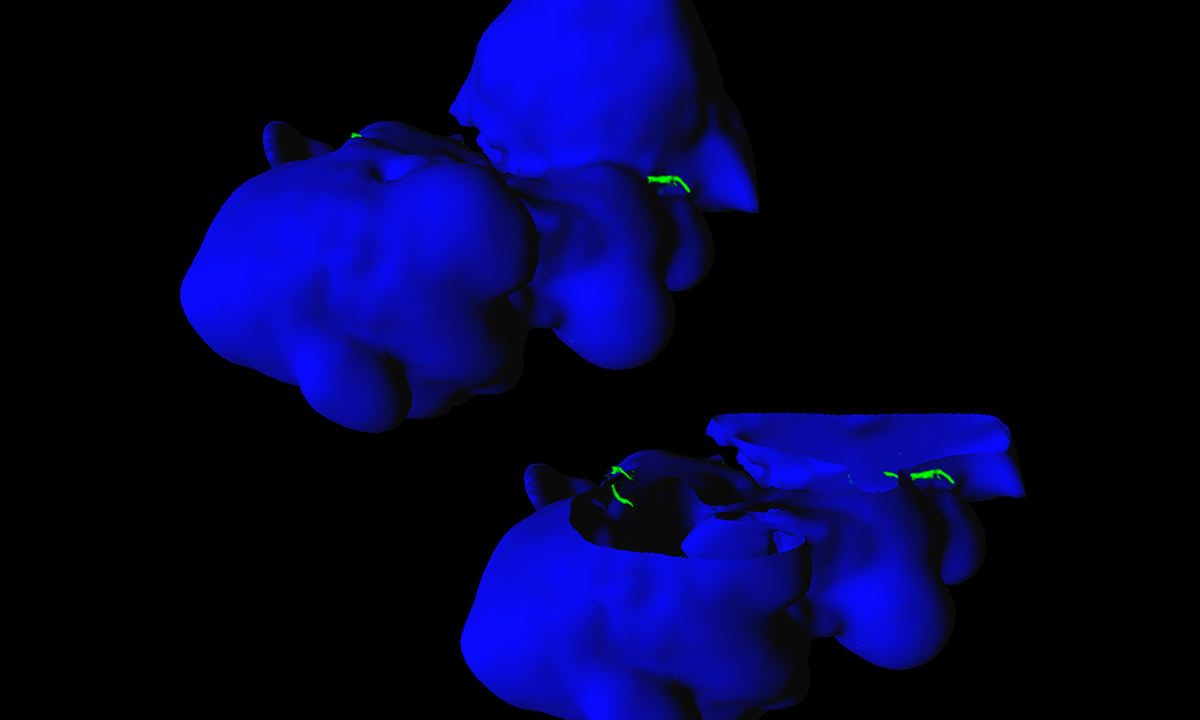 Ixodes scapularis (deer tick) salivary glands (displayed in blue) with invading Borrelia burgdorferi spirochetes (Lyme disease-causing bacteria; shown in green). The top left image is a 3D rendering of confocal microscopy z-stacks and the surface of the gland tissue. The lower right image is a digital cutaway of the top surface to reveal the bacteria inside. Two spirochetes are caught invading the salivary gland tissue.

A tick can be as small as a sesame seed. Its bite, however, can pack a serious punch and cause severe illnesses like Lyme disease or Rocky Mountain spotted fever.

Increasingly, tickborne illnesses are a threat to public health, according to the Centers for Disease Control and Prevention (CDC). Driven by changes in climate and land usage over the past two decades, tick populations have exploded and spread to new geographic regions of the U.S. In that same period, researchers have also discovered seven new tickborne pathogens that can spread to humans and cause disease during the March to November window when ticks thrive.

As a result of the increased tick population, the annual number of reported tickborne illness cases has doubled, growing from 22,527 in 2004 to 50,865 in 2019, the last year for which CDC data are available.

This process is particularly necessary with Lyme disease, which can have serious, long-term ramifications—including debilitating fatigue, muscle or joint pain, and memory fog or loss—if left untreated.

ARUP Laboratories offers a comprehensive slate of tickborne disease testing resources for Lyme disease, Rocky Mountain spotted fever, anaplasmosis, and ehrlichiosis to aid clinicians in making diagnostic and treatment decisions. The testing recommendations, along with a testing algorithm for suspected Lyme disease, are included in the Tickborne Diseases topic discussion on ARUP Consult.

The topic discussion includes situations in which tickborne diseases may be diagnosed with clinical evaluation alone (e.g., with the presence of the characteristic “bull’s eye” rash associated with Lyme disease), when laboratory tests should be performed, and other clinical factors such as time since symptom onset or disease history that may affect test selection.

ARUP Consult is a web-based laboratory test selection tool that provides point-of-care diagnostic and interpretive information to clinicians. A free educational resource, it is funded entirely by ARUP Laboratories, a national clinical and anatomic pathology reference laboratory and a nonprofit enterprise of the University of Utah Department of Pathology.

Users may subscribe to receive the monthly ARUP Consult Newsletter. The Consult team also welcomes feedback and suggestions at arupconsult@aruplab.com, or suggestions can be submitted via the Feedback button that appears on any arupconsult.com page.