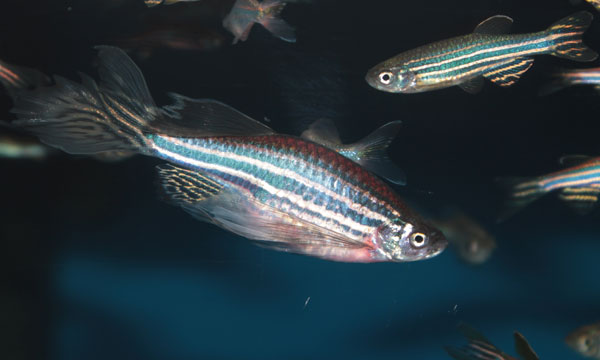 You may have seen zebrafish in aquariums: small, striped, darting fish, originally found in slow streams and rice paddies in the Indian subcontinent. Did you know they’re also our virtual cousins? That is, these fish are rockstars of vertebrate scientific research—because 70 percent of their genes are related to similar genes in humans, and 80 percent of the disease-causing genes in humans have at least one related gene in zebrafish.

That connection became evident to Kimberley Evason, MD, PhD, while she was looking closely at the complex progression of liver cancer and liver disease as a postdoctoral fellow in 2010 at the University of California, San Francisco (UCSF)—and working for the first time with zebrafish.

The striped fish have been used in research since the 1970s, but are still less common in labs than mice. As vertebrates, fish develop organs in the same way that others (chickens, furry mammals, humans) in that group do: starting as curled fetus-shapes with a backbone. But zebrafish are the speediest: they develop their organs within two days, in clear bodies that allow scientists to observe development as it happens. That’s handy enough that the National Institutes of Health, in Bethesda, Maryland, has a 10,000-square foot zebrafish research facility and released a 2012 video called, Zebrafish—a Key to Understanding Human Development.

Evason’s work focuses on liver cancer because that condition, still poorly understood, is increasing at the highest rate of all cancers—as noted in the March 2016 Annual Report to the Nation on the Status of Cancer, 1975–2012, based on data from the Centers for Disease Control and Prevention (CDC) and other institutions.

“Liver cancer is a very deadly cancer and difficult to treat, partly because the tumors are very genetically complex,” Evason says. “There’s also little effective treatment for advanced stages, which is when most of these tumors are first detected.”

Zebrafish are the system Evason is using to study this cancer, and she says it has advantages over studying cultured cells (cells taken from human tumors years ago, which continue propagating in Petri dishes). For one thing, when scientists study animal models—even fish—they’re looking not at isolated tumor cells but at growth within a whole animal, including blood vessels, immune cells, and other non-tumor tissues, which more closely recapitulates what would happen in a human, she notes.

Continued research might help her and other researchers ramp up treatment for the main risk group for liver cancer—in particular, for hepatocellular carcinoma (HCC), a primary malignancy of the liver. That risk group is people with a history of chronic hepatitis B or C, heavy alcohol use, and/or non-alcoholic fatty liver disease. With zebrafish, she can watch development in translucent embryos and larvae, and note any developing tumor because of abdominal enlargement, then confirm it by histology—the microscopic study of tissues.

“If we could develop blood tests to identify tumors before they are detected by routine imaging, we would have more options for treating liver cancer and a better chance of curing patients.”


The research is also less expensive than mouse work, in part because zebrafish reproduce quickly: 200–300 larvae a week from one mother fish. After arriving at ARUP Laboratories (where she is a medical director in anatomic pathology) and the University of Utah and Huntsman Cancer Institute in January 2016, Evason continued and expanded her work in HCC.

Evason has been named to the medical advisory board of the International Zebrafish Society (IZFS), joining 11 other physician-scientists from institutions such as Harvard, Columbia, University of Pennsylvania, and others in Australia and Canada. Amnon Schlegel, MD, PhD, University of Utah School of Medicine, will also join the board. The organization is a gathering of faculty members from around the world who use zebrafish as a major part of their scientific research. On the board, Evason’s work will include increasing education demonstrations of zebrafish in classrooms, particularly in schools that lack strong science programs. IZFS members will take demonstration modules of zebrafish studies into schools to teach genetics and scientific methods.

Evason is excited about opportunities to work on tests to recognize HCC in its early stages. She and two other ARUP researchers, Mary Bronner, MD, and Sabine Hellwig, PhD, are engaged in the process of developing an assay for detecting HCC.

“Having the opportunity to work on tests to address the rising rates of HCC is a real plus,” says Evason, who was drawn to the collaboration between ARUP and the University of Utah. “If we could develop blood tests to identify tumors before they are detected by routine imaging, we would have more options for treating HCC and a better chance of curing patients.”