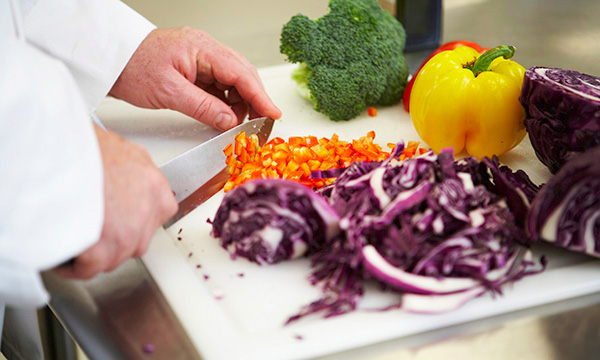 Chipotle is in the midst of a restaurant’s nightmare, as it contends with the consequences of three major foodborne outbreaks this past year involving the pathogens Salmonella, E. coli, and norovirus.

However, many foodborne illnesses happen right at home, literally right under your nose. While under the right circumstances most anything can give you food poisoning, certain foods and conditions in your kitchen can galvanize the culprits. Bacteria-related food poisoning is the most prevalent, although fewer than 20 of the thousands of different bacteria are actual instigators.

He also happens to love cooking.

So how does this gastroenteritis detective keep pathogens out of his food?

In order to prevent cross-contamination (e.g., the lettuce touching the raw chicken), Couturier maintains two separate working areas in the kitchen, one for meat and one for produce.

“I have an island where I prepare all things meat. The counter top near one side of the sink is where I prep veggies. The two areas never touch. The meat is never near the sink and it goes straight to the oven or grill from the island. Knives and cutting boards go straight into the other sink with hot water and soap.”

Cross-contamination happens when people handle raw meat, don’t wash their hands, and then punch buttons on a microwave, open the fridge door, or turn on the sink tap (Couturier uses his elbow). Some people will use one hand for prep, while keeping the other clean.

These organisms thrive and grow in temperatures ranging between 40 and 140 degrees Fahrenheit. Raw and cooked foods should not be in this temperature range any longer than absolutely necessary (see sidebar for tips).

Segregating your meat and produce area is one way to minimize cross-contamination; another step you can take is to not allow food to sit out in room temperatures. “After the food is cooked, if it sits out for extended periods, contaminating bacteria can produce toxins. It is these toxins that make you sick, not the bacteria per se,” explains Couturier.

Some foods, like rice, can “sprout” harmful bacteria. Uncooked rice can contain spores of Bacillus cereus, a bacterium that can cause food poisoning. When the rice is cooked, the spores can survive and if the rice is left standing at room temperature, the spores can grow into bacteria.

True or false: vegetarians or vegans are more protected from food poisoning?

False. Most shigatoxin producing E. coli (STEC) outbreaks are related to raw produce, not meat. Produce in general can pick up STEC due to fecal contaminates in the soil, fertilizer, or contaminated irrigation water. Experts agree that washing fruit and vegetables is a good practice; however there is really no strong evidence that washing produce at home can eliminate the risk of ingesting foodborne pathogens.  Produce sprays were popular in the1990s for at home produce “cleansing” but they were shown to be ineffective, or no more effective than washing produce.

If doctors don’t know what is causing gastrointestinal symptoms, instead of ordering one test at a time looking for specific culprits, they can run just one test that looks for 15 of the most common causes using PCR technology.

Couturier recalls outbreaks involving unpasteurized juices stemming from the raw drink movement several years ago. One company, which was using unpasteurized apple juice, was using apples picked up from the ground or “drops” (this is a common source of fruit for pasteurized juice products and cider since they do not have the unblemished appeal to be sold in the grocery stores). It was hypothesized that the apples had fallen in an area contaminated by cow feces possibly used as fertilizer. “Cows carry STEC in their bowel as part of their normal flora, which will make us quite sick, but not them,” says Couturier.

Meat can pick up similar contaminants, but cooking generally kills them. However, Couturier cautions that it will only kill the contaminants on meat where it comes directly in contact with a high-heat surface. For meats that have been exposed to contaminants in a slaughter house and then ground, the interior may remain contaminated.

Many foodborne illnesses take days or weeks to manifest. Cyclospora (a parasite), often transported via produce, cannot affect you until it matures. It can survive even when refrigerated. “It’s a cyst that sits there in this infectious state, just waiting for someone to eat it,” says Couturier, who suggests the best defense is to purchase produce that is domestically or locally farmed, since this parasite is only endemic in the tropical and subtropical areas of the world. The previous four outbreaks between 2013 and 2015 were traced to produce grown in Mexico.

Two-thirds of what causes food poisoning can be determined using a relatively new testing method known as PCR (polymerase chain reaction) technology. If doctors don’t know what is causing gastrointestinal symptoms, instead of ordering one test at a time looking for specific culprits, they can run just one test that looks for 15 of the most common causes using PCR technology.

Traditionally, a culture was done to identify the cause of an illness, but a culture can take up to four days to grow. With PCR, test results are available in a day and are more accurate. Couturier still uses a microscope to spot pathogens, for example tapeworms, roundworms, and flatworms.

A general rule of thumb for figuring out the source of the vomiting, diarrhea, and stomach cramps: