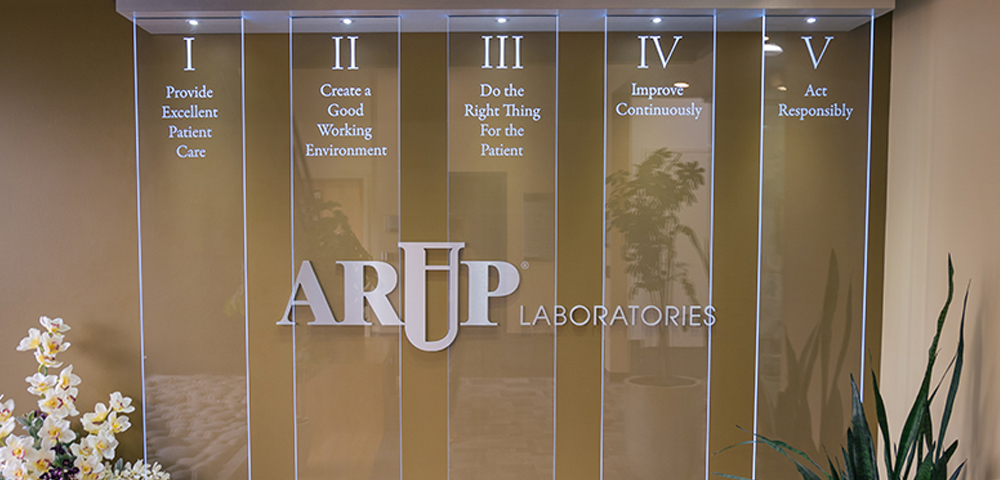 When Ethics Is the Business Strategy

ARUP Leads a Growing Number of Companies That Are Building Their Strategies Around Core Values.

In healthcare, we take our altruistic motives for granted. “First, do no harm” is our mantra. We put the patient first.

Yet even the most committed and selfless among us recognizes some naiveté in that assumption. In this era of consolidation aimed at cutting costs and improving efficiency, a profit motive that too often translates to price gouging and limitations on service can put healthcare businesses at odds with medical and scientific ethics.

It doesn’t have to be that way, though. In fact, it can’t be that way if the goal is success for the long term, according to Brian Jackson, MD, MS, ARUP medical director of business development, information technology (IT), and support services. He believes healthcare in general and the diagnostics industry in particular can build on principles ARUP views as central to its business strategy to make money while also staying true to healthcare’s core values.

“So much of modern business gets distracted by value extraction, which is an unsustainable goal,” said Jackson, who lectures on the topic of ethics as a business strategy at ARUP and to lab industry groups. “But if we focus on value creation instead, it brings us back to our clinical and scientific roots.”

Make no mistake—money matters to laboratories, as it does to all businesses.

“The brilliance of the Five Pillars is that they distill core values that make sense from a business and an ethical perspective. We filter every decision we make through the Five Pillars, and if it goes against one or more of them, we seriously look at what that decision entails and whether it’s the right decision.”
Dr. Sherrie Perkins, ARUP CEO

Jackson, though, believes laboratories can produce gains for owners or investors while also satisfying the needs of patients, clients, employees, suppliers, regulators, and even the communities in which they reside. He is a proponent of stakeholder capitalism, which asserts that no company can thrive into the future without the active engagement of all involved. It calls on businesses to actively pursue moneymaking opportunities while also actively practicing ethics, and not to treat one as a tradeoff for the other.

“We sometimes hear companies say they’re giving up being as successful as they could be because they want to do the right thing, but they shouldn’t view it like that,” Jackson said. “Doing the right thing can be the centerpiece of your strategy.”

More companies across industries, from Dignity Health to Nike to hedge funds manager BlackRock, are embracing the notion that answering to a higher purpose creates business value.

“Profits are in no way inconsistent with purpose—in fact, profits and purpose are inextricably linked,” Blackrock chairman and CEO Larry Fink wrote in this year’s letter to shareholders. “Profits are essential if a company is to effectively serve all of its stakeholders over time—not only shareholders, but also employees, customers, and communities.”

“There is a large body of evidence that if we do the best we can to deliver to a variety of stakeholders in a fair and just manner, with transparency, integrity, and honesty, then the bottom line ends up healthy as well,” said Abe Bakhsheshy, PhD, a professor of organizational behavior at the University of Utah’s David Eccles School of Business.

ARUP’s founders understood this, and the company has benefitted from the University of Utah’s commitment to manage ARUP for the future, Jackson said. “It is an important part of the ARUP story,” he added. “Our leadership [both internally and at the U of U] has always been driven by medical values. They’ve managed for the long-term, not short-term, financial targets.”

It Can’t Be All Talk and No Action

“There is a large body of evidence that if we do the best we can to deliver to a variety of stakeholders in a fair and just manner, with transparency, integrity, and honesty, then the bottom line ends up healthy as well.”
Dr. Abe Bakhsheshy, University of Utah

ARUP first articulated its core values in writing as part of the strategic planning that led to its expansion in the early 1980s and eventual evolution into a nationwide reference lab, said Ronald Weiss, MD, a retired professor and staff hematopathologist who was the company’s president and chief operating officer from 2003 to 2009.

Weiss was among leaders who later translated ARUP’s vision and mission statements into the Five Pillars, which he described as an effort to crystalize and codify ARUP’s culture into bullet points that people could recognize in what they were doing and use as a guidepost. Those bullet points include:

“The brilliance of the Five Pillars is that they distill core values that make sense from a business and an ethical perspective,” said ARUP CEO Sherrie Perkins, MD, PhD. “We filter every decision we make through the Five Pillars, and if it goes against one or more of them, we seriously look at what that decision entails and whether it’s the right decision.”

Weiss added that competitors sometimes seek to gain a quicker, stronger position by trying to “do well while leaving the good to someone else.” At times, it makes things difficult, but as Weiss said, “We always come back to this belief that as long as we act in the interests of patients and employees, continue to improve ourselves individually and as an organization, and we’re fiscally responsible, that is still a formula for success.”

It can’t be all talk and no action.

Bakhsheshy used the example of Enron Corp. to assert that companies must demonstrate they do more than talk about values. Enron developed a 45-page code of conduct that it clearly ignored before spiraling into the most costly corporate bankruptcy in U.S. history amid widespread corruption and accounting fraud.

Enron CEO Jeffrey Skilling left the impression he was doing God’s work, Bakhsheshy said. “Enron wanted everyone to believe it was on the side of the angels, but which angel were they talking about? Lucifer?”

It’s hard not to be cynical when you recall such examples, Jackson said, but he emphasized that values articulated in internal codes of ethics such as the Five Pillars can translate into action in numerous ways.

In the diagnostics industry, labs that value transparency make certain they validate new tests and verify their clinical utility before marketing them aggressively, he said. They ask whether the way they manage patents unjustly limits patients’ and scientists’ access to advancements in healthcare.

“We sometimes hear companies say they’re giving up being as successful as they could be because they want to do the right thing, but they shouldn’t view it like that. Doing the right thing can be the centerpiece of your strategy.”
Dr. Brian Jackson, ARUP

They also seek transparency from suppliers. How do reagent vendors treat lot-to-lot variation, for example? Do other suppliers care about and take action to support environmental sustainability?

“There’s so much consolidation going on that some healthcare organizations are huge, giving them enormous purchasing power,” Jackson said. “They can use that purchasing power to influence the behavior of their suppliers.”

Labs with medical and scientific ethics at their core work to strengthen accreditation systems, he said. They recognize that regulation that seeks to require accreditation and transparency can complement voluntary efforts toward improvement.

In short, they practice good medicine by putting the patient first.

Whoa. How Does This Work?

Julie Altwies, chief business development officer, recalls an experience that impressed her when she first joined ARUP in 2010.

She remembers visiting a client, and listening as the account executive (AE) recommended that the client either insource vitamin D testing, which generated significant revenue for ARUP, or consider having clinicians put patients on vitamin D supplements without testing them at all. Why? Such testing, if deemed necessary, is more cost-effective and results are more timely when performed closer to the patient.

“I remember walking out of there and thinking to myself, ‘Whoa. How does this work?’” Altwies said. “But it does work. We lost vitamin D testing revenue, but we solidified a relationship. There were other esoteric tests the client needed.

“If we do the right thing, there will always be a need for the type of medicine we practice,” she said. “Part of that is keeping the interests of health systems first, and filling the niche for those esoteric tests they can’t do.”

Jackson added that satisfying the needs of patients and all other stakeholders takes continuous effort, especially as companies grow. It requires vigilance and a recognition that no company will be perfect every day.

“If you want to excel, you must always go back to your roots and remember who your primary stakeholders are,” Bakhsheshy said, and Weiss agreed.

“You have to step back every once in a while to assess whether your values have changed, and whether they’ve changed consciously or they’ve evolved unconsciously and you’re no longer happy with where you’ve gotten to,” he said.

Perkins is confident in the Five Pillars’ staying power. “Even as our culture evolves a little, it still has a basis that remains very true to itself,” she said.

Jackson emphasized that ARUP’s Five Pillars work because the company’s many stakeholders are well represented by them.

“They articulate a firmly held belief that good business and good ethics are compatible,” he said. “You can build ethics into your business strategy, and it only strengthens your success over the long term.”