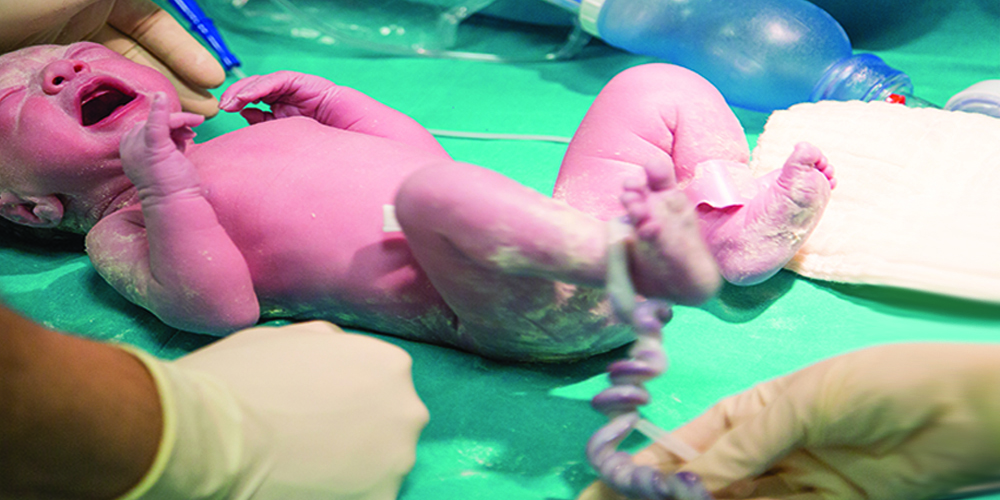 Why Are Some Hospitals Moving Toward Universal Cord Collection?

At the University of Utah Hospital, moments after a baby comes into the world, a nurse quickly snips 8 inches off the umbilical cord. That portion of the cord is then labeled and stored in a designated refrigerator for one to two weeks. If the baby begins to show symptoms of drug withdrawal in the hours and days after birth, the preserved cord tissue could hold the key to the baby’s treatment.

“If we have reason to suspect a baby was exposed to drugs in utero, then we will send the cord in for testing. Sometimes we may take cord tissue from a baby we don’t realize is at risk and then discover during the hospital stay that mom used drugs during pregnancy that may affect the baby after delivery,” said Julie Shakib, DO, MS, MPH, medical director of the U of U Hospital Well Baby and Intermediate Nurseries.

While meconium (the baby’s first stool) has traditionally been the sample of choice to test for in utero drug exposure, successful cord tissue testing is convincing more and more clinicians to snip and store. The simple fact is that it’s convenient. Every baby arrives with a cord attached, there’s plenty of specimen available, and cord storage can be done as a matter of policy, not judgment. No bias enters the equation if nursing staff automatically takes tissue from each baby’s cord.

Meconium can be difficult to collect. The baby may pass it in utero, as happens in 10 percent of cases. It may be thrown away, sometimes purposely by a mother or family member who fears drug detection. For busy nurses, the logistics of checking every diaper can be tricky. For all these reasons, more health systems are choosing to collect cord tissue instead of meconium.

“There is a push for universal cord collection—it’s a very practical way to go,” said Gwen McMillin, PhD, ARUP medical director of toxicology and pharmacogenetics. She pointed out that while both meconium and cord tissue testing volumes continue to increase at ARUP, the number of cord samples has grown at a faster rate. “We are now doing about equal amounts of cord and meconium testing.”

Identifying the Babies Most at Risk

“Often, we are aware of maternal drug use in advance [of childbirth],” said Shakib. “However, we are working on improving our screening efforts for both moms and babies in order to identify those babies at risk who otherwise would be missed.” Signs that the mother may be using drugs include unexplained premature labor, a placental abruption, previous children in the foster care system, and little or no prenatal care, among other risk factors.

Opioid use during pregnancy commonly causes newborns to suffer withdrawal symptoms. If a mother has a history of opioid use during pregnancy, cord tissue will often be tested even before the infant begins to show withdrawal symptoms. Sometimes a discharged newborn ends up in the emergency room, at which point the cord tissue may be sent out for testing.

Just 8 inches of a newborn’s umbilical cord provides ample tissue to test whether the infant was exposed to drugs in utero. Because drug residue is deposited consistently along the length of the cord, the Wharton jelly inside the cord can be tested at national reference laboratories such as ARUP.

Shakib and her colleagues have instituted a neonatal opioid withdrawal syndrome (NOWS) care-process model at the U of U Hospital to monitor and improve quality of care for newborns with NOWS. The process of caring for these babies involves a standardized scoring system for withdrawal and an algorithm to determine the most appropriate drugs and dosages to slowly wean babies from the opioids to which they were exposed in utero. While babies with NOWS can spend up to three weeks in the hospital, this standardized approach has been shown to reduce their length of stay, according to Shakib.

NOWS rates have increased dramatically in the United States. A 2016 report from the Centers for Disease Control and Prevention (CDC) estimated that about 24,000 drugdependent babies were born in 2013, the last year with complete statistics. That is one baby every 20 minutes.

Women receive more opioid prescriptions than men, and according to the National Survey on Drug Use and Health, heroin use increased 100 percent among women from 2002–2013, compared with a 50 percent increase among men over the same period.

In infants, NOWS symptoms include tremors, respiratory issues, excessive crying, sleep and feeding issues, seizures, vomiting and diarrhea, and fever, among other ailments. Symptoms will vary depending on whether the infant was exposed to stimulants or depressants, and treatment varies as well.

ARUP was the second laboratory in the country to begin offering cord testing (starting in 2012) and continues to hone its expertise in this area. ARUP can now detect 46 drugs or drug metabolites in cord tissue, and most recently added gabapentin to the list. The most common drug ARUP’s laboratorians identify is marijuana; the second most common class is opioids. Often there is a mix of illicit and prescription drugs.

“It’s an area of testing that is evolving, and we are constantly learning more and improving,” said McMillin, who is also a professor of pathology at the U of U School of Medicine. She pointed out that while both meconium and cord specimens are reliable for detecting drugs used in the last trimester of pregnancy, some drugs are better detected in one specimen than the other. However, the availability of the cord is perhaps the biggest advantage of using cord tissue over meconium for testing.

“There are fewer logistics,” explained McMillin. “You only need one collector, to collect once, and turnaround time is quicker since it can be promptly sent to the lab.” Cord collection also decreases the likelihood of labeling and handling mistakes because it happens in the delivery room. With meconium, there are potentially many collections being performed for children in a nursery or neonatal intensive care unit. A meconium specimen can also be incomplete or lost if a baby is transferred to another hospital, as commonly happens in rural areas. Multiple births can add to the confusion.

“With cord tissue screening, there is no missing piece. It’s just more of a streamlined and reliable collection process for us,” said Shannon Miles, BSN, RNC-MNN, who manages Perinatal Outreach & Ambulatory Services at Centra Healthcare in Lynchburg, Virginia. She recalled a time when the results from cord tissue testing proved that a new mother had successfully undergone treatment for addiction, which allowed her to keep custody of her child. “These cord screens are definitive and hold up in court.”

For women already in labor on arrival, undergoing a cesarean delivery, or experiencing a placental abruption, urine or meconium collection may not be an option. “Sometimes that cord is the only thing we have to help us understand how to treat that baby,” added Miles.

In the University of Utah Hospital Intermediate Care Nursery, it is quiet. There are no beeping machines and the lighting is muted. The medical team tries to perform all care duties within the same window of time so babies can rest and are not overstimulated. This nursery cares for babies who need oxygen support or fluids, or who are at risk of drug withdrawal.

Ideally, when the babies are not in this nursery, they are with their mothers. U of U Hospital is piloting a rooming-in program for mothers with opioid use disorders and their babies. Roomingin helps the mother bond with her new baby while nurses and medical staff identify and treat neonatal opioid withdrawal syndrome (NOWS).

“We teach mom that swaddling the baby, lots of holding, and keeping a quiet environment helps the baby transition,” said Marcela Smid, MD, MA, MS. Smid is clinical director of the SUPeRAD (Substance Use and Pregnancy—Recovery, Addiction, Dependence) Clinic, a prenatal clinic for pregnant and postpartum women with substance use disorders. The type of care she describes, known as kangaroo care, has been shown to increase bonding between mothers and babies and may prevent the development of withdrawal symptoms or at least lessen their severity, decreasing the need for withdrawal drugs.

“Mom and other family members at the hospital are receiving a lot of interaction around education and support,” added Smid, who is also an assistant professor in the Division of Maternal Fetal Medicine at U of U Health.

Smid explained that many of these mothers take methadone or buprenorphine to treat their opioid use disorders, and it is expected that about half of the babies exposed to these medications will develop NOWS and require treatment. “Successful treatment of the mom’s opioid use disorder is the most important thing for both mom and her baby’s health.”

Pregnancy is a unique opportunity to identify and manage drug issues. For some mothers, pregnancy may be the only time they seek medical care and are forthcoming about drug use or addiction. “For these mothers, it can be a very emotional time, and they are full of worry for their new baby. Often, they are very receptive to the support and attention that is being offered,” said Smid.

Many women affected by substance use disorders are in their childbearing years. According to the American College of Obstetrics and Gynecology, more than 86 percent of pregnancies conceived by women with opioid disorders are unplanned.

“For these mothers, it can be a very emotional time, and they are full of worry for their new baby. Often, they are very receptive to the support and attention that is being offered.”
Dr. Marcela Smid, University of Utah Health

For medical providers, establishing a relationship with the mother, creating a follow-up plan, and connecting the family with support measures after discharge is critical for the health of the child. The environment in which the child is raised can have long-term behavioral and developmental impact. This is why treatment of the mother’s addiction is so important.

“Many of these women have experienced withdrawal themselves and don’t want their babies to go through this,” said Julie Shakib, DO, MS, MPH, who oversees the U of U's Well Baby and Intermediate Nurseries. “They want their babies to have happy, successful lives. So most moms work with us to help their child.”