When global testing supply shortages halted diagnostic testing early in the COVID-19 pandemic, ARUP drew on reserves that have never been in short supply: the imagination and innovation of its medical laboratory scientists.

Immediately, they began efforts to replace the viral transport media vital to each specimen collection kit needed for COVID-19 testing. Copan Group, based in Italy, was the primary supplier of media to customers worldwide, and when it couldn’t deliver, ARUP’s Reagent Lab collaborated with Research and Development (R&D) to formulate ARUP Transport Media (ATM)™ as an alternative.

Today, ATM is used in specimen collection kits for all viral testing performed at ARUP. Each week, ARUP produces 40,000 kits containing the media to ship to hospital and health system clients nationwide. “ATM has given us some independence that benefits clients and patient care,” said Lincoln Hirayama, manufacturing group manager in the Reagent Lab.

Before ATM, the Reagent Lab typically made some basic supplies for clients, such as cytogenetic tissue media. When the pandemic hit, though, it became apparent that ARUP would need to explore every option to bolster supplies.

ARUP scientists used information in the public domain about the media’s components to formulate an alternative to Copan’s product, and their research and experimentation led to the development of ATM. ARUP began manufacturing the media for use by its own clients, and it also published the formula so that others could use it.

“In the beginning, from March through July 2020, we modified a lab space to fit as many people as possible to hand assemble kits,” Hirayama said. “Over time, we evolved from a rudimentary hand-loading of plastic bags to operating an assembly line.”

Beyond alleviating a supply shortage, ATM has other benefits, said Adam Barker, PhD, director of the ARUP Institute for Clinical and Experimental Pathology® (R&D).

ATM maintains specimen viability for up to five days and does not require refrigeration, an improvement over the media it has replaced. It is also less expensive. Each kit containing ATM costs ARUP only 15 cents to produce. Hirayama and Barker said the multiple benefits of creating ATM and assembling collection kits in-house led their teams to discuss what else ARUP can and should manufacture.

Before considering making an item in-house, the Reagent Lab compares external and internal costs. It also looks at material availability; items are considered not viable to produce in-house if the raw materials are monopolized by vendors. The team also calculates the volume requirements to ensure that ARUP can handle potential peak demand.

“COVID-19 taught us to look at everything that is purchased as an opportunity to save money, protect and shorten supply chains, and break down barriers of what can and can’t be done in-house,” Barker said. 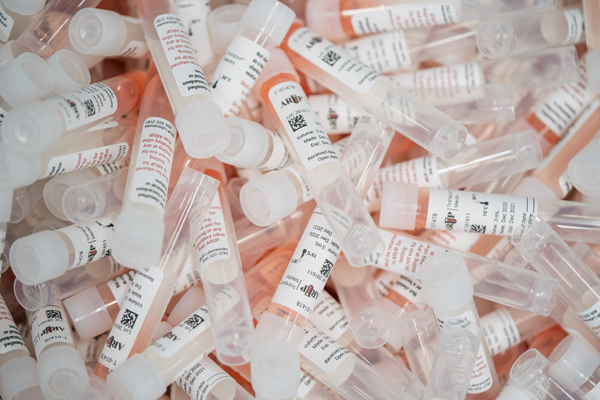 When supplies of a critical component of kits used to collect specimens for COVID-19 testing suddenly grew scarce this past spring, scientists at ARUP Laboratories worked to formulate an alternative so that more of the vital kits could be created... Continue reading