New CEO Brings Experience at All Levels of ARUP’s Business

Andy Theurer will never forget the advice his first boss gave him shortly after he joined ARUP in 1991.

“She took me aside and said, ‘Look, at other companies, finance is king. Finance rules. But you need to understand that at ARUP, finance is important, but it isn’t king. We’re all about getting patients the care they need through lab testing. Finance exists to support that.’”

He remembers being a little shocked. “I thought, ‘Wait a minute, usually finance has a lot to say and for a darn good reason,’” said Theurer, who has been ARUP’s president since 2017 and will become the company’s CEO on July 1, 2021. He quickly learned the benefits of ARUP’s approach, however, and he embraced it. Theurer found himself repeating the advice to new hires who followed him.

“Without money—without margin—you don’t have a mission, but at ARUP the money is an outcome, not a purpose,” he said. “The best part about this is that our model works.”

More than 30 years after Theurer first received that advice, no one knows and understands the relationship between ARUP’s business and its mission better than he does, said CEO Sherrie L. Perkins, MD, PhD, whom Theurer will replace when she retires on June 30, 2021. Perkins has also spent more than 30 years at the company.

As he ascended as a manager and a leader, Theurer became ARUP’s primary financial and business strategist, helping ARUP as a nonprofit enterprise of the University of Utah (the U) to achieve stability and later, impressive growth, including record-setting revenue and earnings during a global pandemic.

“In Andy I recognize a deep regard for all that ARUP represents. He cares deeply about how well we perform as a business, as well as how we stay true to our patient and academic mission. He embraces being a part of a team that works toward those ends,” Perkins said. “I have all the faith in the world in him.”

Ambition Beyond the Books

Theurer is a certified public accountant (CPA) who began his career as a staff consultant at the then-Big Eight accounting firm of Deloitte, Haskins, and Sells immediately after graduating from the U in 1987. He spent two years with the firm, primarily doing auditing and tax work. That was just enough time for him to realize that he wanted to be more directly involved in business.

“As much as I love accounting, I didn’t love going in after the fact as an auditor,” he said. “The auditor is the guy who goes in after the battle and bayonets all the wounded. I wanted to be there, in the battle, with the business.”

That realization led him to a job at Price Savers Wholesale Inc., a Costco-like membership warehouse club with headquarters in Salt Lake City at the time. While there, he first experienced something that he would later work to replicate for ARUP employees. “I felt that I was part of something bigger than myself and realized that I thrived when I knew I had played a part in the company’s success.”

Theurer said Price Savers was so well run that PACE, a Kmart subsidiary that acquired the company in 1991, hired its CEO to manage all of the PACE membership warehouses nationwide after the acquisition. Then when Sam’s Club later acquired PACE, that same CEO from Utah went on to a top leadership position at Sam’s. “I learned an incredible amount there from an amazing management team,” Theurer said.

He wanted to remain in Utah after PACE acquired Price Savers, however. That’s how he ended up at ARUP.

From CPA to Key Business Strategist

Theurer’s father was a physician, and he had always been interested in medicine, so he was intrigued when a friend told him about an opening for an assistant controller at a fledgling company in Research Park at the U. It took only a few interviews with his future teammates to convince him that he wanted to work at ARUP. “I was fortunate enough to win that job and I just never really looked back.”

At ARUP, Theurer found the opportunity to be very directly involved in the business, and to learn and grow with the company. He worked hard and advanced quickly, becoming director of accounting after just two years at ARUP. He was named acting controller in 1995, then controller in 1996. In 1999, Theurer added vice president and director of facilities to his controller title. In 2000, he became senior vice president and chief financial officer (CFO), a position he held for nearly 20 years before he was appointed in 2017 to be ARUP’s president.

His contributions along the way have been numerous.

In addition to overseeing all budget planning, financial reporting, audits, cash management, and communication about corporate financial issues, Theurer has been the primary architect of ARUP’s expansion over time to become the company with the largest physical presence in Research Park. He negotiated every major real estate deal, notably the purchase of four buildings in recent years so that ARUP now owns all of its Research Park facilities. The company’s holdings include the newly constructed, 220,000-square-foot, state-of-the-art laboratory facility that has brought ARUP’s footprint in the park to more than 750,000 square feet.

For the past 20-plus years, Theurer also has built trust and confidence in ARUP leadership with the Board of Directors and with U officials, who at a point early in his tenure as CFO considered selling the company. That deal would have resulted in a large windfall for the U and for ARUP executives, who stood to receive 10% of what the potential buyers promised to pay for ARUP. Theurer, however, believed the offer significantly undervalued ARUP and also feared it would eventually result in significant job losses and compromised patient care. He worked tirelessly to convince the board and U leaders to reject the deal, and ARUP executives unilaterally joined him in agreeing to forego significant personal gain to protect ARUP from acquisition.

“That is when I knew I was part of something so much bigger than myself,” Theurer said. “I was and continue to be so proud to be part of ARUP.”

“Andy has worked with our Executive Committee time and again to demonstrate that ARUP could be well managed and continue to generate generous dividends for the university while maintaining its commitment to academic medicine and the best patient care,” Perkins said. “He has been integral to why ARUP is successful and will continue to be successful in the future.”

Theurer’s ascension to ARUP’s presidency coincided with Perkins’ appointment as CEO. Perkins said she agreed to take the job in 2017 with the caveat that Theurer would also be promoted to lend his business expertise to top leadership. Together, as a team, they worked to stabilize the company following a two-year period during which ARUP had multiple CEOs after the departure in 2015 of Ed Ashwood. Theurer and Perkins restructured and strengthened ARUP’s Executive Committee and engaged in aggressive succession planning. They bolstered information technology and reactivated plans for the new building that both saw as vital to ARUP’s growth. They led the company through the global COVID-19 pandemic.

Now, as Theurer moves into ARUP’s top leadership position, he sees opportunity to work with newly appointed President and Chief Medical Officer Tracy I. George, MD, to further strengthen the foundation he and Perkins fortified. He said he will focus on innovation and investment, engaging medical directors to ensure that ARUP meets clients’ current and future testing needs while also offering significant value beyond the test. Theurer also sees opportunity in further automating processes wherever possible to continue to increase the efficiency with which ARUP performs tests sent by hospital and health-system clients from around the country.

“ARUP’s future is bright, and I couldn’t be more pleased to have the opportunity as CEO to continue to make a difference,” Theurer said.

Peter Jensen, MD, chairman of ARUP’s Board of Directors and of the U Department of Pathology, said board members felt fortunate to have exceptional candidates to replace Perkins and to move into the president’s role. He said Theurer understands and appreciates ARUP’s unique challenges and opportunities, and the board believes he will work with George as he has with Perkins to balance the goal to grow the business with the goal to continue to advance academic laboratory medicine.

“ARUP’s culture is our best asset. In Andy, we will have a strong leader who is committed to the company’s success from a business perspective and who is also passionate about our commitment to patient care,” Jensen said. “We are very well positioned for continued success.”

Without money—without margin—you don’t have a mission, but at ARUP the money is an outcome, not a purpose. The best part about this is that our model works.”

30-Plus Years at ARUP 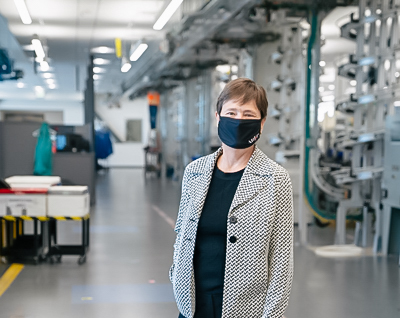 ARUP Laboratories CEO Sherrie L. Perkins, MD, PhD, is not the first pathologist to recognize that revealing the story told by a pattern of cells viewed through a microscope is something like unraveling the secrets of a treasured work of art...Continue reading 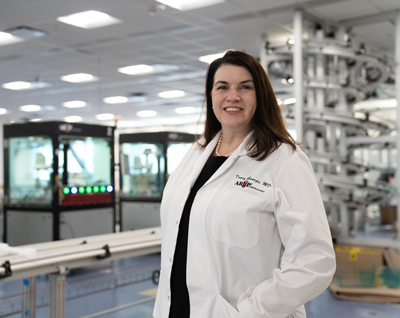 ARUP’s New President: ‘I’ve Won the Lottery by Being at ARUP’

Most people can recall a few defining moments in their careers, milestones or accomplishments that serve always to remind them, “This is what I do. This is who I am.”.... Continue reading