At this point in the COVID-19 pandemic, regardless of which combination of vaccinated, boosted, and/or naturally infected we claim, all of us who have developed antibodies against SARS-CoV-2 have the same questions: Are we immune to infection, and if so, how long will that immunity last?

Scientists have been seeking answers to these questions since the first cases of COVID-19 were observed in December 2019, and they know far more than they did three years ago. Perhaps even more importantly, their pursuit of knowledge about immunity to SARS-CoV-2 has led to novel approaches to testing that promise to improve diagnosis and monitoring of not only COVID-19, but many other diseases in the future.

That’s certainly true of research at ARUP Laboratories and the University of Utah, said Julio Delgado, MD, MS, an immunologist who is ARUP's executive vice president and chief of the Clinical Pathology Division at the U. “We see potential benefits beyond COVID-19 for every advancement born of the pandemic,” he said. “That may be one upside of what we’ve all been through the past few years.”

Immunoglobulin G (IgG) antibodies are proteins that bind to and neutralize the virus so that it cannot invade cells and enable the infection to spread. ARUP’s COVID-19 IgG, Qualitative by CIA test detects IgG antibodies against the nucleocapsid protein of SARS-CoV-2 that develop in response to natural infection, and the COVID-19 IgG (Spike) Semi-Quantitative by CIA test detects IgG antibodies against the spike protein (S1) of SARS-CoV-2. These tests are considered standard for determining whether an individual has had COVID-19, but are not useful for determining immunity to the disease.

So how do we test for immunity?

There is no easy answer, but research at ARUP and the U has helped us get closer to understanding what constitutes protection against the disease.

The lab run by Shawn Owen, PhD, an associate professor in Molecular Pharmaceutics at the U, may at first seem to be an unlikely source of a novel SARS-CoV-2 antibody test, but Owen says it made sense for him to work with former postdoctoral fellow Sun Jin Kim, PhD, who is now at the University of California, San Francisco, to apply a system they were developing to measure levels of therapeutics for use in the detection of SARS-CoV-2 neutralizing antibodies.

“When COVID-19 hit, the only people the U was allowing to be in person in labs were those who were working on COVID research, so we brainstormed an idea that would help get us back in our lab,” Owen said.

In essence, Owen’s lab uses antibodies as tools, taking an approach that relies on what he refers to as a “protein switch.” He and his colleagues saw a way to use the switch to detect the presence of SARS-CoV-2 neutralizing antibodies, which are correlated with protective immunity. Standard IgG antibody tests typically do not measure neutralization efficacy specifically.

Owen said other neutralizing antibody tests exist, but he, Kim, and others in Owen’s lab joined with a team of researchers at the University of Toronto led by Igor Stagljar, PhD, to develop a test that they say can be performed more quickly and inexpensively. An added boon is the test’s versatility. “Where our test is really empowering is that it is modular and can be easily adapted for new SARS-CoV-2 variants as they emerge,” he said.

Their test, Neu-SATiN, is performed on serum or plasma and is powered by a luciferase protein that is converted into a protein “switch.”

The animation on the left demonstrates how Neu-SATiN works to detect whether neutralizing antibodies are present by measuring the ability of the SARS-CoV-2 spike protein to associate with the angiotensin-converting enzyme 2 (ACE2) receptor to penetrate the wall of a healthy cell.

When neutralizing antibodies are present, however, they bind to the spike protein and prevent it from associating with the ACE2 receptor, so the luciferase fragments remain separated, and the light signal measured by the instrument is weaker.

Owen said the assay’s components can be easily modified and produced, so it can be adapted for differences in the spike protein of a new variant, for example.

“For a test to be useful in helping to guide policy or individual decisions about whether to get another vaccine, it has to be able to measure neutralization of the newest variants,” he said.

Owen and his colleagues relied on specimens provided by ARUP to develop and validate Neu-SATiN. Delgado and Marc Elgort, PhD, codirector of the ARUP Institute for Clinical and Experimental Pathology®, also shared feedback on various test design and development questions and are coauthors of a Nature Communications article that describes the development of the test and its results.

What Neu-SATiN Results Reveal About Immunity 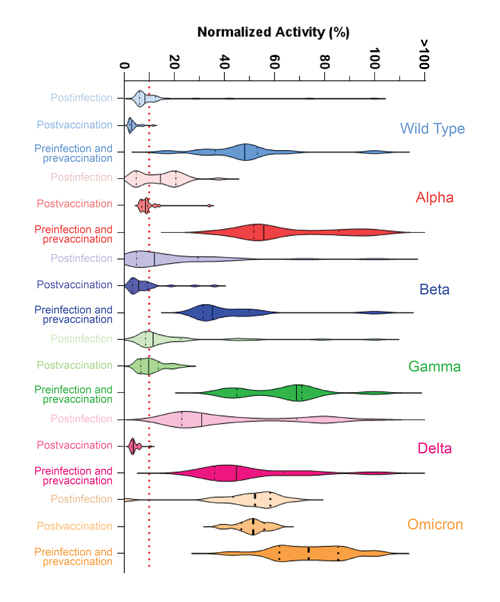 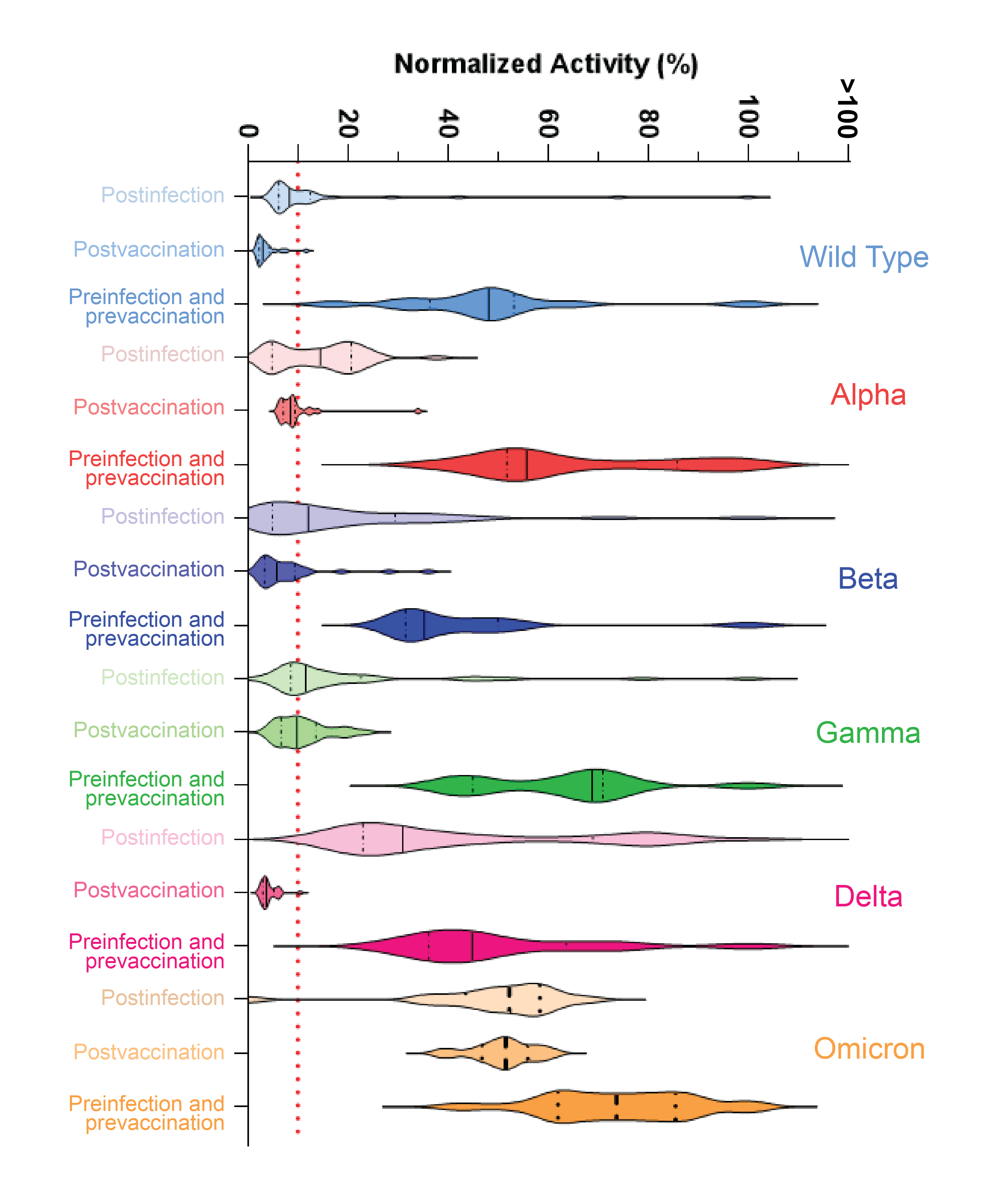 In all, 63 patients with different vaccination and natural infection histories were tested with Neu-SATiN, and testing concluded in November 2021, just as the Omicron variant of SARS-CoV-2 had begun to emerge. The researchers assessed the potency of patients’ neutralizing antibodies against the original strain of SARS-CoV-2 and the Alpha, Beta, Gamma, Delta, and Omicron variants, and found that for the majority of the strains, the neutralizing antibodies provided protection for three to four months, after which time their levels dropped by about 70%, irrespective of infection or vaccination status.

Neutralization differed somewhat by variant but was dramatically different for Omicron, Owen said. “Virtually no neutralization was seen for the Omicron variant,” whether the patient had been vaccinated, naturally infected, or both.

“This does not mean Omicron is like starting over, though,” he said. “The body does have a memory, and if you get reinfected, there’s a better chance that you can recover and that the second infection won’t be as serious. Vaccines are definitely helping with that.”

Owen was referring to another aspect of our complex and adaptive immune systems that helps protect against pathogens. Although neutralizing antibodies are key to understanding our immune response to SARS-CoV-2, our bodies over time also begin to call on T lymphocyte cells (T cells), a type of white blood cell, not to stop SARS-CoV-2 from infecting cells, as antibodies do, but to prevent propagation of the virus by essentially killing infected cells, according to Delgado.

He, along with Leo Lin, MD, PhD, ARUP medical director of Immunology and an assistant professor at the U, worked with former clinical immunology fellow Hemant Joshi, PhD, on Joshi’s development of an activation-induced marker (AIM) assay to characterize T-cell-mediated immunity to SARS-CoV-2. A poster Joshi created along with Delgado, Lin, and others about the test and his test results earned the Doctorate Award at the Association of Medical Laboratory Immunologists (AMLI) annual meeting held in Salt Lake City in August.

Currently, there isn’t an assay to characterize T-cell response to SARS-CoV-2 that has been approved by the U.S. Food and Drug Administration (FDA), although T-SPOT.COVID, a test developed by the British company Oxford Immunotec, has earned approval for use in the European Union.

Lin said T-cell response to infection is harder to tease out than antibody response because researchers must work with live cells. Specimen stability is shorter and interrogating specimens is more difficult. “You’ve got to have a way of isolating T cells and then making sure they’re alive and functional so you can test them,” he said.

In his research, peripheral blood mononuclear cells first were isolated from whole blood specimens, then were cultured in the presence of SARS-CoV-2 spike protein peptides. The cells were then stained with T-cell markers (cluster of differentiation 3 [CD3], CD4, CD8) and activation markers (CD69, CD25, CD134 [OX40], and CD137) to determine which combination worked best to detect spike-specific T cells.

He performed the T.SPOT test on all specimens to correlate his results, and found “excellent concordance.”

“Our findings demonstrate that SARS-CoV-2 spike protein peptides can be utilized to develop a technically feasible and clinically sensitive and specific assay for spike-specific CD4 and CD8 T cells,” Joshi concluded.

Importantly, the AIM assay also offers a potential advantage over the T.SPOT test because it can be easily adapted to test T-cell response to different variants as they emerge by changing the proteins used to stimulate the T cells, Lin said. “You can tailor it to any new variants of SARS-COV-2 that might emerge and to other pathogens as well.”

What’s Comes Next for SARS-CoV-2 Tests?

Neither Neu-SATiN nor Joshi’s AIM assay has a clear path to commercialization as of yet.

Owen said that his University of Toronto colleagues have taken the lead in pursuing partners who may be interested in commercializing Neu-SATiN. He added that he has had preliminary conversations with ARUP’s New Technologies Group to gauge interest in the potential to use the test methodology for other applications.

Lin said a next step for the AIM assay is to get the test results published.

Both tests, however, especially when considered along with related work other researchers are doing around the globe, hold the promise that we may one day be able to go to a healthcare provider for a test that will tell us whether we are immune to COVID-19 or another infectious disease, or perhaps tell us whether it’s time for another vaccination.

“COVID-19 has really accelerated so much research and discovery in immunology,” Lin said. “It’s led to the development of new testing and vaccine technologies that we can apply to future problems as well. The possibilities are really limitless.”

Where our test is really empowering is that it is modular and can be easily adapted for new SARS-CoV-2 variants as they emerge.”

How Neu-SATiN Works to Detect Whether Neutralizing Antibodies Are Present 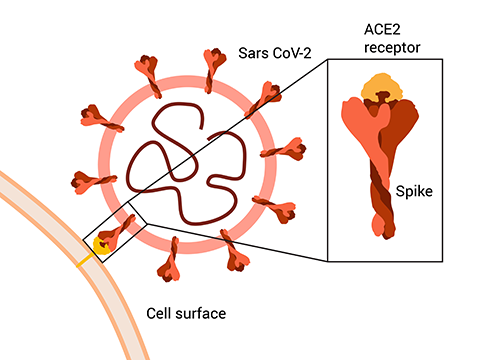 In the early days of the COVID-19 pandemic, employees at ARUP Laboratories and the University of Utah were first responders to the emerging crisis as they raced to validate tests and build much-needed testing capacity. Continue reading

Lisa O’Brien looked at her heart monitor in disbelief. During the past several weeks, she’d had erratic heart rates that varied tremendously from 30 beats per minute (bpm) to the dangerously high number that she stared at now: 220 bpm. Continue reading