ARUP’s Medical Experts Assist Clinicians in Selecting Laboratory Tests to Diagnose Autoimmune Neurologic Disorders
The first tremor was innocuous, akin to shivering from the cold. It seemed odd… more
ARUP’s New Autoimmune Neurologist Adds Unique Experience to Advance Understanding of Immune-Mediated Neurologic Diseases
As a child growing up on her family’s vegetable farm, Tammy Smith, MD, PhD,… more
A Passion for Pathology: Former ARUP Fellow Uses Next Generation Sequencing to Improve Patient Care
Eric Duncavage, MD, has a passion for pathology that thrives in the space… more
People Proud: ARUP Awards and Recognition
Every day at ARUP, our employees work to better the world around them through… more

The first tremor was innocuous, akin to shivering from the cold. It seemed odd, but J. Lowe Barton, a law enforcement professional who was working on restoring a classic vehicle, didn’t pay too much attention at the time. The tremors became harder to ignore, though, as they increased in regularity over the next few weeks.

Six weeks later, the tremors were occurring every four to five minutes and resembling seizures. If Barton was unlucky enough to be holding a soda can when one hit, his muscles would involuntarily contract and cause him to squeeze the can, spilling liquid over himself and anyone else nearby. Sleeping became next to impossible, and he would wake with blood on his face where he had scratched himself with his ring at night during an episode. He and his wife, Kathy, sought answers from doctors in southern Utah, where they live, but the clinicians weren’t able to provide any answers. Barton was otherwise in good health, and his magnetic resonance imaging (MRI) scans and infectious disease workups were unremarkable.

At the behest of his concerned daughter, Barton and his wife eventually made their way to the University of Utah’s Autoimmune Neurology Clinic, established by Stacey Clardy, MD, PhD, FAAN. By this time, Barton was also exhibiting faciobrachial dystonic seizures and short-term memory loss, both clinical manifestations of autoimmune encephalitis (AE).

Early recognition and treatment of AE are crucial for patients like Barton, but diagnosis can be challenging and time consuming. Fortunately, the synergistic relationship between ARUP Laboratories and the U enables clinicians to stay abreast of rapidly changing diagnostic approaches and work closely with ARUP medical directors to understand test results, ultimately improving patients’ lives.

AE comprises a group of noninfectious, immune-mediated inflammatory disorders of the brain. Some onconeural antibodies, such as antibodies that target antineuronal nuclear antibody (ANNA)-1 (also known as anti-Hu), have been implicated in AE for years and are classically associated with tumors. In recent years, though, antibodies such as N-methyl-D-aspartate receptor (NMDAR) and leucine-rich glioma-inactivated 1 (LGI1) antibodies, which target the neuronal surface or synaptic antigens, have been identified and may develop with or without a cancer association. 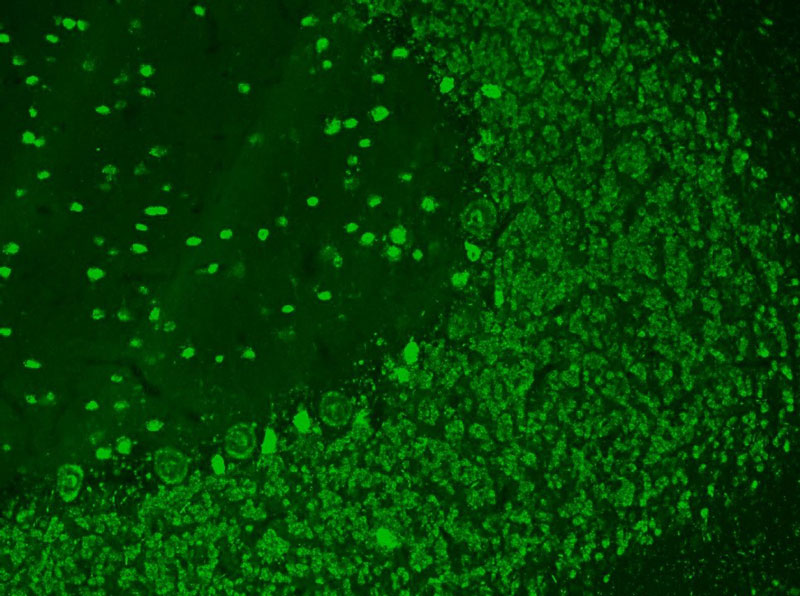 This immunofluorescent pattern is produced by serum-containing antibodies against ANNA-1 (also known as anti-Hu) on a section of monkey cerebellum. 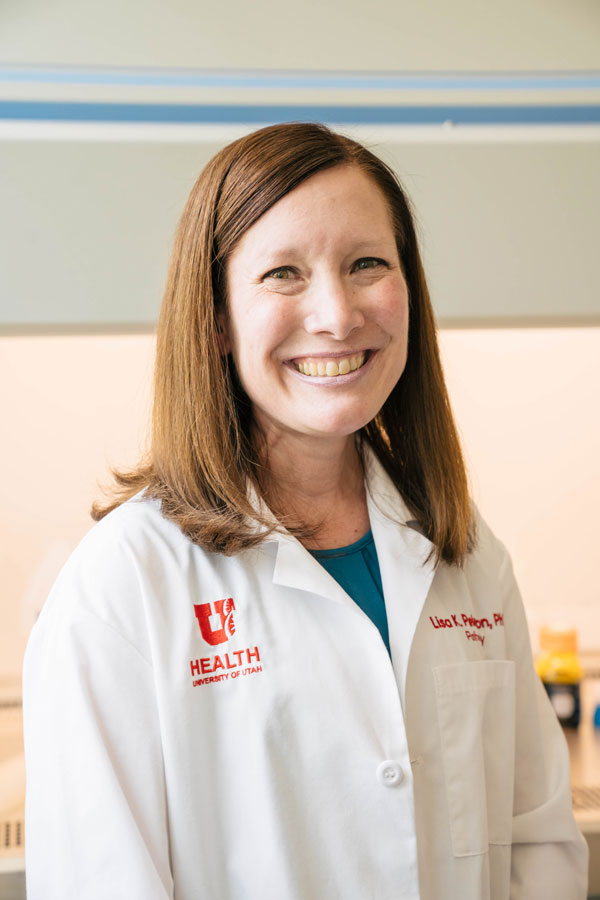 Lisa Peterson, PhD, D(ABMLI), medical director of Immunology at ARUP, completed her clinical immunology fellowship at the University of Utah and ARUP. Her research interests include cellular immunology and autoimmune immunology with a focus on autoimmune neurology

Although antibody testing alone cannot provide a definitive diagnosis of AE, paraneoplastic syndromes, or any related autoimmune neurologic conditions, the detection of autoantibodies in the appropriate clinical setting can help distinguish between similar disorders and inform further testing or medical management, said Lisa Peterson, PhD, D(ABMLI), medical director of Immunology at ARUP and assistant professor at the University of Utah School of Medicine.

Because the field is expanding so rapidly, general clinicians—often the first-line providers a patient like Barton might see—can’t be expected to stay abreast of developments in laboratory testing, Peterson said. “There are new antibodies described every few months. It’s impractical to expect general clinicians to stay up to speed on these.”

To assist clinicians in identifying the autoantibody testing that is most likely to yield positive results in their patients, Peterson and her team at ARUP developed a multitude of testing options, ranging from comprehensive panels, to cost-effective, disease-directed panels, to single autoantibody tests that can be used for monitoring treatment and disease course.

Peterson routinely consults with clinical pathologists about this topic but felt that it was equally important that ARUP bring on board an autoimmune neurologist who could serve as a clinical consultant. She envisioned this person as having an understanding of how the tests are performed and their limitations, as well as the ability to help clients interpret the tests and guide them toward next steps.

That’s where Tammy Smith, MD, PhD, comes into the picture. Smith joined ARUP in April 2022 as a clinically trained, board-certified neurologist. During Smith’s time at the U’s Autoimmune Neurology Clinic, where Barton was treated, she appreciated the unique relationship shared by ARUP and the U. “As physicians, we really relied on our relationship with ARUP and Dr. Peterson to help us better understand the testing options that were available to us and to discuss clinical testing in challenging cases,” Smith said.

During her time as an autoimmune neurology fellow at the Mayo Clinic, Clardy experienced firsthand the benefit of having a neurology clinic closely associated with a clinical reference laboratory. “Simply put, when I started the U’s clinic, not many neurology departments had the vision to understand how [this relationship] could be successful, but the U did,” said Clardy. “Having a close partnership with ARUP allows us to diagnose our patients much faster and more efficiently than most any other location in the country.”

While Smith was an autoimmune neurology fellow in Clardy’s program, she rotated with Peterson at ARUP. “Many physicians don’t have the opportunity to see how clinical laboratory testing is done,” explained Smith. “Because of my PhD in microbiology and immunology, I was familiar with a lot of the techniques, but I was just very interested in seeing how clinical laboratory testing happens.”

Smith’s interest in continuing to do basic science research and see patients was intriguing to Peterson, who sees Smith as uniquely situated to bridge the gap between clinical practice and the laboratory. “She brings in the experience of having seen patients, of determining the appropriate tests to order, and of being able to understand and interpret results in a clinical setting,” Peterson said.

Because the majority of autoantibodies are extremely rare, most have low positivity rates. Therefore, reliable autoantibody identification is highly dependent on determining the likelihood that a patient will test positive for any given antibodies. To obtain the most actionable information from autoantibody testing, it makes the most sense to order a targeted panel based on the clinical presentation of the patient, Peterson said. “If you consider how the patient presented, their history, and their clinical and imaging exams, you can start to parse out which tests are most likely to be positive.”

Moreover, if there is a high pretest probability of a known syndrome, Smith said, waiting for the results of antibody testing should not delay treatment. Some antibody-mediated disorders can be severe and even life-threatening, but may be reversible with prompt and appropriate treatment. Even so, the results of antibody testing help support clinical decision-making when it comes time to consider long-term management options and prognosis, explained Smith.

Fortunately, Barton’s condition was one that responded to treatment. Barton was diagnosed with LGI1 antibody encephalitis, a form of AE for which early treatment may prevent long-term cognitive deficits and reduce seizure activity over time.

Kathy Barton recalls the neurologist at the U telling her that they were fortunate to have gotten her husband in when they did. “They told me that if J.’s illness had persisted much longer, he may not have recognized me in a few months’ time,” she said. It took many years of immunosuppressive therapy to treat his illness, but today, Barton has completed his treatment plan and lives a full and happy life with Kathy.

“Dr. Peterson and her team are devoted to this patient population and care deeply. They never fail to bring all of the resources ARUP has available to benefit our patients,” said Clardy. “Our patients benefit despite never knowing what’s required behind the scenes to make it happen.”

Stories like Barton’s keep Peterson and Smith focused on ways they can continue to advance patient care. Importantly, Peterson and Smith will work with Clardy’s autoimmune neurology fellows during their rotation at ARUP in an ongoing effort to share knowledge about the intricacies of neural antibody testing.

“An autoimmune neurologist needs to understand the details of this testing to avoid misdiagnosis and misinterpretation of low-positive results,” said Clardy. “Understanding which test results are relevant in each given clinical context is essential to know when to utilize—and importantly, when not to utilize—available therapies,” said Clardy.

For her part, Peterson said that she is always collecting positive samples for new antibodies and plans to validate several to add to ARUP’s test menu in the coming year.

“ARUP was one of the first laboratories in the country to offer testing for NMDAR antibodies. I want to continue on that path of identifying new antibodies and understanding the pathogenesis behind these diseases because that will ultimately inform and improve therapies for patients,” Peterson said.

Smith plans to continue to conduct basic science research at the VA Salt Lake City Healthcare System to study the mechanisms behind paraneoplastic syndromes and neurologic disease. She and Peterson are also collaborating on a study to determine the value in testing for autoantibodies in both serum and cerebrospinal fluid (CSF).

“There’s so much room in this field to improve patients’ lives,” Smith said. “We’re still in the infancy of understanding these diseases, how we test for them, and how we treat them. In five years, the story we tell will be different from the one we tell today.”

Autoantibody Testing in the Diagnosis of Autoimmune Neurological Disorders

As a child growing up on her family’s vegetable farm, Tammy Smith, MD, PhD, spent a lot of time thinking about the rhythm of an ecosystem... Continue reading

Understanding which test results are relevant in each given clinical context is essential to know when to utilize—and importantly, when not to utilize—available therapies."