There are different approaches to managing patients with treatment failure in response to TNF antagonists; one approach is to monitor drug levels and ADAs. A new guideline from the American Gastroenterological Association on therapeutic drug monitoring in inflammatory bowel disease recommends that physicians should perform reactive therapeutic drug monitoring to guide changes in TNF antagonist therapy.1

Current methods for ADA detection are complicated by the fact that most TNF antagonists are antibodies and by the complexity of measuring antibodies against antibodies in nonfunctional binding assays. More importantly, all non-ARUP methods fail to differentiate binding from neutralizing ADAs.

ARUP’s TNF antagonist drug and neutralizing antibody assays are cell-based bioassays that measure the ability of a drug to inhibit TNF. The assays also detect the presence of antibodies that neutralize drug activity. Emergence of these neutralizing antibodies in a patient leads to treatment failure. Other methods detect ADAs that bind to the drug, but unlike ARUP’s assays, these methods are not able to distinguish whether the antibodies neutralize drug activity or not. 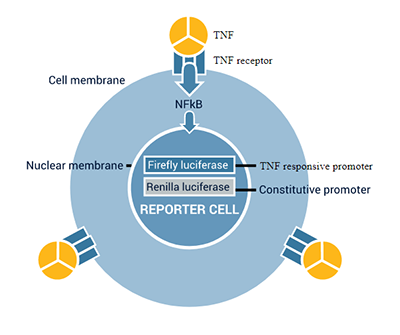 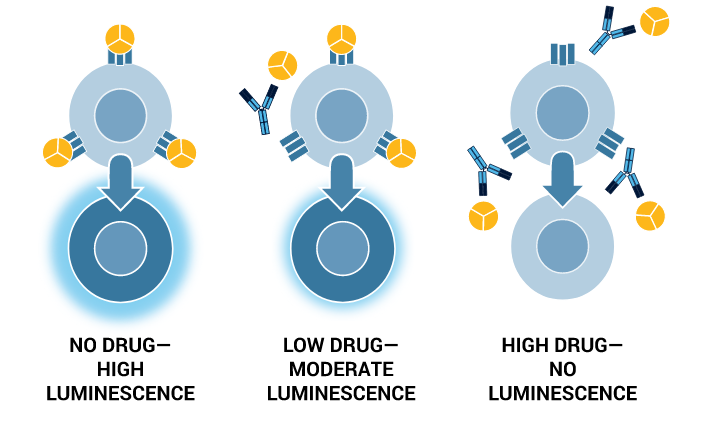 Serum of a patient taking a TNF antagonist drug is mixed with TNF and added to the cells. If the drug is present, it will block the activity of TNF, decreasing luminescence. Serum concentration of a biologically active TNF antagonist drug can be calculated using a calibration curve.

Some patients develop antibodies to the drug. In the presence of neutralizing antibodies, the reporter gene is turned on despite the presence of exogenous drug in the assay. The antibody titer is obtained by identifying the dilution point of a patient’s serum at which blocking of the drug activity is no longer observed.

The functional reporter gene assays were clinically validated for diagnosing and monitoring TNF antagonist treatment failure. Currently, the ARUP assays are the only clinical assays available for the detection of biologically active TNF antagonist drugs and ADAs with drug-neutralizing function, as recommended by the FDA.

The ARUP cell-based assay is inherently more reflective of the in vivo environment in tissue and circulation in which TNF antagonist drugs are believed to function. The assay can easily be adapted for all known anti- TNF drugs.

How It Compares With Other Tests

The main difference is that ARUP's test measures bioactivity of the drug and of the neutralizing antibody. See the table below for a comparison of methods to monitor ADA levels in serum.

Based on ARUP's internal validation data, the CVs are less than 20% for both the drug and the drug-neutralizing antibody measurements.

The most effective timing for the test is just prior to the next treatment when the drug level is lowest in the patient (at trough). This is the time when information about drug metabolism can best be determined. Accurate levels of ADAs cannot be measured if the patient is tested immediately after IFX/ADA treatment. The overwhelming amount of drug will absorb the ADAs and will interfere with its detection. This is true with all tests regardless of the methodology used. The minimum amount of time required after the last infusion for testing will depend on the pharmacokinetics and pharmacodynamics of the drug in each patient. In general, it should be at least 72 hours after treatment and we strongly encourage testing right before the next treatment. The bioactivity measurements of the iLite assay used in ARUP's test has a lower possibility of false negative results for ADA measurements compared to traditional methods using solid phase ELISA.